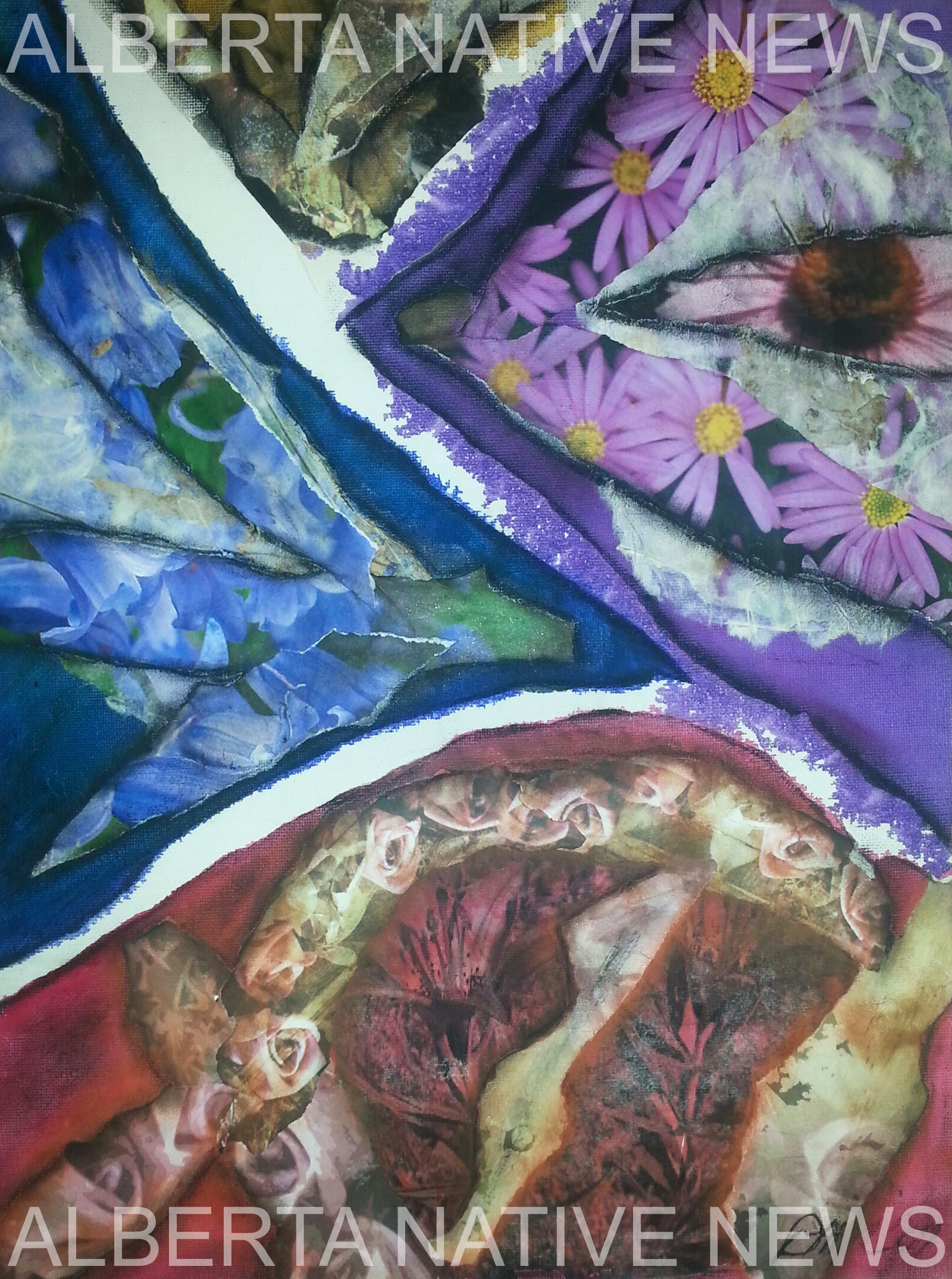 The beautiful painting on this month’s cover of Alberta Native News, entitled “Summer in Manitokan,” was created by artist Dawn Marie Marchand and given to her mother in honour of Dawn’s older sister, who passed away from breast cancer in 2009. It is very meaningful for her family.

Marchand is a multi-talented Canadian artist who hails from Alberta’s Cold Lake First Nation. A contemporary artist of Cree/Métis ancestry, her beautiful paintings and canvas creations can be found in private collections across western Canada and beyond. A multi-talented individual, artist Marchand is also an author, an educator, a workshop organizer and host, a conference coordinator and a special guest speaker. She’s also an advocate for using the strengths of art and culture as a tool for accessing positive change in peoples’ lives.

As a student at the Boreal Forest Institute for the Indigenous Arts in 1996, Marchand found herself in an active and fertile environment, one that helped shape her future and encouraged her on to further education. 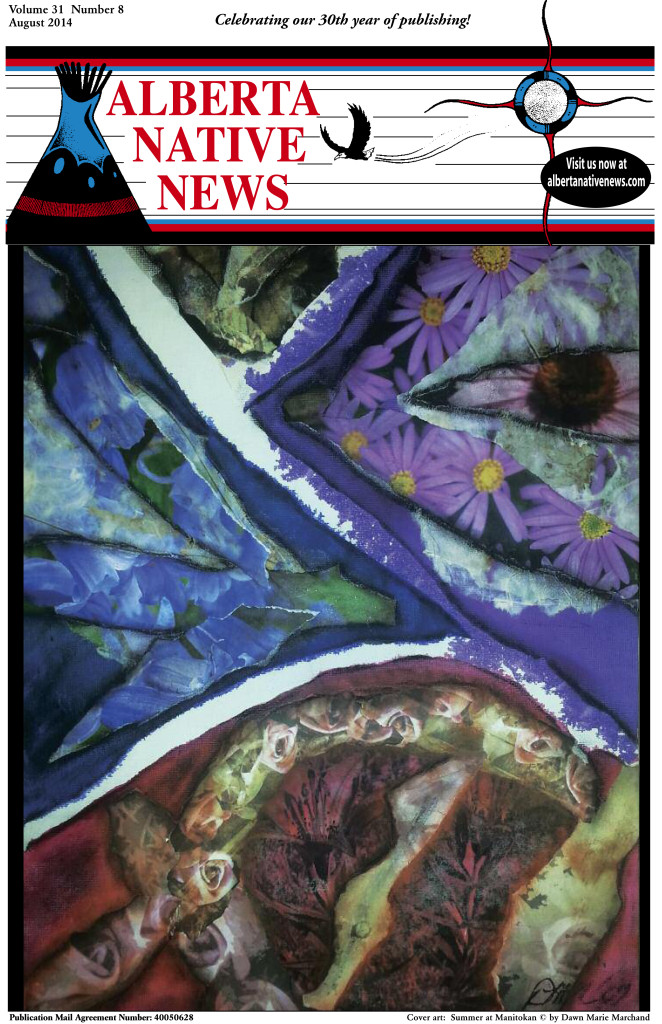 “I was very fortunate to have some of the greatest teachers and mentors of our time share their expertise and their wisdom with me and my fellow students,” she reminisced. “I was greatly influenced by all of them, and that influence remains with me today. I was very fortunate; not everyone has Alex Janvier, Joane Cardinal-Schubert, Jane Ash Poitras, Brian Clarke, Edward Poitras and Rebecca Belmore as their art teachers.”

Marchand’s beautiful creations capture their audiences with a mixture of contemporary, abstract and realistic Aboriginal art that tell stories, express ideas, educate the ignorant and capture what the artist sees as she looks at and studies important issues that face both Indigenous and non-Indigenous peoples and communities. She utilizes visual essays and studies the atmosphere, the actions and the reactions of everyday life, be they political, social or personal. She calls upon the artistic teachings passed on to her from her teachers and her peers; the result of which provides a collage of mixed media accomplishments that focus on the issues facing Aboriginal peoples today.

“I often meditate and contemplate the teachings passed on to me from my grandmother,” she said. “I utilize the oral histories of our people, I delve into prayer and ceremony and I try to capture the essence of who we are and what we are trying to accomplish. My paintings pay tribute to Aboriginal peoples, their cultures, languages, spirituality and traditions and at the same time offer insight into the past without predicting the future.”

There was a time in the artist’s life when she was depressed and uncertain, a span of time that prohibited her from putting brush to canvas.

“I remember what Alex Janvier once said during art class: ‘Don’t try to paint and create when your spirits are low, when your head is heavy or when you are in despair.’ I took that advice to heart, so there was a period of time when my creativity came to a standstill.” 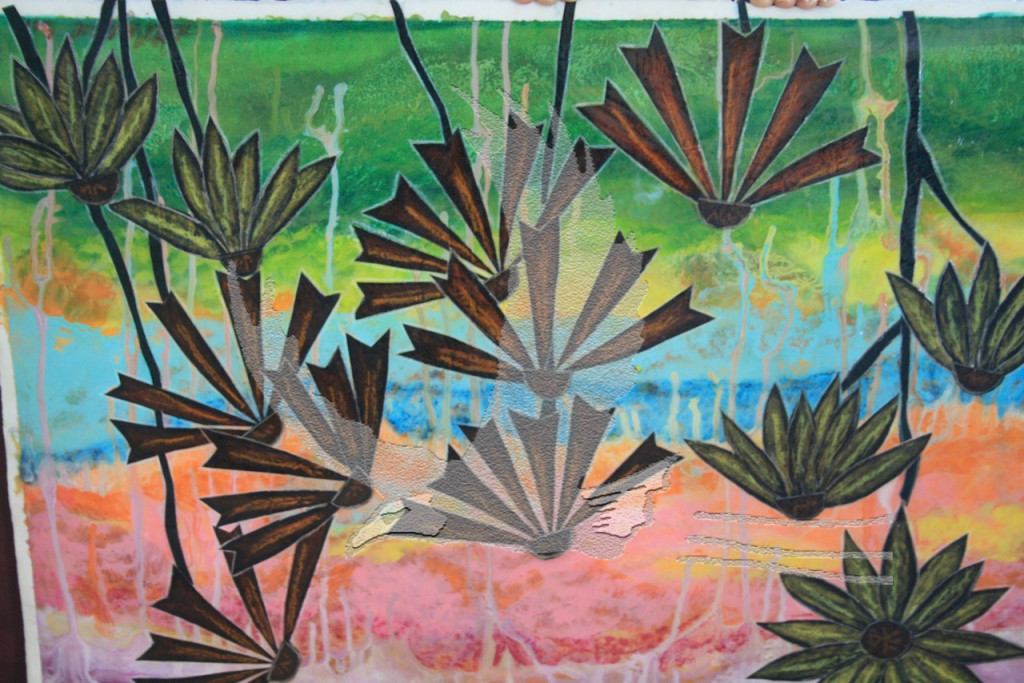 But the darkness eventually lifted, replaced by a dim light that continues to grow in intensity.

“Once I found a shining light, I was able to proceed,” noted Marchand. “Painting saved my life; taking a break through the dark times allowed me to recuperate and move forward as a person and as an artist.”

Dawn Marie Marchand’s website is filled with her creations. From $25 postcards to large $2500 masterpieces, viewers will find a wide range of varied subject matter, unique expression and a bold range of colour and symbolism. Whether you are seeking a personal piece of art, buying gifts for family and friends or looking for a meaningful piece to offer as a gift for a presenter, award winner or scholastic achiever, you will find what you are looking for when you check out the work created by this outstanding artist.

As a former educator Marchand utilized her art and her culture in her work with students, many of whom were at-risk youth.
“I spent many years using my artistic abilities to work with at-risk youth through art integration to get them expressing their knowledge or creating safe spaces to confront and heal from trauma,” she explained. “I believe that art is a beneficial tool when it comes to helping people overcome grief, trauma and stress. It’s also an aide in helping to improve self-esteem, developing a positive outlook and creating self-assurance.”

Unfortunately, the school district ended up cutting the art integration program that Marchand was working with. “It was very disappointing,” she noted. “It was a very effective program that was making a positive difference in the lives of many students.”
In the past year the artist has been particularly busy. She attended and participated at the Truth and Reconciliation Commission’s Final Hearing in March, the annual Kehewin Treaty Days event, on CBC MainStage and at the Edmonton Works Festival. She is also continuing to utilize the “paper brick gazebo” that she first introduced during the March 2014 TRC Hearing. The installation comprises hundreds of paper bricks, each with its own personal story about residential school life and survival. The project is an entity that Marchand calls “A Place To Hang Your Stories, a place where survivors and their families can begin to take empowerment of their lives.”

The project was inspired by the Walking With Our Sisters Project, an initiative that saw hundreds of people from across North 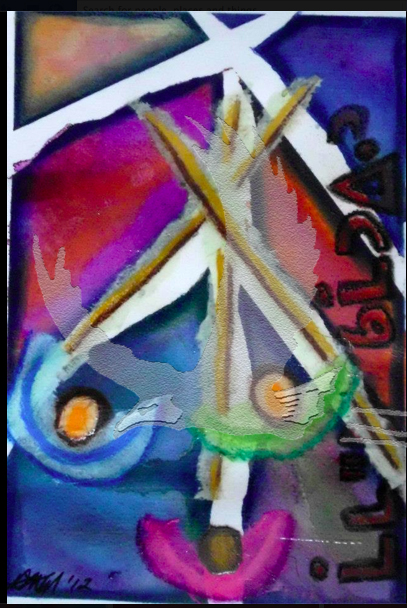 America submit more than 1700 pairs of moccasin tops to honour the unfinished lives of missing and murdered women.
“The project has met with some outstanding success,” assured Marchand, who said paper brick-lined gazebo had drawn interest across the region. “In one session I spoke with 56 people and more than 70 bricks showed up. The interest was high and we received a 90 percent positive feedback rating. The interest was high among both Aboriginal people and the many non-Aboriginal people who visited the project at City Hall.”

The installation will be at the Indigenous Family Centre on Selkirk Avenue in Winnipeg, Manitoba from August 20-31, before returning to Edmonton, where it will join the 2014 Kaleido Family Arts Festival on 118 Avenue between 90 and 94 Streets on September 12-14.

The artist has spent months reaching out to survivors, and continues to do so as she works to encourage those affected in one way or another by the residential school era, to create their own personal stories on a 13” by 9” paper brick using any of the numerous art media, including paint, crayon, charcoal, feathers and bead work.

The outside of the exhibit symbolizes the memories shared by survivors and their families while the darkened inside of the exhibit comprises a small classroom, a blackboard, a small light and a single desk, items designed to “symbolize the small classrooms, the poor learning environment and the harsh realities that took place” during the 150-plus year era of the residential schools.
Marchand is confident that the project is gaining interest and support and is meeting its goal of introducing Canadians from all walks of life to the realities and the impacts of residential schools on Aboriginal people.

“This isn’t an Indigenous problem,” she emphasized, “this is a Canadian problem and only by understanding one another and working in unison to achieve similar goals, will we see the education of Canadians and healing of Aboriginal people come full circle.”
During the past year Marchand has co-ordinated and co-founded the Cree8 Success Conference, an initiative that provides teachers, social workers and corrections officers the Contemporary Art tools and appropriate resources to engage Aboriginal Youth. She is also an outspoken advocate for First Nation, Metis and Inuit Grassroots people – artists in particular. She has been working towards creating dialogue between local grassroots artists, art organizations and the general public. Public discussions were developed during the 2013 Rubaboo Festival and at the art installation at the Edmonton International Folk Festival.

“I can and have developed numerous discussions for a number of organizations over the years,” noted Marchand. “I work with clients to ensure that proper information is targeted and provided. I’ve also completed independent research on such things as: Decolonization through Art, The Treaties and the Indian Act, the Papaschase First Nation and Differentiated Learning Strategies.”
Marchand said that she’s good at two things: “Art and engaging at-risk Aboriginal people” and explained that she started her business “because it was a way that I could continue to do what I was best at. I don’t really consider it a business; it’s just who I am.”
Two of the things that have given Dawn Marie Marchand the most pleasure and satisfaction include the Cree8 Success (eight Aboriginal artists from different genres gathered together to share their styles), and traveling on the road to share and hear stories with Indigenous peoples, including those affected by the residential school era.

“It is a very humbling experience and one that I hold close to my heart,” she assured. “As the installation makes its way throughout the various communities in the months to come, I hope the support continues to grow and that Canadians become better aware so that eventually we will all work together with common understanding and mutual respect.”

Dawn Marie Marchand is always seeking new ways to engage both kids and adults in “some artistic fun” and in doing so has developed half-day, full day and multi-day workshops. She also offers guest speaker services that focus on such things as Aboriginal education, storytelling and building resilience in Aboriginal youth.

For information about Dawn Marie Marchand, and to learn how you can purchase her art, utilize her workshops and/or secure her as your next special guest speaker, check out the website at www.dawnmariemarchand.com or send an email to: [email protected]

Be the first to comment on "Featured Artist for August, 2014: Dawn Marie Marchand"