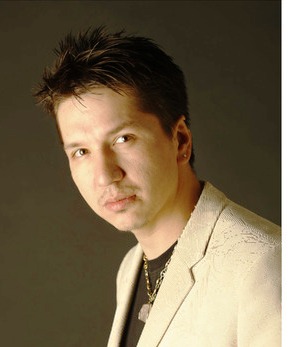 Stardom ain’t what it’s all cracked up to be. Nobody knows that more than Dakota House, better known as TeeVee, the troublesome lad on that ever-so-popular television series, “North of 60” that ran from 1990 until 2003.

Born in northern Alberta, House almost became an army brat until one day his mom spotted an ad looking for a young Native actor and model. She encouraged her son to apply and he figured, what the heck, he’d give it a shot. The rest, as the old saying goes, was history.

He got a call back and received a scholarship to attend acting school. After that, “everything just snowballed,” he explained. It was quite a change for this teenager from the northern bush. Almost overnight, stardom descended. He went from one day “hanging out on the streets with his friends to being in front of a camera and flying all over the country.” 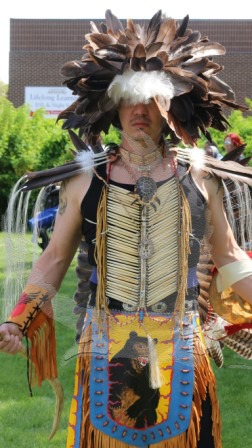 Actor Dakota House makes his appearance in traditional dress at the Bosco Society powwow this summer in Edmonton.   Article and photo by Terry Lusty

Then came the newspapers and reporters, people wanting to do interviews and “everyone in your face all the time, taking pictures,” he said.

Ah yes, the price of success. “I don’t think anyone can really understand the scope of giving up your complete privacy; it was like living in a fishbowl,” he said. “Everyone was looking in, judging you, pointing fingers but not really knowing you.”

Along with all that came the parties and the alcohol. It got out of control. But that wasn’t all. It swiftly got to be even more overwhelming , especially when he got into a relationship and started a family. His life became a juggling act filled with difficulty.

As if that wasn’t bad enough, some of his buddies got into a whole jealousy trip and one day, several of them ganged up on him. They used a two by four, beating him within an inch of his life. He lost a chunk of his ear and all his hearing on that side. He had a near death experience, saw that “what a wake-up call, white light” of heaven and spent a whole month in intensive care. “It took six months to learn to walk a straight line again. It was definitely a wake-up call. I look and laugh about it now but I say: That was the Creator giving me a bump on the head, saying wake up!”

Now that he’s away from the movie life, he travels all across Canada delivering good messages to thousands of youth, explaining what he went through and how it very nearly cost him what we cherish the most – life itself.

House has tasted sobriety for over ten years now. He walks that Red Road and is true to his convictions. The last thing he wants is to return to that traumatic lifestyle that calls so many of our Aboriginal people well before their time. This he does through the program Going Miles which he founded and believes can be something positive for Aboriginals to connect with.

Miles is actually an acronym for; “motivate, inspire, lead, empower and succeed,” he said. Travelling to communities, he tries to provide youth with hope and direction while passing on teachings and skills that he has learned through his life.

“It was an alcohol-fueled jealous rage that these guys went into ” and the fact that “I myself was still drinking and had that false sense of security so I couldn’t see what was going on until it was too late,” explained House and he wound up hospitalized and almost a dead man.

Today, he keeps his life a very private matter as he raises his three daughters as a single parent.

Although he has no immediate plans of getting back into the movie scene, House wouldn’t pass up a good part if the opportunity presented itself. He’s had a taste of directing and writing but his life and his family are a priority at this time and he continues to share his professional life and skills.

He’s thankful Creator has given him another try at life and he does not aim to disappoint.

House enjoys giving back to the community, seeing those young eyes light up, making a difference and helping our young people make positive changes in their lives to succeed.

“Life is what you make it,” he philosophizes, “not what it makes you.” Regardless of where you come from, even tiny communities, “you can be anything that you want,” he added.

On a more final note he tells youth to believe in themselves. “If you want to get into the film industry, don’t let anybody tell you that you can’t. If they laugh at you, maybe it’s just because they want to do that too.” Kids tried to pull that on House, telling him he was stupid and that he was wasting his time. We know different.

The other message House wishes to put out there is for Aboriginals to work together, come together as one nation, one people and quit fighting with each other. He wants people to stop fighting one another and holding grudges. “Everyone’s the same, we’re all on one level!” he concluded.

26 Comments on "Some sobering remarks from Dakota House"