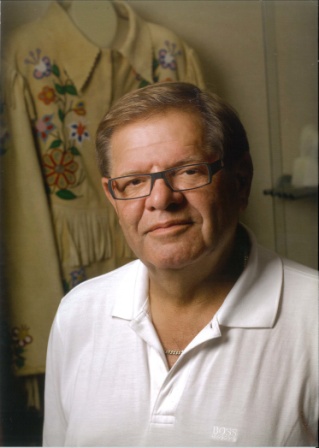 Retired from Exxon International, Mr. Benson has been on the board of directors at Suncor Energy since 2000, serving on the compensation and environment, health and safety committees. He also sits as a Director of the Fort McKay Group of Companies and as a Director of Oilstone Energy Services, based in the USA.  A member of several charitable organizations, Mr. Benson prides himself on being active in his community. He’s taken numerous leadership positions in this capacity, most recently being appointed to the advisory council for the Alberta Land Institute through the University of Alberta.

The CCAB and ESS Support Services also announced the 2015 recipient of the National Youth Aboriginal Entrepreneur Award: Kendal Netmaker, owner of Neechie Gear Inc. from Sweetgrass First Nation, Saskatchewan.  This award recognizes an up-and-coming Aboriginal entrepreneur under the age of 35.

Kendal Netmaker is founder and CEO of Neechie Gear, a lifestyle apparel brand built to empower youth through sports. He has successfully grown his business from a university project to a national name brand.

Kendal grew up on Sweetgrass First Nation, as a single-parented child he came from a low-income family and had little opportunity to be involved in any extra-curricular activities. As a result he felt compelled to give back by donating a portion of Neechie Gear’s profits to help fund underprivileged youth, allowing them the opportunity to take part in extracurricular sports.

Erin Meehan, president of ESS stated, “Melvin Benson joins a storied list of past Aboriginal Business Hall of Fame inductees who like himself used business skills over the course of a lifetimes work to foster optimism and potential in the world of Aboriginal business.”  Meehan added about the National Youth Aboriginal Entrepreneur Award, “Kendal Netmaker is an inspiration born of hard work and the commitment to live and build his dream.”

This year is the 10th year of the ABHF’s recognition of the outstanding achievements of Aboriginal business leaders from across Canada. JP Gladu CCAB president and CEO stated, “We are deeply honoured to be celebrating another leader who has made community and business leadership throughout his career the stepping stone to evolving his business endeavors into the success we are so proud to celebrate.”   2015 also marks the second year of the exciting new National Youth Aboriginal Entrepreneur Award.  Gladu stated, “Kendal is the new face of Aboriginal business, it’s a young face reflecting our people and the optimism that his success represents to all Aboriginal Canadians, young and old.”

Click here for more information on past Laureates in the Aboriginal Business Hall of Fame.