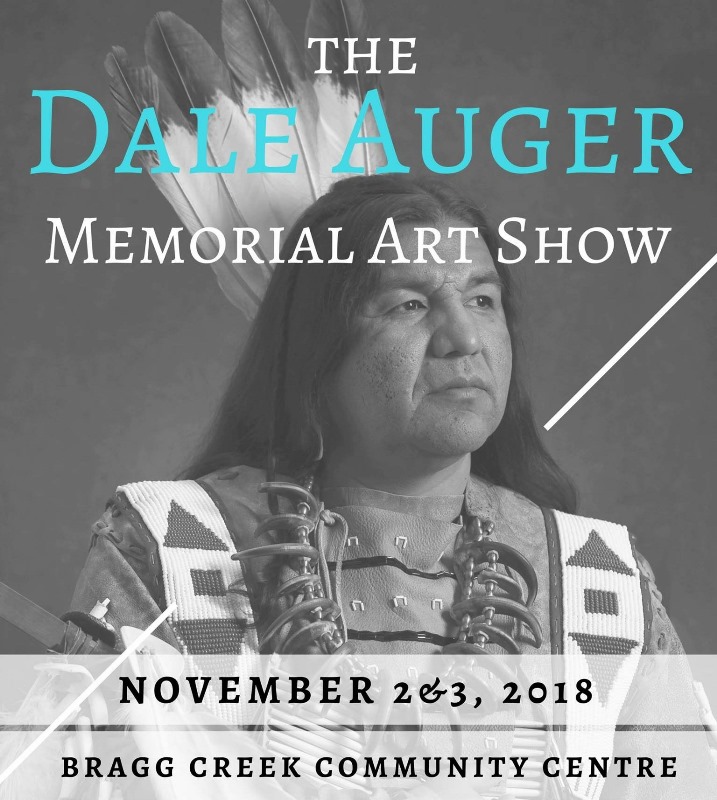 by John Copley
On November 2-3, 2018 more than 20 First Nation and Métis artists from across B.C., Alberta and Saskatchewan will gather together at the Bragg Creek Community Centre in southern Alberta to celebrate the life of First Nation artist Dale Auger, who passed away in 2008, after losing a battle with colon cancer. The Dale Auger Memorial Art Show was inspired by Dale’s daughter, Neepin.
“My dad initiated the art show back in 2004 and it took place each year until his death,” she explained. “I held it once after his death, but 2018 marks the 10th anniversary of his passing and I wanted to bring everyone back together again to celebrate his life and his accomplishments. On Friday, November 2, we’ll sit around and talk about what we’ve all being doing for the past decade and while we’re doing it we’ll share a few drinks, tell some great stories and watch and listen to some outstanding entertainers, including traditional dancers and drummers.
“We’ll be open and available all day Saturday and of course, all of the artists will be there and they’ll be selling their work. It’s a great time for the community and art lovers and collectors everywhere to come out, meet the artists, share some stories and purchase some beautiful art. A few pieces of my dad’s work will also be available. There will be something for everyone, for every budget and even if you aren’t in the market just now I encourage you to visit with us, meet the artists and celebrate Indigenous art of all types and forms.”
Sculptures, paintings, prints, bead work, ribbon shirts and much more await those who venture out to the Bragg Creek Community Centre, located about 40 minutes west of Calgary on Highway #8.
“I am very proud that so many of the artists I contacted have agreed to come and participate again this year; many of them were close friends with my dad. This will be a powerful gathering; it’s rare to see so many talented Indigenous artists come together under the same roof to work together and show together.”
Neepin Auger is a Cree artist, educator, author and when the occasion arises, a gifted keynote speaker who specializes in talking about children’s education. She’s also a mother to daughter Gracie, something she’s said is “the greatest masterpiece” of her life. Originally from the Bigstone Cree Nation in north-central, Neepin now makes her home on the Tsuu T’ina Nation near Calgary. She’s been painting for about two decades. 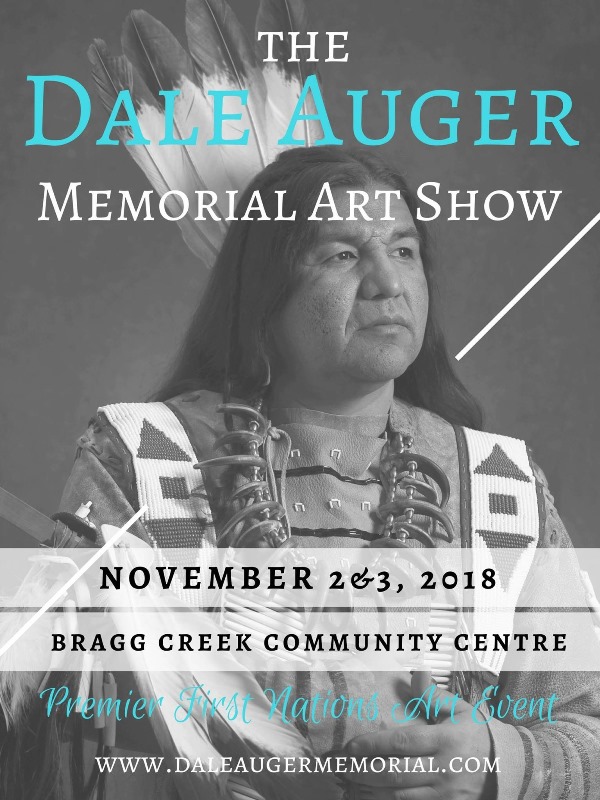 “I studied art under my father and I think that’s also where I got my inspiration to write books for children,” she said in a recent interview. “My dad’s award winning book, Mwakwa – Talks to the Loon: A Cree Story for Children (Heritage House, 2006) was named the winner of the Aboriginal Children’s Book of the Year Award in 2006 (Anskohk Aboriginal Literature Festival and Book Awards).
“It’s a story about a young Cree man who is blessed with a gift that makes him a talented hunter who knows the ways of the creatures he hunts and can even talk to them in their own languages. But when he becomes proud and takes his abilities for granted, he loses his gift, and the people grow hungry.”
To get the rest of the story you can find the book online at Heritage House Publishing,  Amazon and other book sellers.
Neepin’s books include a two educational series for children. The first, Discovering Numbers is an English, Cree and French  primary level, 12-page board book designed to introduce basic counting. The numbers are accompanied by simple, colourful drawings of creatures such as fish, butterflies, owls as well as objects such as teepees, sweetgrass, feathers and arrowheads.
The second series, Discovering Words, takes on the same format, languages and is designed for the same audience but is 28 pages in length. The book is designed to introduce basic vocabulary for the English alphabet. Children are taught words such as apple, canoe, drum, loon, moccasin, sweat lodge, teepee, and x-ray.
Neepin is a graduate of the Department of Education and Schooling at Mount Royal University in Calgary.
Dale Auger,  a Sakaw Cree artist and storyteller from the Bigstone Cree Nation, was just 50 years old when he passed on. As a young boy he went to school in Faust, near the Driftpile Reserve, where his knack for painting brought him recognition as the “school artist.” He attended the Alberta College of Art in 1988, and studied at the University of Calgary for 10 years, obtaining a master’s degree in education in 1996 and a PhD in education in 1999. He lived in Bragg Creek, Alberta, until his untimely death in the fall of 2008. He was posthumously honoured as the 2009 inductee into the Western Art Show’s Hall of Fame at the Calgary Stampede.
“My dad was a great artist but he was also a great father and a friend to many,” noted Auger. “We still miss him a great deal and this upcoming art show will give his friends, clients and followers the opportunity to come out and celebrate his life with us. Everyone is welcome.”
Some of the artists who will be attending the Dale Auger Memorial Art Show include Gary McDonald, Jamie Starlight, Ray Keighley, Graham Pettman, Kristy North Peigan, Gordon Wesley, Ernie Scoles, Delree Dumont, Leo Arcand, Kevin Peeace, Eric Lee, Melany Parsons, Keegan Starlight,  Neepin Auger and others.
Artist Gary McDonald lives in Grande Cache and is a member of the Aseniwuche Winewak Nation. He carves on stone, antler and wood and gets his inspiration from the hide tanning tools used by his Elders.
Ray Keighley is a Cree Métis artist who was born and raised in the foothills of Alberta. He has family roots to the Sucker Creek First Nation north of Lac La Ronge. His work varies from realism to a more abstract conceptual practice. He has extensive experience as a painter and print maker and enjoys working on everything from small pieces to large murals. Indigenous content often gives an added creative energy to his work, reflecting the artists balance between his ethnic origins, his life and his work.
Graham Pettman uses his Cree background to create animals and people with legendary stories and feelings. His Native heritage in the integration of the symbols nature displays. He derives his inspiration from the stone he chooses to carve. He considered himself fortunate to be able to live in an area where he can participate in Indigenous culture.
Kristy North Peigan is a spirited young artist and a graduate of the Alberta College of Art and Design. She has a passion for producing fantastical works for both the personal and commercial market and utilizes media forms that include everything from traditional to digital.
Artist Leo Arcand was born in 1968; he’s a sculptor from Alexander First Nation near Morinville, Alberta. He draws his inspiration from his deep spirituality and his strong belief that balance is necessary in all things.
Keegan Starlight hails from Treaty 7’s Tsuu T’Tina First Nation. He is skilled in animation, design and instructing art. He began exploring his skills with pens, pencils and charcoal – and in 2008 took up the brush and began to paint.
Jerry Whitehead is a Cree artist from Saskatchewan’s James Smith Band. As a child he was inspired by Indigenous dancers and his paintings reflect the visions of his Elders and his own observations of powwow regalia.
Delree Dumont worked in the oil and gas industry for 32 years and in 2014 picked up a paint brush and began painting full time. She discovered pointillism and in 2014 began to create, noting that she hasn’t looked back since.
Eric Lee specializes in engraving silver, bezel set buffalo horns, moose antler and semi-precious stones. His designs incorporate Indigenous Plains Cree motifs in a unique contemporary style.
Artist Audrey Nanimahoo said:  “I knew I found my calling in life the first time I picked up a piece of stone and began to carve the surface of it. It is something far beyond what I can explain; I felt as if the Creator had given me a powerful gift.”
On November 2-3 – just weeks away – take the time to visit with these and other well known Indigenous achievers in the world of art.
For more information call Neepin at 403-606-4224 or see the website.  Neepin can be reached via email to: [email protected].