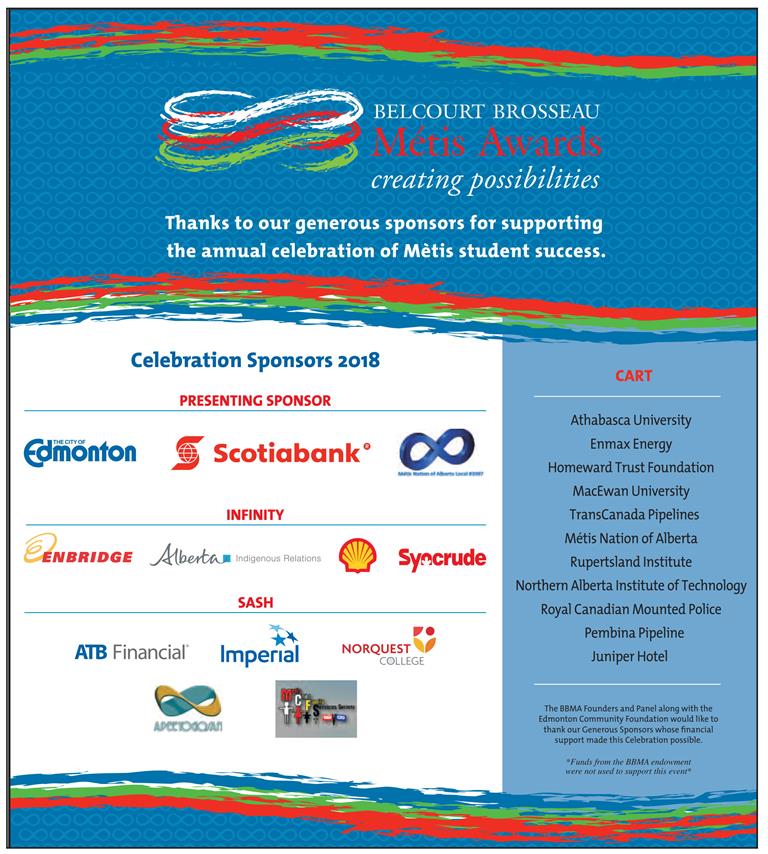 (ANNews) – On Saturday, September 22, 2018 the Belcourt Brosseau Métis Awards (BBMA) initiative celebrated yet another milestone and for the 17th consecutive year honoured deserving Métis students whose hard work and determination is enabling them to succeed.

Fred Keating co-emceed the event with BBMA alumni and clinical psychologist Christie Ladouceur. They got the ball rolling just after 4:30 p.m. with Brianna Lizotte, a talented young Métis musician who provided relaxing fiddle music for the 400-plus guests who gathered to celebrate the achievements of BBMA award recipients and this year’s attending Sash Ceremony recipients. Lizotte was also commended for her continued contributions as a volunteer and mentor within the Métis community and for her lengthy tenure with the Red Deer Royals, a prestigious concert and marching band that has been performing for the past 41 years.

Keating and Ladouceur introduced the many special guests, dignitaries, government officials, sponsors and Elders attending the evening event. An opening prayer by Elder Doreen Bergum was followed by the singing of both the Canadian and Métis national anthems by well-known vocalist Sarah Wolfe. 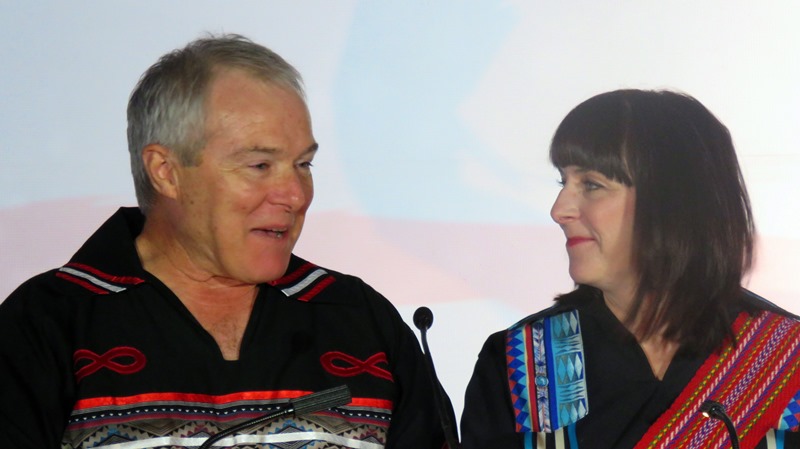 “Today,” noted Kathryn Brosseau, “we are here to witness first-hand the pride, success and camaraderie of the Métis people here tonight. This evening would not be possible without the support and hard work of everyone involved – the founders, the donors whose contributions to our endowment fund help to financially support the recipients’ need to pursue post-secondary education and fulfil their dreams of a successful life. This year we are able to support about 171 students with approximately $660,000.”

She went on to thank organizer and communications manager Theresa Majeran and the many volunteers that help to make the annual event special every year and the BBMA Panel Members “who volunteer countless hours to review all of the student applications and manage all of the tasks that support our BBMA.” 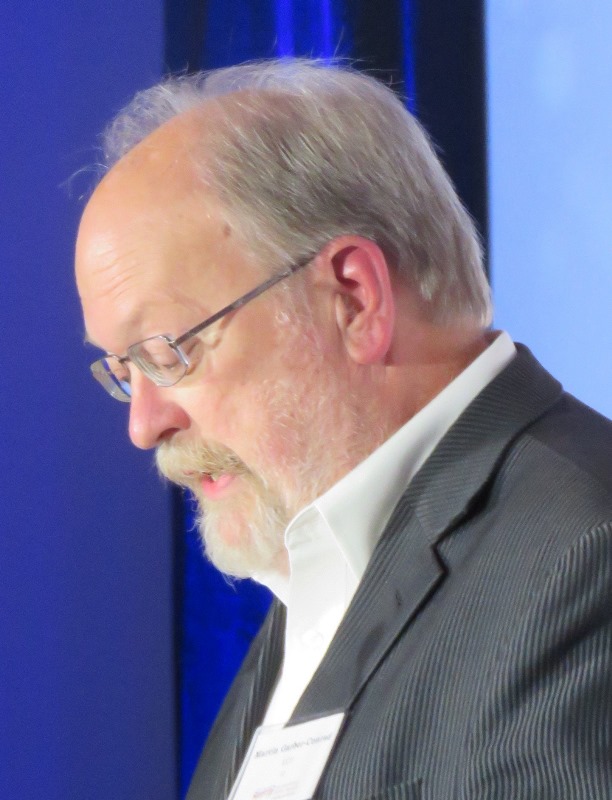 Martin Garber-Conrad spoke about Indian residential schools (IRS), reconciliation and the ongoing trauma suffered by all Indigenous people, including those who apply for post-secondary funding via the BBMA awards program. He noted that the residential schools that housed more than 150,000 First Nations, Métis and Inuit children for more than 150 years, “has left a legacy of injured generational trauma at a personal and community level and has had profound negative effects on the relationship between Indigenous peoples and other Canadians.”

Garber-Conrad also spoke about the loss of family, identity and hope, but noted that “applicants also write about people in their family and community who have inspired them. They write about their drive to learn about their culture; they write about achieving their educational goals and of their dreams for the future and about becoming role models for themselves and other young Métis people.

“The numbers of students assisted by the BBMA and the dollars awarded are indeed impressive but the real power of BBMA is the change in individuals – their pride, their opportunities, and their connection to their culture. In the era of the IRS, education was a tool for cultural assimilation but in the BBMA era education helps to create opportunities for cultural recovery, reclaiming pride and for personal, community and economic development.” 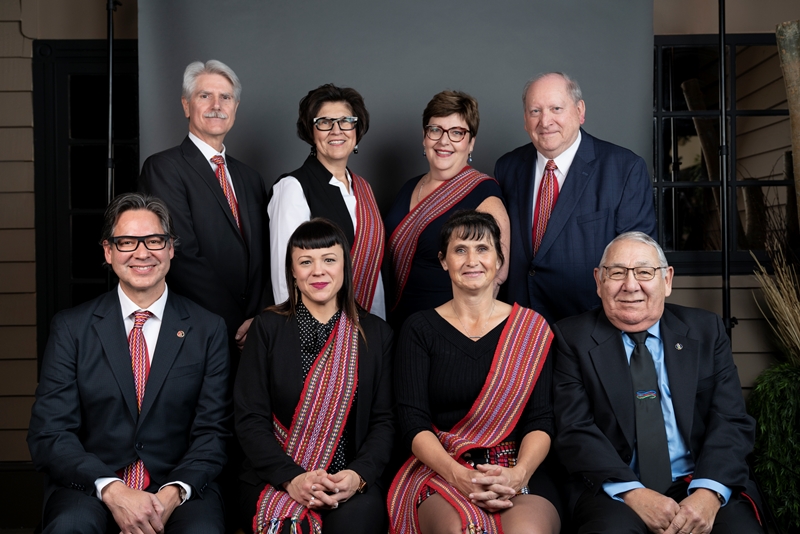 Before the Sash recipients were called to the stage, BBMA Sham Thorne spoke to gathering about the Métis sash, its shape, uses and colour structure and how it came into being. She was followed by BBMA alumni, James Henry, a student at Law who attended the University of Victoria and who offered some good advice to awards recipients about to enter their post-secondary studies. Both of these BBMA Alumni educated the audience, offered some great advice and had the crowd roaring in laughter with personal anecdotes and stories of their educational pursuits.

Following an outstanding dinner buffet provided by the kitchen staff and management at the Edmonton Inn on Kingsway Avenue, co-emcee Christie Ladouceur spoke about the BBMA and its founding partners and then introduced a five minute video entitled: “The Founder’s Vision for the Future.”

BBMA Continuing Student, Ramsey Mudryk is enrolled at the Emergency Services Academy where he is going to be studying to become a Primary Care Paramedic, a career field that he decided to pursue when he was a volunteer at the Elk Point Fire Department and saw, noted Keating, “the incredible work being done by RCMP officers as they went about their typical heroic duties.” 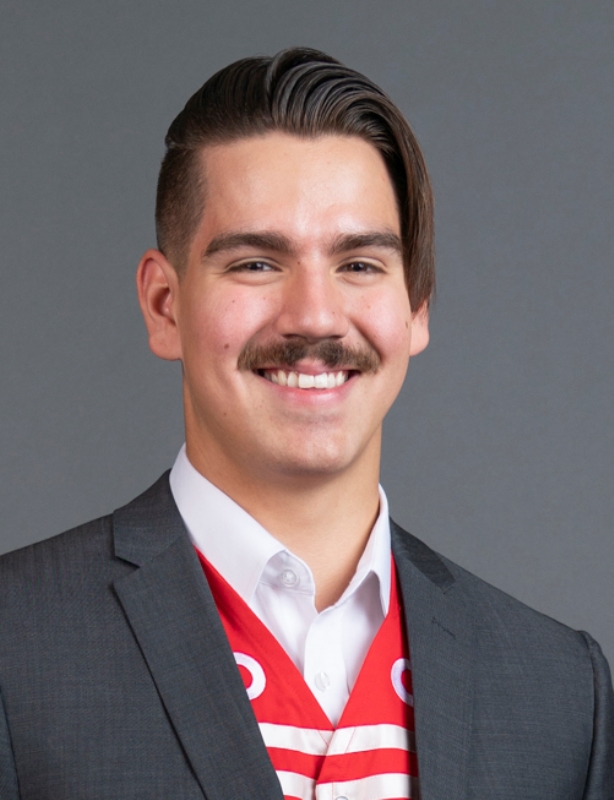 Mudryk, determined to become a leader in his community, spoke to the audience, noting that, “I come from Elk Point, a small community in Alberta that is also the home of MNA President Audrey Poitras. Growing up I had little knowledge of my Métis heritage and little exposure to my Métis culture. My family, like many others, chose not to fully embrace their Métis heritage just to avoid persecution and discrimination from other groups of people. Over the years, however, all of my family members have continued to restore the roots of our heritage. It is a difficult process when starting from scratch so I didn’t really have the chance to embrace my heritage until I was in junior high school. Because the social studies programs didn’t get into much Indigenous culture, I had to take learning into my own hands.

“Today, my Métis heritage has become an integral part of my identity. I continue to learn more about my culture and what it means to be Métis. I think that what has allowed our nation to continue to grow is our sense of community and our willingness to help one another reach for and achieve our goals and ambitions.

“My dream is to improve emergency services on Métis settlements and in First Nations communities, including fire rescue and emergency medical services. To achieve my goals I need to work hard and be able to afford my education – thanks to the BBMA I have become able to break through that final barrier. In the short term this award allows me to pay the tuition fees; in the long run this financial help will be an investment in this community and that is what really matters, because this investment helps to strengthen the Métis community as a whole.” 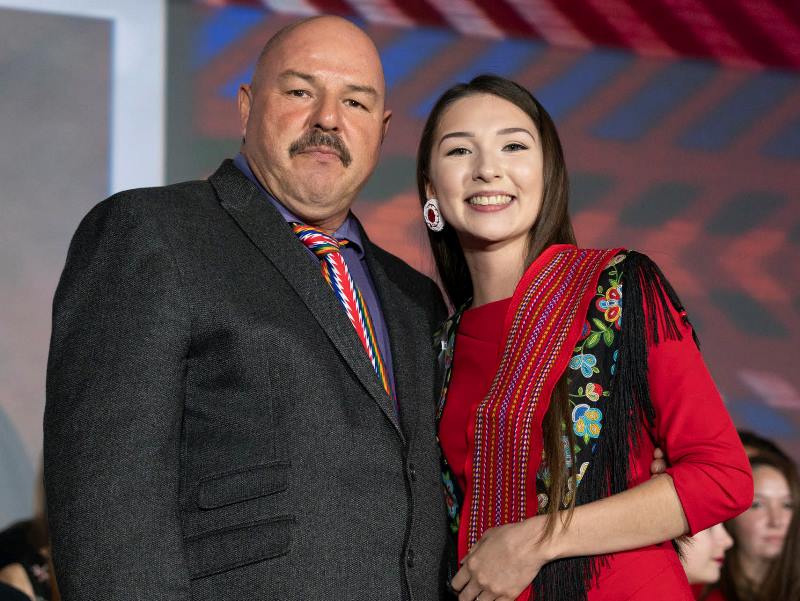 First year award recipient, Taneiya Mahe comes from St. Vincent, Alberta. She is currently studying education at the University of Alberta; her goal is to become an elementary school teacher.

“The Belcourt Brosseau Metis Awards,” assured Mahe, as she addressed the gathering from the podium, “has opened many doors to my future and has expanded the availability for my dreams to come true. I’ve wanted to be a teacher from my earliest years and that’s what I would tell anyone that asked.”

As one of several adopted children in her family, Mahe received a rousing applause when she thanked her mom, noting: “I will be forever grateful to my mom for raising us as her own and building and guiding us on a pathway toward success. As an adopted family of Métis and First Nation children our connection as siblings was strong; we came from the same backgrounds and we had all had similar hardships. This made the transition into my forever home much easier; we all shared and experienced successful lives thanks to our mother’s teachings. She taught us how to grow a garden, pick berries, and cook a wholesome meal and many more things. We had happy times and we had hard times just like any family. Sadly, most children’s experiences in the foster care system are not as fortunate as mine.” 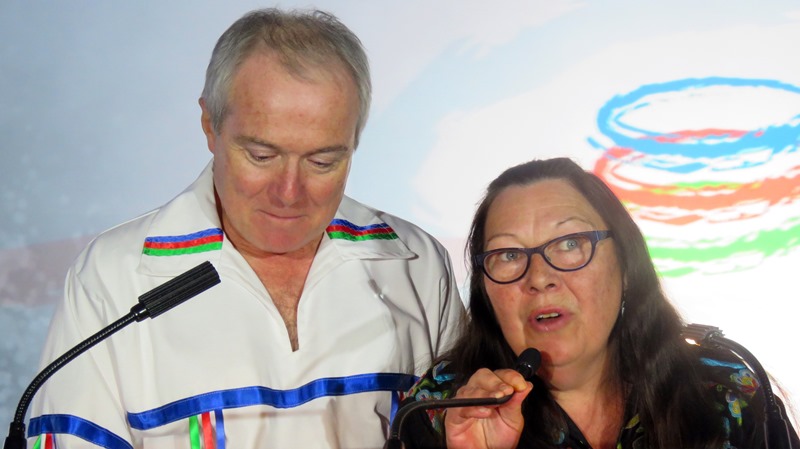 She spoke about the residential schools and the 60s Scoop and how these and other programs “intentionally damaged the lives of Indigenous peoples in so many ways. I want to use my mother’s influence to pursue my dreams in supporting the youth in our society and to be a role model for them. I want to use my personal experiences to help others heal and grow from their own (experiences). This dream of mine has become a possibility through this award and for that I would like to thank the founders and the panel members for choosing me as a recipient of this award.”

The Belcourt Brosseau Métis Awards initiative began in 2001 with a $13 million donation from Métis entrepreneurs and philanthropists Georges Brosseau Q.C., Orval Belcourt and Dr. Herb Belcourt. The trio founded the awards program to support the educational dreams of Métis youth and mature students in Alberta. Since its inception nearly 1,800 awards have been provided to help Métis people achieve an opportunity to complete their varied educational goals. 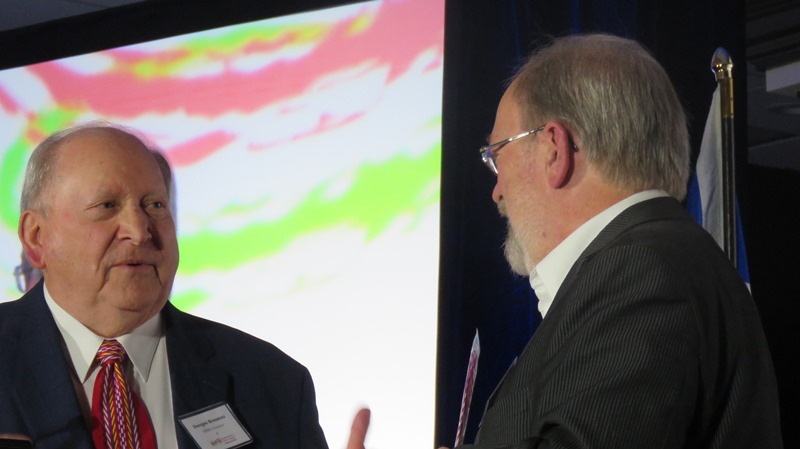 The appreciative crowd applauded in appreciation of the jokes and banter shared by BBMA co-founder Georges Brosseau and ECF CEO Martin Garber-Conrad.

The Edmonton Community Foundation (ECF) has been a partner with the BBMA since the very beginning of the endowment – about a decade after the Foundation began working to create and maintain a strong, vibrant community by acting as a bridge between donors’ wishes and the needs of charities in the greater Edmonton area. BBMA co-founder Georges Brosseau Q.C. spoke about the endowment fund and what it means to Métis Albertans.

“In order to uplift our people so they can succeed in the world and in our community they need to be educated,” he said. “Education is the key to success and therefore we are pushing as hard as we can to get as many awards as we can each year. Over the years we have given out more than 1,800 awards for a total disbursement of $7.2 million.

Sarah Wolfe sang the Metis and the Canadian anthems.

“The key thing with the awards program is that we base the awards on the choice of career that the individual wants to go into. We asked them what they want and what they wish to pursue and then we asked how we can help.”

To qualify for educational awards, applicants needs to justify their choice of educational pursuit and meet the overall requirements of the program.

“We started out with about $13 million and through investments, (and thanks to the Edmonton Community Foundation’s investment) we now have about 19.7 million in the endowment fund. This is very positive news and one that ensures that our Métis people will continue to have the opportunity to go to school and to have a successful life.”

The amount of the individual awards is based on a sliding scale.

“Awards can be as little as $1,000 and as high as $10,000 or more,” explained Brosseau. “Recipients are selected on an individual basis; awards are not based on marks alone. We look at the overall individual and anyone can qualify, providing they meet the criteria of the Awards Panel, which is made up by Métis people. Sometimes an individual is selected because we see that he or she has struggled through difficult times, but remains dedicated to achieving both an education and a successful life. People aren’t refused because they don’t have high marks; we base our decisions on the whole person and are very cognizant that they sometimes don’t have opportunities. We try to provide the opportunity that many of our young students need – what they do with it will determine their future.”

And for most, those futures look bright and beautiful.

“It’s an amazing event once again this year,” noted BBMA co-founder Orval Belcourt. “We are so very proud of the many young people who are here today to receive their Metis Sash and the recognition they deserve for their dedication to education and for their hard work and achievements. Our young people are becoming better educated as a result of the awards program and their continued success is proof that a little support can go a long way. Congratulations to the many young Métis awards’ recipients here today and to those who, over the years, have already gone on to achieve their goals.”

BBMA recipients receive their Métis Sashes with pride and joy