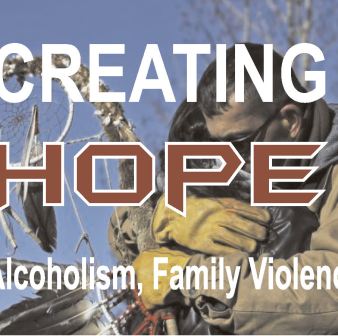 On March 7 the Creating Hope Society of Alberta (COHA) hosted a one day forum to address the topics of alcoholism, family violence and child welfare.

“The forum, entitled Hope 2 Cope,” explained COHA Program Manager, Crystal Beaverbones, “was designed to provide awareness, prevention and education for the purpose of reducing the harms associated with alcohol consumption and family violence. This initiative was funded through Alberta Health Services and attended by several hundred participants, many of whom had questions, suggestions and new ideas about the best ways to deal with these problems that continue to plague our communities. The forum heard from a variety of interesting and informative speakers, including a keynote address from former mayor Jan Reimer, a round table hosted by Beverly Allard and remarks from our panel hosts, Sue Languedec (Aboriginal Consulting Services), Freida Peacock (Edmonton and Area Child and Family Services), Dr. Josie Auger (Director of Iyinayiniwiwin: Place of Learning LTD) and Dr. Jean Lafrance (Faculty of Social Work at the University of Calgary).”

The day got underway with a 7 a.m. Pipe Ceremony led by Vince Steinhauer, who spoke later in the day on a topic entitled: Impacts of Colonization. Creating Hope Society Executive Director and forum emcee Bernadette Iahtail took to the podium with welcoming  comments following forum registration and a continental breakfast. The Grand Entry included Eagle Staff carrier Elder Gilman Cardinal, City of Edmonton Councillor Andrew Hack and Treaty 6 Grand Chief Cameron Alexis, who is also the AFN Regional Chief and holder of the Justice Portfolio.

Greetings and comments from the Chiefs, city councillor, MLA Steve Young and Stephen Gauk, the Acting Assistant Deputy Minister of the Aboriginal Strategy Division, were followed by a keynote address from Jan Reimer. Edmonton’s first female mayor (1989-1995) and now the Executive Director of the Alberta Council of Women’s Shelters (CAWS), Reimer spoke about the inefficiencies created by insufficient funding, noting that Alberta has the highest number of Aboriginal women, a shocking 54 percent, who have reported being victims of violence threatened by gun and/or knives, choking, and sexual assault. She also told the gathering that in 2004 a general social survey indicated that Aboriginal women were more than three times likely to be victims of violence than non-Aboriginal women, a tend that continues into 2014.

“Every child who finds him or her self caught up in this situation bears the brunt of pain; every child suffers,” she added. “We need to find a way to stop this ongoing cycle of child welfare.”

Funding continues to be a key factor; there just aren’t enough programs or resources to combat what lies at the foot of most addictions and family violence issues, years of intergenerational trauma brought on by poverty, marginalization, racism and Indian Residential Schools.

Federal funding for on-reserve shelters, which have never been equitable in comparison with off-reserve shelters, has been frozen for more than five years. A round dance initiated by ACWS last December to protest and bring awareness to the general public about the funding shortfalls and the blatant discrimination by the federal government’s refusal to live up to its commitment to ensure that sufficient funding would be made available to help care for women and children who find themselves victim of violence and no longer able to live in their home environments.

Christie Lavan, the Communications and Partnerships Advisor to the Alberta Council of Women’s Shelters (ACWS), noted at that time: “It’s discrimination essentially, especially when you consider that Aboriginal women experience domestic violence at higher levels than other cultural groups and are statistically more likely to have that abuse escalate to murder. AANDC (Aboriginal Affairs and Northern Development Canada) is not hearing us.”

The feds still haven’t opened their ears or their coffers to help alleviate and repair a system that has been broken for far too long.

The Creating Hope 2 Cope Forum heard from an array of speakers, each of whom talked about how non-Aboriginal agencies deal with children and family violence issues. All agreed that in order to succeed, holistic healing strategies would provide a much higher chance of creating positive results. Dr. Jean Lafrance spoke at length on the subject. His experience includes  more than 33 years as a frontline social worker, casework supervisor, regional administrator, staff developer, program director, assistant deputy minister and finally as Children’s Advocate with Alberta Children’s Services. His current research projects include the “Making our Hearts Sing” initiative, which has created a partnership with the Blood Tribe, the Sturgeon Lake First Nation and the Métis community to develop more culturally appropriate modes of service delivery in child welfare programs.

“Dr. Lafrance spoke at length on the need for a different approach when it comes to dealing with child welfare and domestic violence issues,” noted Beaverbones. “He was just one of many speakers to address holistic healing strategies; there needs to be more Aboriginal input and involvement if we are to see positive change in the child welfare system.”

Beaverbones, noting that “alcohol, drugs and domestic violence are the root causes of family breakdown, an endemic in our communities and a real threat,” said the objective of the March 7 forum “was to utilize Aboriginal holistic approaches/ methods to reduce alcohol and family violence.”

Aboriginal guest speakers included Vince Steinhauer President of Blue Quills whom spoke about the roots of colonization and the devastating impacts to Aboriginal peoples.

“It has been in Creating Hope Society’s experience that those supporting Aboriginal families often don’t use cultural sensitive models or approaches,” explained Beaverbones. “Research has confirmed that using Aboriginal service delivery models has been effective for Aboriginal peoples in reducing social issues. All people benefit from a sense of belonging to their families, culture and communities. It is especially important in the case of parents caring for young children. Parents need to feel supported by family, friends, the community and service providers. Aboriginal people through a long history of assimilation and discrimination may not have this sense of belonging. This may impact their health and sense of worth and may result in feelings of despair and homelessness, which further compounds the high rates of social issues such as alcohol misuse, domestic violence, poverty which all result in family breakdown.”