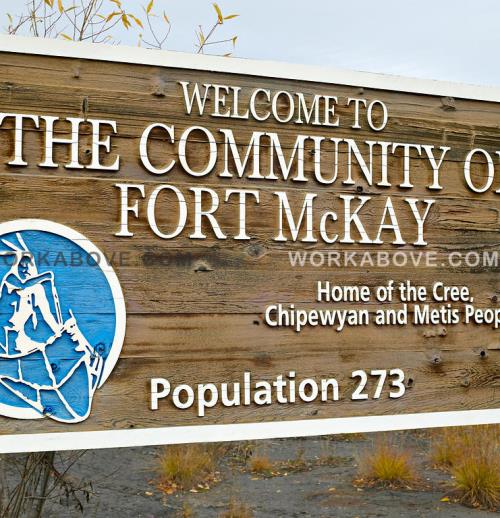 (AER) – Flying towards Fort McKay over the dense mass of trees, your eye can’t help but follow the curving Athabasca River and dart around complex oil sands operations before getting caught on something unexpected: homes.

About 800 members of Fort McKay First Nation (FMFN) and over 500 members of the Fort McKay Métis call this northeastern region of Alberta home, and have for almost 200 years.

For years, the people of FMFN and Fort McKay Métis worried about how air emissions from oil sands operations and the odours they cause are affecting their health and the environment. They’ve also questioned the adequacy of the air monitoring systems in place and whether the province’s rules and regulations are enough to keep them safe.

“Imagine waking up many mornings and being subjected to air that stinks and wondering how that air is affecting your loved ones,” says Chief Jim Boucher of the Fort McKay First Nation.

“We are literally surrounded by enormous industrial facilities and significant land disturbance, and the community is frustrated that they still do not have answers about how cumulative effects are affecting them and their environment.”

In response to these concerns, the Alberta Energy Regulator (AER), Alberta Health, and FMFN joined forces to conduct a year-long study examining these complaints. The results were released in a September 2016 report with 17 recommendations to improve air quality and air monitoring systems in the community.

“The Fort McKay community has repeatedly raised concerns to the AER and to government that air quality and odours are impacting their everyday lives,” says Chris Severson-Baker, acting director of the AER’s Environmental Sciences Branch and advisory committee co-chair.

“We realized that in order to improve these conditions, we all needed to come to the table to accurately diagnose the problem and develop enduring solutions together.”

Fort McKay Metis President Ron Quintal says that the work to date has been moving in the right direction so far. However, he expects that operators and government will make every effort to improve air quality in the region.

“Industry and government need to go beyond the minimal requirements, especially when they operate right at our backyard,” says Quintal.

“We are humans, just as anyone living in an urban city, and we won’t tolerate the level of air and odour concerns we’re forced to live with every day.”

In the 12 months since the report was released, two recommendations have been fully implemented and another eight are underway. The most notable of these include a new air monitoring station called the Waskōw ohci Pimâtisiwin station, which was named by a member of the Fort McKay community and means “air of life.” The air monitoring station detects acute concentrations of sulphur dioxide and hydrogen sulfide—potentially harmful gasses that are found at oil sands upgraders—and warns residents when air quality is impacted and an emergency response may be required. The air monitoring station has been installed, and work to identify thresholds for additional air pollutants that might have an acute health impact is in progress.

Another recommendation that is in progress is the creation of an odour response protocol for oil sands operations. This protocol, to be tested this fall, will help ensure a more timely response to odour complaints, provide better communication to the community and more transparency about the actions taken to address complaints, and help identify the source of emissions.

“When you look closely at an issue, you find that there are many things to consider and many possible solutions,” says Merry Turtiak, director of Environmental Public Health Science at Alberta Health and advisory committee co-chair.

“To pick the right solution may involve some trial and error, and it’s possible we may not get it right the first time. A key challenge will be to test solutions with all partners in a timely way, make sure everyone agrees on the best approach, and then monitor its implementation to make sure we are reaching the goal in mind.”

When asked about the biggest challenge facing the committee, Severson-Baker says it’s figuring out what is causing the odours and what is contributing to elevated levels of certain air pollutants in the community.

“There isn’t just one source causing air quality and odour events in Fort McKay. We first need to understand which sources are the most important contributors and understand under what conditions they occur—whether it’s related to the weather or specific plant-site operation activities—and once we have that information, we can come up with a plan to reduce odours,” says Severson-Baker.

More to be Done

While much effort has gone into creating real solutions from the recommendations, it’s too early to say when the air in Fort McKay will improve. There is still a lot of work to be done, questions that need to be answered, and challenges that lie ahead.

“While we are encouraged by the effort put into the study and into the formation of the 17 recommendations, it is far too early to talk about success,” says Chief Boucher. “Ultimately, we must see improvements in air quality and in the way companies operate to better control emissions.”

Monica Hermary is a contributing writer at the Alberta Energy Regulator (aer.ca)

Be the first to comment on "Clearing the air: Partners take steps to improve air quality in Fort McKay"