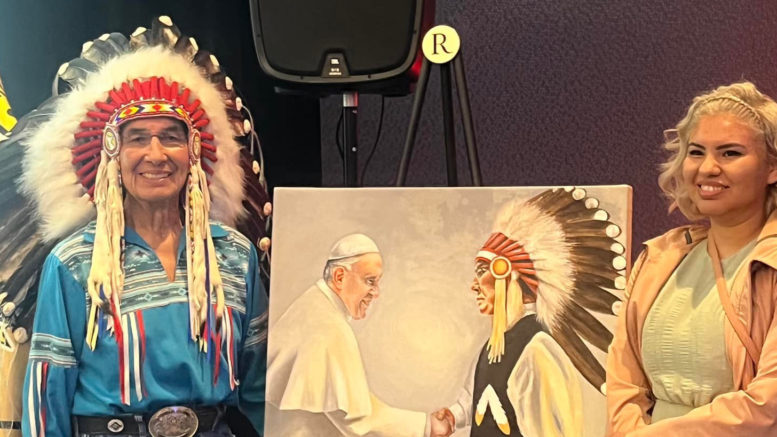 (ANNews) – The Vatican has formally announced that Pope Francis will travel to Canada from July 24-29, 2022. The Holy Father will arrive in Alberta on July 24 and spend time in Edmonton, before traveling to the Ermineskin Cree Nation, and then to Lac Ste. Anne.

His Edmonton stop will include a brief ceremony at the airport, and a service on July 25 at the Sacred Heart Church of the First Peoples in downtown Edmonton. At the Ermineskin Cree Nation, he will visit the site of the former Residential School of the four nations of Maskwacis (Ermineskin, Samson, Montana and Louis Bull). In Lac Ste. Anne he will visit the Lac Ste. Anne pilgrimage. Other stops in Canada include Quebec and Nunavut.

Chief Wilton Littlechild has been one of the central figures in securing the Pope’s visit and ensuring that the relationship between Rome, and Canada’s Indigenous Nations is one of growth, community healing of Indigenous peoples, and reconciliation. He is a member of the Ermineskin Cree Nation and a former Grand Chief of Treaty 6 Nations. He is also a Residential School Survivor and was part of the Indigenous delegation that travelled to Rome and met with the Pope earlier this spring.

It will be important to hear Pope Francis in person give an apology to the survivors, families, communities, and Indigenous Nations who were and continue to be impacted by Canada’s Indian Residential Schools, said Chief Littlechild.

“After hearing all the testimonies of our people wanting an apology from His Holiness, Pope Francis, in Rome, now he will come to Canada [in July] and apologize to them directly.

“It will undoubtedly mean a lot to us and of course, I continue to pray that he will have that opportunity to extend to the survivors and those who were abused. To hear him say in person – I am sorry.”

Maskwacis will be one of the main stops during the Pope’s visit to Canada; it will be at a former Residential School and survivors will be present.

In a statement, the Maskwacis Tribal Council emphasized the importance of the visit.

“This is a pivotal moment for the world to witness and understand the impacts of the intergenerational traumas suffered by Indigenous people in residential school systems in Canada and around the world,” they said. “This is an important step toward reconciliation for everyone to be a part of.”

Chief Littlechild has been among the survivors who have been advocating for this for a long time.

“The journey that I call ‘a long road to Rome’ was a several-year effort on my part,” he said.

In total, Chief Littlechild visited Rome five times. During the fourth visit, he advocated on behalf of Canada’s Indigenous Nations.

He said, “I specifically asked him to come here to Canada to apologize to the survivors for all of the abuse that they suffered.”

He asked if the Holy Father could say these words: “I am sorry.”

In April 2022, in Rome, Pope Francis expressed an apology during a visit by First Nation, Inuit and Metis delegations. He acknowledged the harm done by residential schools in Canada, marking a crucial step for the church by admitting its role in the abuse of Indigenous communities and children.

“He expressed to us in Rome, I am very sorry,” said Chief Littlechild, noting that they were grateful that His Holiness gave an apology in Rome.

At an event last month, Chief Littlechild asked that we, as Indigenous people welcome his Holy Father to Canada and Indigenous country. He asked that we allow the survivors to have their moment with the Pope.

He said it’d been years in the making for this moment. The apology is long overdue, and so many people have been involved in making it possible.

He also stressed that the Holy Father is making the trip despite his heath. It’s a massive honour for Canada’s Indigenous people that he is making this part of his mission, and we need to be respectful of that, said Chief Littlechild.

“Because of his health, he can only actually go to three cities.” He said that when he was younger, he would go to more places and see more people, but unfortunately it won’t be possible to visit more than three cities.

It’s because of his health, said Chief Littlechild, and “we want to respect his health.

“In the short time that he’ll be here – it’ll be for all of Turtle Island. It’s very rare that he has come to northern Canada twice, but he has never come for the Indigenous peoples in Canada.”

Chief Littlechild said this visit is also significant to his Holy Father. He gave First Nations, Metis, and Inuit delegations more time than any other group in the history of Rome.

And he plans to bless the Indigenous people of Canada in much the same way as he did in Rome.

“He will give us just as much time when he’s here. I think it’s a very… very special blessing.”

For Wilton Littlechild and many others, this moment is a long time coming, and it will help with their healing journeys.

The dates are also very special for Chief Littlechild; they align with his birthday – so it will be a double and much-deserved blessing, indeed.