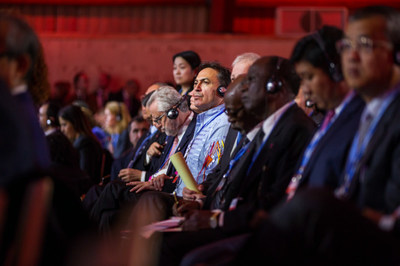 (CNW) – On November 4, in a ceremony held at Canada’s Centre for Geography and Exploration, headquarters of the Royal Canadian Geographical Society, Chief Perry Bellegarde was announced as the new Honorary President of the Society.

“There have only been seven Honorary Presidents in the history of the Society,” said John Geiger, Chief Executive Officer of the Royal Canadian Geographical Society. “It is an honour reserved for the eminent individuals who have rendered outstanding service to their country and to the Society. Perry Bellegarde has dedicated his life to championing the rights and well-being of First Nations in Canada and around the world, and we are very proud that he has accepted this role.”

Over the past 35 years, Bellegarde has held a number of leadership roles, including two terms as the National Chief of the Assembly of First Nations (2014 to 2021). A strong voice for inherent and Treaty rights, Bellegarde believes Indigenous knowledge and values are crucial to building a more just and inclusive society. Bellegarde’s appointment to the Society’s top honorary position is a further acknowledgement of the long relationship and strong ties between Chief Bellegarde and the Society.

“For too many years, the stories of our people have not been given the honour they deserve on our own lands,” said Chief Wilson Bearhead, former Chief of Paul First Nation, Grand Chief of the Confederacy of Treaty 6 First Nations (Alberta) and Assembly of First Nations Alberta Regional Chief. “Given their mission to ‘make Canada better known to Canadians and to the world’ the Royal Canadian Geographical Society could not have chosen a more appropriate and relevant Honorary President than Chief Perry Bellegarde. Deeply grounded in community, ceremony and our original systems of lands, language and governance, Chief Bellegarde is the ideal leader to guide the RCGS on a renewed path of relationship, reciprocity and respect.”

Chief Bellegarde has dedicated his life to serving and leading his people, to Nation building and to defending the rights of First Nations. Bellegarde recently played a critical role in the overwhelming success of the Indigenous Peoples Atlas of Canada, published by the Society in 2018. In recognition of his work, Bellegarde was awarded the Society’s Gold Medal.

“Perry Bellegarde is a leader who continuously conducts himself in a diplomatic manner,” said former Viceregal consort of Canada, RCGS Fellow and President and Chair of the Hnatyshyn Foundation, Gerda Hnatyshyn. “As a Fellow and Gold Medal recipient of the RCGS, I know he will represent the organization’s mission extremely well in the role of Honorary President. In doing so he will enhance the efforts of reconciliation.”

The title of Honorary President has seldom been granted since the Society was founded in 1929. The title is conferred upon exceptional individuals who embody the ideals of the Society: in the case of Chief Bellegarde a leader who exemplifies commitment to caring for the natural environment and peoples of these lands.

“We welcome Perry Bellegarde as the Honorary President of the Royal Canadian Geographical Society,” said Wade Davis, the Society’s Honorary Vice-President. “I cannot think of a better individual to join us at this honorary rank. Perry has done so much for the First Nations of our land and for all of us in the wake of an ongoing process of reconciliation from which we’ll become a better country.”

“I congratulate Perry Bellegarde on this well-deserved honour and I commend the Royal Canadian Geographical Society on choosing such a worthy individual for this honorary position,” said Saskatchewan Lieutenant Governor Russ Mirasty. “Chief Bellegarde’s leadership at the local, regional, provincial and national level has given him a unique perspective and first-hand knowledge of Canada’s diverse peoples and lands. His commitment to bringing people together in the spirit of reconciliation and collaboration will serve the RCGS well, indeed.”

Past Honorary Presidents include explorer Joseph Burr Tyrell and former Governor General Vincent Massey. Most recently, the late Alex Trebek nobly served as the Society’s Honorary President from May 2016 until his death last year.

ABOUT THE ROYAL CANADIAN GEOGRAPHICAL SOCIETY

Publisher of Canadian Geographic, the RCGS is dedicated to imparting a broader knowledge and deeper appreciation of Canada — its people and places, its natural and cultural heritage and its environmental, social and economic opportunities. The Society is one of Canada’s largest non-profit educational organizations, comprising more than 25,000 members from across the country. The RCGS is funded primarily by membership fees and donations. The Society’s board of governors and its program committees are composed entirely of volunteers.