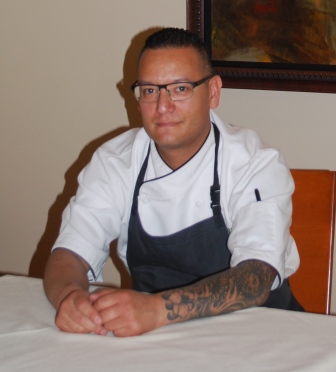 A well-known Edmonton chef is on the way up to making his mark in the industry on a Canada-wide scale. For Shane Chartrand, the road to getting there was far from smooth. In fact that journey was filled with adversity, which is fairly typical for the average First Nation person.

Now, an award-winning local celebrity chef whose image has been seen on print, TV and live media, Chartrand is the executive chef for Sage restaurant and the River Cree Resort & Casino.

Originally from Enoch Cree Nation, Chartrand was placed into foster care at age two and floated through the system until his adoptive family took him home when he was seven.

Fortunately, it was a Métis family and Shane’s new father made a point of educating him about the significance of being Indigenous. 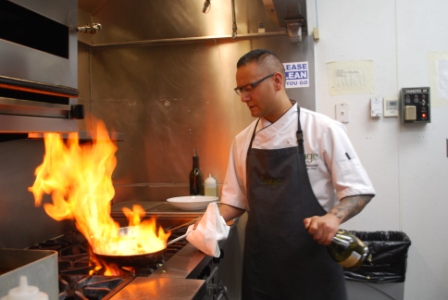 Growing up he said he wasn’t fully familiar with what it meant to be First Nation having been raised in rural Alberta on a hobby farm. But, it was where he experienced  his first raw experiences with food and his interest in Aboriginal cuisine was sparked. A father/son survival trip that saw them spend three weeks in the mountains learning how to salvage, hunt and prepare food from the bounties of nature proved to have a big impact on his life.

Chartrand’s interpretation of Aboriginal  food is anything that is derived from the   land, locally. “Spending time as a kid  hunting with my dad, we ate wild moose  and grouse all the time.” he noted. “So,  my life envelopes what Aboriginal food is; you’ve hunted  it, you’ve killed it, you’ve brought it up and then it’s blessed.”

His journey to the culinary world started at age 14 when he would ride his bicycle to a nearby highway restaurant to work as a dishwasher in what he fondly described as a “dive.” Two years later he worked his way up to become a cook and decided at age 17 that his ultimate goal was to become a chef. Graduating from NAIT in his early 20s Chartrand was already running franchise restaurants, but he realized that he wanted to reach higher.

“I knew that I wanted to be an artist and express my talents through cooking.”

It took some humility to start again from the ground up and to learn and experience what was needed to become a culinary artist, but Shane was determined to find his niche and it didn’t take long for him to make his mark.

He honed his skills at all the major local fine dining spots such as Hotel McDonald, Sutton Place Hotel, Union Bank Inn and Dante’s Bistro. 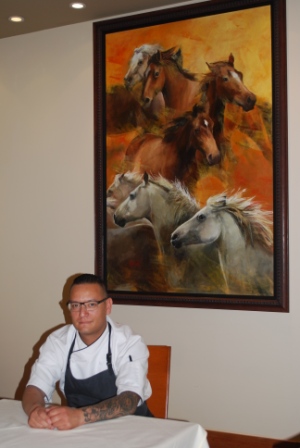 Chef Shane Chartrand has cooked for many celebrities but his finest memories are from the charity work he has done.

While on the move up his heart strings started to tug and he developed a desire to give back to his community. For Chartrand, his work with Kids with Cancer, the Make a Wish Foundation and the Canadian National Institute for the Blind have been some of the most cherished moments of his career and more important than cooking for countless A-list celebrities such as Keith Urban and Gordon Ramsey.

“Meeting with stars was amazing, but not as exciting as helping people out,”  explained Shane.

In addition, he regularly gives pep talks and advice at local schools to  encourage children to consider a career in culinary.

He initially helped to open the River Cree Casino and was there during the  construction phase, however three years later an opportunity arose to work for  the Ghermezian family. Being the personal chef for the owners of one of the  world’s biggest establishments at West Edmonton Mall was also a big highlight  where he performed countless VIP dinner events and specialized in creating  kosher dishes.

He eventually found his way back to the River Cree and to his roots in his adjacent home community of Enoch.

Chartrand had always grappled with a sense of identity and how to relate between the two worlds of Native and non-Native. After finding out about the tragic fate of his biological parents and grandparent he struggled to cope with the loss and with discovering who he was.

Feeling confused, he said he felt like he didn’t fully fit in on either side of the cultural spectrum. That identity crisis was something he’s worked hard to overcome, including attending powwows, sweats, conducting research via literature and participating in other cultural activities.

Chartrand believes that his experience with two worlds has helped him become a better chef and that he has gained an understanding of what people are looking for by incorporating the two. One of his long-term goals is to bring Aboriginal cuisine to the forefront of Canadian culture and experience. With his creations he would like to blow the top off of the average food experience.

“I’m trying to get emotion, a thought, a feeling. Our menus aren’t written on ingredients, so for instance we don’t write a menu based on steak, scallops, chicken and dessert.  It would be based on feelings or emotions.”

He demonstrates his artistry by developing unique experiences that examine the human senses. For example, while envisioning what it would be like to sit by the sea, how a person would feel and what they would smell in the air, he created a dish called “Sea Shore.” By using unconventional ingredients made of black stones, boiled sea water that was made into seafood broth, filled up with scallops, pieces of smoked trout and caviar along with micro greens and sea beans, the final dish successfully mimicked the seashore.

“It might even sound like a facade, but it’s literally how we write VIP dinners and create them for people who come in to experience these types of things,” said Chartrand.

Actively working to incorporate more indigenous features on the Sage current menu, he says it will take some time but ultimately he would like to see a live, Aboriginal progressive menu.

Shane possesses a natural competitive spirit and he stays on top of his game by regularly competing across the country. In 2011 he placed first in the Chef of the Year, Canadian Culinary Federation, Provincial competition.

There are currently four apprentices under his guidance, two of which are Aboriginal youth. Although the two are thriving in their endeavours he said it takes hard work, professionalism and dedication.  To those considering getting into the field he said it all starts with showing up, having a no excuse attitude and combating peer pressure.

“You have to be willing to work hard and to forget everything around you,” advises Chartrand. “Don’t let your friends pull you into problems and you have to be able to say no.”

Shane strives to be a good example and a role model to the younger generation. “I think it’s the biggest thing I want to work on – to get more First Nations youth involved in it. I want to see young Aboriginals doing well and to see their happiness.”

To meet Shane and to experience his one-of-a-kind cuisine creations, head down to the Sage at the River Cree Resort & Casino, 300 E Lapotac Blvd, Enoch just to the west of Edmonton.