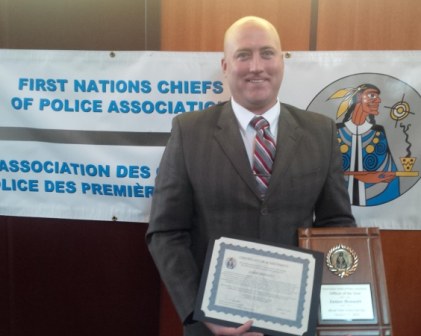 Sergeant James Bennett of the Blood Tribe Police Service was named as one of two recipients of the Police of the Year Award handed out by the First Nations Chiefs of Police Association (FNCPA) on October 21, 2014  in Gatineau, PQ.

This award is given to an officer who has shown his dedication to the department and has exemplified to be a team player as witnessed by his strong ability and willingness to assist others.

Upon presentation of the award Chief of Police Lee Boyd said, “Sergeant Bennett is a team leader and strong example for all BTPS members to look up to.  He continues to diligently serve the community as well.” 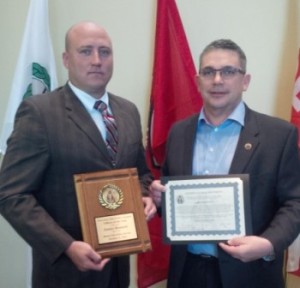 Sgt. James Bennett (L) is being presented the Officer of the Year Award by Chief Lee Boyd (R) of Blood Tribe Police Service at the FNCPA  AGM in Gatineau PQ .

Sergeant Bennett has been a member of the BTPS since 2009.  His community work includes involvement in the Kainai Headdress Society, Kainai Pow Wow, Army Cadets, the Special Olympics Torch Run and sits on the Pikanii Youth and Education Foundation Board.  He has been honored with presentation of a Headdress and a Blackfoot name.   He is the official teepee keeper of the police service. In his official capacity Sergeant Bennett is in charge of a Community Policing Shift and manages the conducted energy weapon program.

Most recently Sergeant Bennett spearheaded a program to provide food, clothing and hygienic products to the homeless population of the community.  Enough money and goods were collected to also provide every person released from police custody with a bottle of water, instant soup and a granola bar as well as making a donation to the local food bank and to purchase a new stove for the Moses Lake Homeless Shelter.