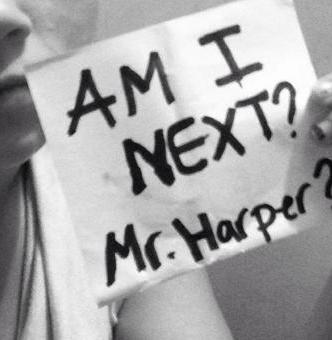 A social media campaign was launched to pressure the federal government into calling a National Inquiry into the epidemic of missing and murdered Aboriginal women in Canada.

Membertou, NS –  On October 22, 2014, leaders from National Aboriginal Organizations and Northwest Territories Premier Robert McLeod, along with Ministers and officials from Provinces and Territories met to prepare for a National Roundtable on murdered and missing Indigenous women.

This meeting was a tangible step forward on the Roundtable. All present agreed that the National Roundtable will take place in February 2015 to coincide with an upcoming meeting of the Aboriginal Affairs Working Group and recognized the urgency of this issue including the need to collectively move forward on solutions. The focal point of the roundtable is preventing and addressing violence including the most extreme cases that result in missing and murdered Indigenous women.

The Roundtable will bring together Indigenous leaders and representatives, Provincial and Territorial Ministers. Federal Ministers will formally be invited to the Roundtable.

This meeting builds on a commitment between Premiers and National Aboriginal leaders made in Charlottetown on August 27, 2014 to support convening a National Roundtable discussion with the federal government on the issue of missing and murdered Indigenous women.

“Creating safe, healthy and thriving communities is a priority for First Nations across Canada, and we are working to ensure concrete action to end violence against Indigenous women and girls,” said AFN Regional Chief Morley Googoo who participated in the National Aboriginal Women’s Roundtable (NAWS) this week as well as preparatory meetings for the National Roundtable. “Bringing all parties together to build on existing recommendations and to confirm action and implement solutions to address the root causes of why so many Indigenous women remain vulnerable is essential as we move forward.”

“NWAC is pleased that the issue of violence against Aboriginal women and girls is being recognized as an urgent matter that requires a collaborative approach involving the community, the provincial/territorial and federal governments. NWAC is committed to working towards the elimination of all forms of violence towards Aboriginal women and their girls,” said Native Women’s Association Vice-President Dr. Dawn Harvard.

“The Métis Nation is pleased with the progress made today by Aboriginal Leaders, Premier McLeod and provincial and territorial Ministers in moving forward in a formalized process which will lead to a national roundtable convened to address the critical issue of murdered and missing Aboriginal women and girls,” stated President Clément Chartier of the Métis National Council.

President of Women of the Métis Nation, Melanie Omeniho noted, “I am particularly pleased that this monumental step was taken on the final day of the NAWS IV gathering here in Membertou signifying a real and positive agreement by both Aboriginal and non-Aboriginal leaders to take a pro-active approach, taking into account the decisions of the gathering which I believe will help guide the deliberations which will be undertaken by the proposed round table.”

Congress of Aboriginal Peoples National Chief Betty Ann Lavallée explained, “We are committed to taking all action to support the safety of our women, children, men and boys. I commend the provinces and territories for standing with us and want to particularly thank Premier McLeod for his leadership. It is time for the federal government to join us and work together to prevent and end violence in all of its forms.”

Rebecca Kudloo, President of the Inuit Women’s Association of Canada, also representing at the meeting Terry Audla, President of Inuit Tapiriit Kanatami, said, “The outcome of today’s meeting is a very positive development in working together to end violence against Inuit women, girls and children. Violence is at crisis levels in many of our communities, which lack basic essential services that are taken for granted in most of Canada. We look forward to working with the provinces and territories, and hope that our federal partners will join us as well.”

Terry Audla, President of Inuit Tapiriit Kanatami, added, “Canada has to rise as one big community to tackle violence that is ruining so many lives and families and preventing us from building better future for our children across Inuit Nunangat. I thank and commend Pauktuutit for its dedicated work on these issues over the last 30 years.”

Premier Robert McLeod, from the Northwest Territories chaired this initial planning meeting and stated, “This was a very positive step and I am encouraged by the support of attending Ministers and Leaders. We all recognized the need to bring people together so we can focus on the action required and look forward to further engagement with National Aboriginal Organizations, and provincial, territorial, and federal Ministers.”