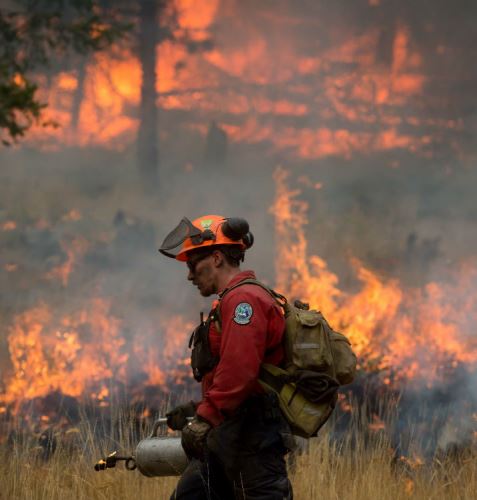 Coast Salish Traditional Territory/Vancouver:  BC First Nations leaders are calling on the federal and provincial governments to provide immediate and on-going supports needed by the numerous BC First Nations directly impacted by the 2018 BC Wildfire Season and to also create a BC First Nations Emergency Management Fund, which was proposed following the 2017 BC wildfire season.

Regional Chief Terry Teegee and Grand Chief Ed John met with Premier Horgan, and Defence Minister Sajjan on August 21, 2018 in Prince George to discuss ongoing efforts and situation affecting northern BC, and the rest of the province.

“Once again, BC finds itself under a State of Emergency due to the serious nature of the impacts from the more than 550 fires burning across the province. The crisis in wildfire management continues to emerge year after year and is a direct result of a number of factors including climate change, chronic underfunding for wildfire response, deficiencies in current and historical logging practices, and other mitigating factors. What we have learned over the past few years is that Canada must respond to this current climate change impact with mitigation and adaptation measures as called for in the Paris Climate Agreement, to which Canada is a signatory,” added Grand Chief Edward John of the First Nations Summit Political Executive.

“We can’t continue being held in “no man’s land” between the two levels of government while they try to decide who will contribute first and how much. This has created a frustrating situation for impacted communities. Given the past few wildfire seasons, there should have been better preparation for the 2018 wildfire season to ensure communities don’t have to battle this political and bureaucratic nightmare.  We must jointly take an assertive push to access the resources our communities need,” said Grand Chief Stewart Phillip, President of the Union of BC Indian Chiefs.

“First Nations in BC continue to be severely impacted by wildfires and we urgently request immediate and ongoing emergency management and financial supports to ensure safety, security and recovery within our communities. With BC’s First Nations spanning a spectrum of size, remoteness, governance and capacity there remains an urgent requirement to provide the necessary assistance and coordination for these First Nations communities to work with each other and to collaborate with local/regional governments and with federal and provincial agencies,” concluded Regional Chief Terry Teegee of the BC Assembly of First Nations.

During and following the 2017 BC Wildfire season BC First Nations leaders submitted a proposal (attached) to Canada entitled “A Proposal for a BC First Nations Emergency Management Fund to prepare for, prevent, respond to and recover from emergencies (2017). The proposal is based on the experiences of First Nations communities responding to the crisis arising from massive forest fires throughout the province of BC in the summer of 2017.  Many lessons were learned as First Nations were scrambling from the onset of the 2017 fire season to protect their members, homes, infrastructure and their communities.

Additionally, the BC Assembly of First Nations, First Nations Summit, and Union of BC Indians Chiefs have also sent letters to Prime Minister Trudeau and Premier Horgan urging Canada and BC to:

There have been many gaps in emergency and disaster responses to First Nations needs and these need to be identified and plans developed to rectify these gaps. BC First Nations leaders are also requesting a meeting to discuss these critical issues with Prime Minister Justin Trudeau, who will be in Prince George on August 23 to assess the devastating impacts of the 2018 BC Wildfire season.