(ANNews) – The stunning image on the cover of this month’s Alberta Native News at Cold Lake Air (1994) by the incomparable Alberta artist Alex Janvier.

It is part of a major retrospective, organized by the National Gallery of Canada, that spans the entirety of Alex Janvier’s 65-plus year career and is on exhibit at Calgary’s Glenbow Museum until September 9, 2018. The extraordinary exhibition is entitled Alex Janvier: Modern Indigenous Master. It features more than 150 artworks showing the evolution of Janvier’s unique vision. Rooted in the geo-cultural landscape of his northern Alberta home, Janvier’s works on paper, canvas and linen combine Dene iconography with Western abstract art styles and techniques.

“His paintings tell the story of his experiences, as a boy in residential school, through learning about art as a student, to the many years of working as a professional artist putting his work out there for all to see,” noted Greg Hill, Audain Senior Curator of Indigenous Art at the National Gallery of Canada.

According to Janvier, “My paintbrush is really my most powerful tool because it is available for my personal empowerment. Art has empowered me by allowing me the freedom to paint what I want, when I want. I truly enjoy creating art. My works can provide an opportunity to inspire others to come closer to the spirit of our Creator, Yedairye.” 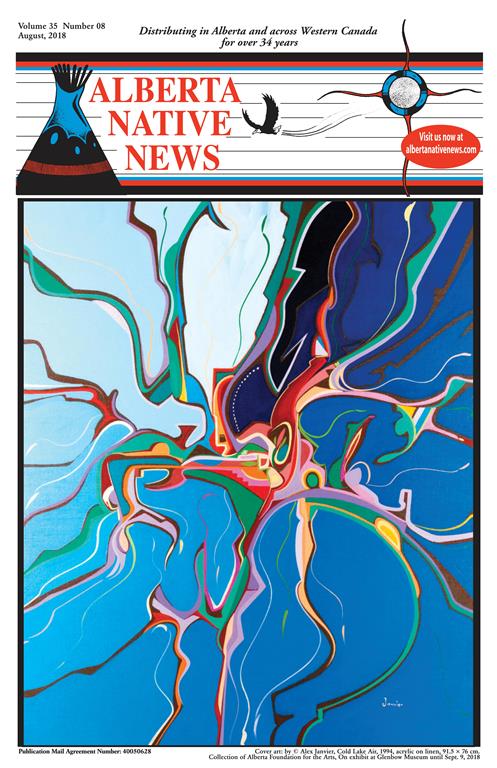 Born of Dene Suline and Saulteaux descent in 1935, Janvier was raised in the nurturing care of his family until the age of eight when he was uprooted from his home and sent to the Blue Quills Indian Residential School near St. Paul, Alberta. Although Janvier speaks of having a creative instinct from as far back as he can remember, it was at the residential school that he was given the tools to create his first paintings. Unlike many Indigenous artists of his time, Janvier received formal art training from the Alberta College of Art in Calgary and graduated with honours in 1960. Immediately after graduation, Janvier took up an opportunity to instruct art at the University of Alberta.

While Alex recognizes the artists Wassily Kandinsky (Russian) and Paul Klee (Swiss) as influences, his style is unique. Many of his masterpieces involve an eloquent blend of both abstract and representational images with bright, often symbolic colours. As a First Nations person emerging from a history of oppression and many struggles for cultural empowerment, Janvier paints both the challenges and celebrations that he has encountered in his lifetime. Alex proudly credits the beadwork and birch bark basketry of his mother and other relatives as influencing his art.

As a member of the commonly referred to “Indian Group of Seven,” Janvier is one of the significant pioneering Indigenous artists in Canada, and as such has influenced many generations of Indigenous artists. By virtue of his art, Janvier was selected to represent Canada in a Canadian/Chinese Cultural Exchange in 1985. Although he has completed several murals nationally, Janvier speaks of the 450-meter squared masterpiece entitled “Morning Star” at the Canadian Museum of Civilization, as a major highlight in his career. In January 2004, one of Janvier’s works was displayed in Paris, France at the Canadian Forum on Cultural Enterprise.

In recognition of his success, Alex Janvier has received many life time achievement awards and accolades; he was named a member of the Order of Canada in 2007 and a member of the Alberta Order of Excellence in 2018. His art appears in countless prestigious collections worldwide and he is highly regarded as a national treasure for both his art and his philanthropy.

Be the first to comment on "Feature artist for August 2018: Alex Janvier"