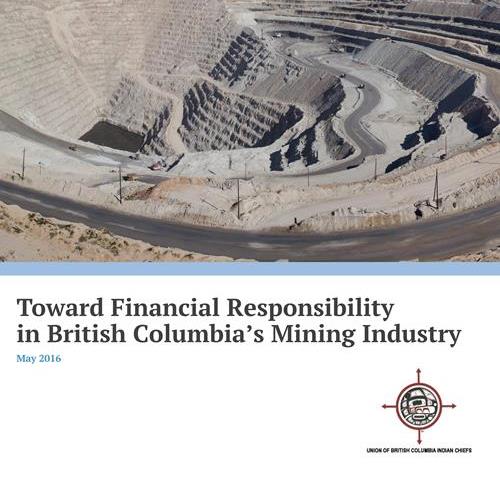 (Coast Salish Territory/Vancouver, B.C.) The B.C. government is enabling a dangerous disregard for environmental monitoring, reporting and protection among mining companies by letting them off the hook for the full costs of environmental reclamation – leaving taxpayers liable for more than $1.5 billion, a new report shows.

“Other industrial sectors treat accident insurance and security deposits as a routine and fundamental cost of doing business and if a warehouse catches fire, a pipeline bursts or a factory has to be shuttered, companies have money set aside to respond effectively and immediately,” said Grand Chief Stewart Phillip, President of the Union of B.C. Indian Chiefs.

Quebec and Alaska insist on full funding of project reclamation from mining, creating a powerful incentive for companies to focus on safety and best practices.

“By failing to follow suit, B.C. has reduced this incentive and placed taxpayers at huge financial risk,” remarked Grand Chief Phillip. “Factor in the poor performance, lack of enforcement capacity and muddled political direction of the ministries of mines and energy and of the environment, and the failure to ensure all mines are safe and held accountable – and British Columbians have a great number of reasons to mistrust the mining sector.”

The Union of B.C. Indian Chiefs released an in-depth study by economist Robyn Allan days after a scathing report by Auditor General Carol Bellringer detailed a damning failure of the province’s environment monitoring of mines and failure to ensure companies are liable for the cost of accidents and remediation.

“As Ms. Allan’s report explains, this failure to hold companies responsible rewards risky behavior because when companies know they can escape being held financially responsible for reclamation, they are more likely to cut corners on safety measures, leading to more accidents and more severe consequences when they happen,” stated Grand Chief Phillip.

Ms. Allan’s analysis details how the incredibly irresponsible regime identified in the Auditor General’s report has left taxpayers liable for even more than the $1 billion identified by Ms. Bellringer – and lists steps needed to protect the environment and public coffers.

The analysis shows the Ministry of Energy and Mines had $1.3 billion in site reclamation costs that hadn’t been funded by mine operators as of March 31, 2014, and notes that amount could be higher today because of a spate of recent mine closures. However, the province no longer makes the figures publicly available. The province has also assumed responsibility for reclaiming abandoned mines, putting taxpayers on the hook for a further $275 million.

The UBCIC calls on the B.C. government to adopt Ms. Bellringer’s report and Ms. Allan’s recommendations on mining liability, including requiring companies to provide full financial security for estimated reclamation, to demonstrate they have the necessary coverage in place to cover accidents such as tailings dam collapses like the one at Mount Polley, and to establish an industry fund to cover the cost of dealing with closed and abandoned mines so taxpayers are not left to pay costs for environmental harm.

The UBCIC also endorses and fully supports the call by First Nations Women Advocating Responsible Mining and others for the government to engage First Nations communities as environmental and project monitors and help them establish and fund on-the-land Guardians programmes.

Underfunded Reclamation: The Province doesn’t require mining companies to secure the full cost of restoring contaminated landscapes, rivers and communities. After being saddled with several mine closures in the 1980s-90s, the province planned to establish full security by 1997. This never happened. In 2014, it is estimated the Province held $723 million in security against a liability in excess of $2 billion. That’s $1.3 billion of unfunded liability.

Insufficient Funds for Accidents: B.C. does not require companies to guarantee they can afford to respond to a catastrophe. They don’t have to post bonds. It could easily change this. Others have. For example, after the Lac Megantic tragedy, the Safe and Accountable Rail Act was changed to compel companies to provide proof they can cover the cost of hazardous spills.

Financial Incentives for Reckless Behavior: Current provincial policy increases the risk of disasters. With no clear liability, some companies cut corners and flout safeguards. They have few inducements to invest in techniques like dry stacking that lower reclamation costs and reduce risk of spills, because there’s no incentive to use Best Available Technology when they may never be held accountable if disaster strikes.

Sweetheart Deals Favoring Miners over Taxpayers: MEM routinely lets companies off the hook for even minimal financial assurance. When operators run into economic trouble or face steep reclamation costs, some companies negotiate with MEM to accept lower security deposits—despite the fact that struggling mines are more likely to default and stick taxpayers with the bill. The Auditor General of British Columbia recently published a report singling out MEM’s inability to require companies to offer financial assurance for environmental liabilities. Despite “accepting” the Auditor General’s recommendation to ensure the reclamation estimate is accurate and security held sufficient (1.3), the Ministry’s response is void of action and accountability. It doesn’t have to be this way.

British Columbia can create an effective financial assurances framework for restoring mine sites and responding to mine disasters. Here are a few necessary steps outlined in Ms. Allan’s report:

Pressure mounts between the provinces over the Trans Mountain Pipeline Expansion

Be the first to comment on "B.C. Encouraging Environmentally Risky Mining and Creating Massive Taxpayer Liability"