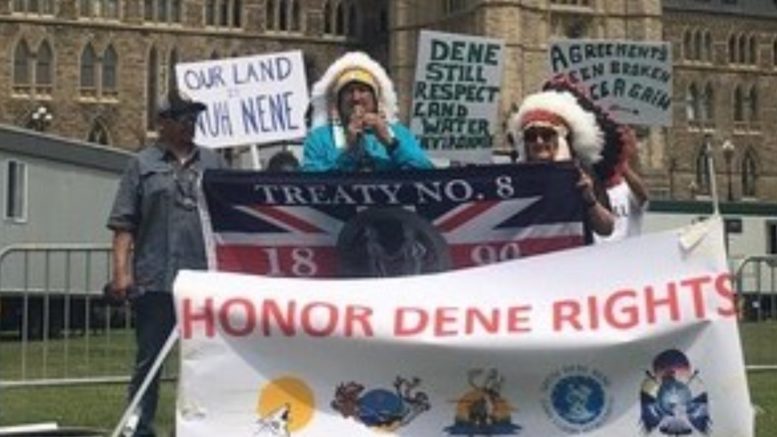 BLACK LAKE, FOND DU LAC and HATCHET LAKE FIRST NATIONS, July 19, 2019 /CNW/ – For 20 years, the Athabasca Denesųłiné have been negotiating an out-of-court settlement with Canada for recognition of their Rights within their traditional territories in what is now known as Nunavut and the Northwest Territories.  Suddenly, without notice or discussion, Canada, unilaterally stopped negotiating in mid-June. Yesterday, the Athabasca Denesųłiné were forced, due to a legal deadline, to file an Application for Judicial Review of Minister Carolyn Bennett’s decision to shut down negotiations.

The Denesųłiné and Canada were on the verge of initialing a land claim agreement.  Then on June 12, 2019, without warning or prior notice, the Minister postponed initialing and stated that further work cannot be expected in the near future. Minister Bennett claimed more consultation was required with Indigenous peoples in NWT. This was despite Crown consultations starting in 2016. At the negotiating table, Canada had previously agreed to initial the agreement while these NWT consultations continued.

After nearly a month of repeated requests, Minister Bennett has refused to explain her action. On June 21 the Athabasca Denesųłiné requested of the Federal Court, and the Court agreed, that a mediated process be initiated to find a way to resume negotiations. The Application for Judicial Review is in case the mediated process proves unsuccessful.

The Athabasca Denesųłiné expectations were high that after decades of struggle they were going to have rights in their traditional territory in Nunavut and the Northwest Territories finally recognized. Minster Bennett’s actions have shattered this hope.

We worked extremely hard with this federal government to build a relationship based upon respect, cooperation, partnership and trust. I felt like we were finally in a position to truly trust this government and Minister Bennett. As an Indigenous person, a Dene person, to be in a position where I was starting to trust government was a very special thing.  I feel that this trust has been betrayed by Minister Bennett. We need to be working together to rebuild this trust,” said Chief Negotiator Ron Robillard.