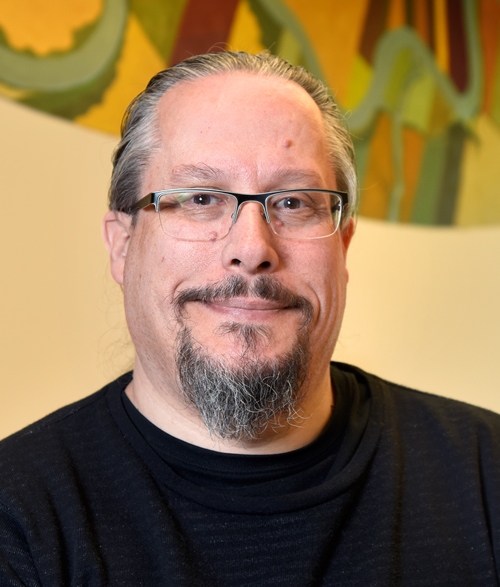 (ANNews) – Last summer, the City of Edmonton issued a Request for Proposals that called on Canada’s Aboriginal artists to submit their concepts for an Indigenous art project that will be installed across the 200-metre Tawatinâ Bridge, an important LRT line and walkway that links the city’s South Side with the downtown portions of the Valley Line LRT. Several months later Métis artist David Garneau was selected by a panel of jurors, including several highly regarded Indigenous Elders, to create paintings for the $295,000 Tawatinâ (Aboriginal Art) Bridge project, a name suggested by local Elders.

“Being chosen to lead this project was both exciting and humbling. I am honoured to have been selected,” Garneau commented in a recent conversation. He noted that he quickly realized that the sheer magnitude of the venture would call for some help, especially in preparatory and labour intensive tasks. Garneau was born and raised in Edmonton, but now lives in Regina so he engaged Edmonton artist AJA Loudin to help organize a crew of local Indigenous graffiti artists to help with three dozen of the 400 painted panels that will eventually cover the roof of the Bridge. Other young Indigenous artists in Regina are helping prepare the panels, do some under-painting, and research for the project.

The project, which is expected to take about two years to complete, will include 400 painted panels in varying sizes and shapes stretched across the ceiling of the pedestrian walkway under the tracks. The art that Garneau is creating will symbolize local Métis and First Nations culture, tradition and history and will present story after story for every person who sees it. 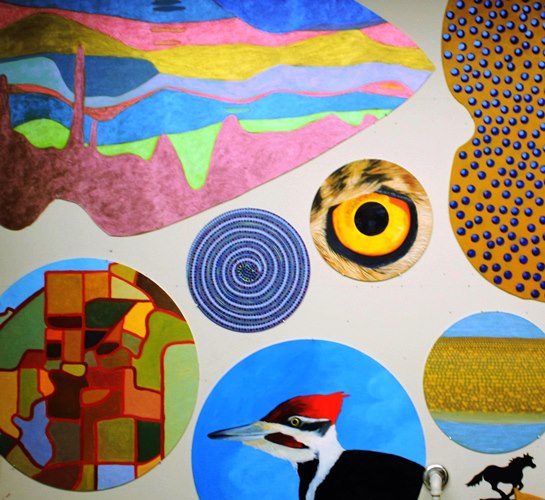 Art by David Garneau for the Tawatina Bridge Project in Edmonton. (Photo by Rae Graham)

“When people walk through they’ll be able to point to the images and talk about the stories that inspired them,” he noted. “The four elements – earth, fire, water and air – are incorporated into the art.”

Garneau said that some of the panels will be “easy for most people to understand,” while others might be “more complex or complicated, including a number of stories hidden within the artwork.”

The idea of the project, he noted, is to educate and enlighten the masses and to present an installation that honours Indigenous cultures and peoples while providing insight into the history of the region.

“A good part of this project is the community consultation process that accompanies it,” noted Garneau. “I’ve met with numerous city and Indigenous leaders on the project and the Elders continue to play an integral role.”

Garneau has already consulted with local Elders and Indigenous storytellers – including the Cree, and Métis. Their words will help him to create the symbolism for the art work currently being created for the project.

“In June,” explains Garneau, “I’ll be meeting with Metis Nation of Alberta President Audrey Poitras and her staff; I want to ensure that permission protocols are met. When I’m looking at incorporating certain patterns or symbolisms, I want to ensure that I am doing it in a way that honours the community. Louis Riel once said that the Metis people would sleep for 100 years and when they awoke it would be the artists that would lead the way. That’s important but it’s not just about the artists talking about their feelings or what they see in the world; the Metis have a bigger vision and that’s a cultural mission. That culture will be interwoven throughout the Tawatinâ Art Bridge project and it will be reflected in such things as the Red River cart, the Metis Sash, the intricate beaded patterns that symbolize Metis culture and more.”

Art panels by David Garneau for the Tawatina Bridge Project in Edmonton. (Photo by Rae Graham)

The newly commissioned artist said he enjoys getting feedback, input and advice from First Nation and Metis Elders and from the community as a whole, noting the input of one Elder who “suggested that the birds flying over the river valley could represent a flock of cranes. That was a great idea and one that will be incorporated in the project.”

The 400 panels needed to complete the project will come in a variety of sizes and shapes and will be “as small as eight inches by eight inches (20cm) and in the case of the cranes and the York Boat, as large as 21 feet (7 m).”

The panels will utilize Dibond material, an expensive but necessary aluminum media coated in plastic, that will receive several coats of paint and two coats of varnish to ensure strength, durability and longevity in inclement weather.

Art by David Garneau for the Tawatina Art Project in Edmonton.

Each panel is shaped like a plant, animal or other object related to the River Valley, and the interior will be a painting related to that first shape. For example, one panel will present the image of a Top Hat, symbolic of the importance of the beaver pelt trade during the 18th and 19th centuries; its interior will have a beaver lodge. Another will highlight the canoe, but its interior might have the painting of river. A Northern Pike, both symbolic of sustenance and survival, a way of life, has a map of Edmonton’s River lots circa 1880 on it.

Now living and teaching in Regina, the new commission has given David Garneau the opportunity to reconnect with his family, friends and roots in Edmonton. He said his interest in the project is both professional and personal in that the Tawatinâ Bridge is very close to the river lot where his ancestors set up their home.

“It is inspiring to come back here and I’ve enjoyed the frequent trips back and forth between Regina and Edmonton this year. To be able to return here to complete a proposal that honours our connection to this place is an opportunity of a lifetime. When completed, this project will honour our nation’s Indigenous communities and in particular shed light and create awareness about our connection to this place. Thanks to the input of our Elders, our civic leaders and the community at large the Tawatinâ Bridge Art Project will become an attraction that will tell many stories and present an array of art that will embrace the fauna, the wildlife, the people and the events that have taken place during the past two and a half centuries.”

The commission has also given Garneau the opportunity to reconnect with friends and others whose families and ancestors in the Capital Region date back to the mid and late 1800s. Papaschase First Nation Chief Calvin Bruno is among them.

Edmonton’s Garneau District, one of the city’s oldest neighbourhoods, is named for Laurent Garneau, who along with his wife Eleanor, fled their home on Manitoba’s Red River in 1874 and moved to Edmonton.

David Garneau was born and raised in Edmonton. He began creating art at a very young age and credits his mother for his early interest in the discipline. His popularity as an emerging artist helped propel Garneau to a full time career as an artist but first, he wanted to complete his education. He graduated from the University of Calgary (1989) with a Bachelor of Fine Arts Degree in Drawing and Painting. In 1993 he earned his Masters of Arts in American Literature. He taught at both the Alberta College of Art and the University of Calgary, and since 1999 has been an Associate Professor of Visual Arts at the University of Regina.

Edmonton and area residents are encouraged to participate in the project by offering suggestions and by relating the personal stories of their families and ancestors.

“I am looking for suggestions from Indigenous people who lived or live in the region,” encouraged Garneau. “Tell me what stories you believe need to be told. I am also looking for thoughts and ideas from non-Indigenous people who have a close connection with the River Valley. For example, I would like to include images/stories from the carvings that were part of the previous bridge. Do you have a memory to share? If so please contact me.”

Garneau’s art works are in many public and private collections; his solo exhibition, “Cowboys and Indians (and Metis?)” toured Canada (from 2003 to 2007).  He has also curated several large group exhibitions and written numerous catalogue essays and reviews and was a co-founder and co-editor (1989 to 2005) of Artichoke and Cameo magazines.

To participate in the Tawatinâ Art Bridge Project visit tawatinabridgeartproject.ca.