The Fourth Annual Treaty 6 Educator’s Conference will take place in Edmonton’s Kingsway Avenue-based, Ramada Inn and Conference Centre on January 29-30; delegates will be able to register from 6-9 p.m. on Wednesday evening, January 28 at tables in the Lower Lounge. Registration will recommence from 8-9 a.m. on Thursday morning, following a  7 a.m. ‘Rosewood’ Pipe Ceremony being conducted by Treaty 6 Elders.

“The intent of the Fourth Annual Learning for Life Conference,” noted Treaty 6 Special Education Manager Madelaine Calliou, “is to provide  an  opportunity  for  Treaty  No.  6  Educators  to  share,  learn  and  implement  innovative,  creative,  strength  based  educational  practices  for  student  success.  The  conference  will  also  promote  an  eco-friendly  environment  with  reusable  and  recyclable  materials,  methodologies  and  practices  to  promote  environmental  awareness  to  Chief  and  Councils,  Educators  and  community  members.” 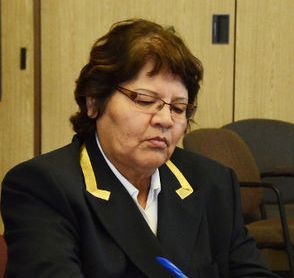 Treaty 6 Grand Chief Bernice Martial will give welcoming remarks at the upcoming Education Conference on Jan. 29-30 in Edmonton.  Article by John Copley

A continental breakfast that gets underway at 8 a.m. in the Wildrose Ballroom will be joined simultaneously with an Opening Prayer, Flag Song, Grand Entry and welcoming remarks from Confederacy of Treaty 6 Grand Chief Bernice Martial, AFN Regional Chief Cameron Alexis and representatives from Aboriginal Affairs and Northern Development Canada (AANDC).

“The conference,” explained Calliou was initiated as “a result of requests from schools for an alternative to the ATA (Alberta Teacher’s Association), which does not meet the needs of our schools. This is our 4th Annual Conference and once again it will be structured around the Medicine Wheel, incorporating it into all of our sessions and focusing on our children with the inclusion of our Art Competition.”

The two-day conference, which expects to see several hundred delegates in attendance, will include six breakout sessions that will include more than four dozen topics that will be delivered by more than two dozen presenters. 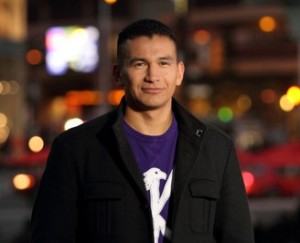 Wab Kinew will be a keynote speaker at the upcoming Treaty 6 Education Conference.

Postmedia News called Wab Kinew one of “nine Aboriginal movers and shakers you should know.” He is the interim Associate Vice-President for Indigenous Relations at The University of Winnipeg and a highly regarded host for CBC Radio and CBC Television. He has written extensively about issues affecting First Nations people in newspapers across Canada.  He has a BA in Economics, is completing a Masters degree in Indigenous Governance and is a member of the Midewin. Kinew is also an Honourary Witness for the Truth and Reconciliation Commission of Canada.

Art Napoleon is an experienced hunter, conservationist, naturalist, faith-keeper and educator who interprets life through the holistic lens of traditional Cree knowledge, values and worldview. A strong and knowledgeable advocate who cites Indigenous approaches to education, leadership, curriculum development, governance, and cultural revitalization, Napoleon holds an MA degree from the University of Victoria in the area of Indigenous language revitalization. He has also appeared on numerous televisions shows, including Beyond Words, Rex Blues, Neyiyawetan and CBC’s Winnipeg Comedy Festival. He tours regularly as a performer and speaker and also serves as a juror on many Arts and culture organizations across Canada. 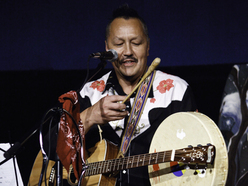 Art Napoleon will deliver a special keynote presentation on January 30 at 1:30 pm.

Running in unison with the conference will be the 4th Annual Treaty Six Educators Conference Student Art Contest.

“The student-created art contest is a part of the conference; conference attendees are encouraged to take the time to view the art and then vote for their favourite piece,” explained Calliou. “The art will be judged in three separate divisions, with twelve prizes (three in each division) being awarded to the winners.”

The art will be on display in the Ramada Inn’s Upper Lounge, immediately across from the Registration Table. Voters must cast their ballots for their favourite art by noon hour on Friday, January 30.

A Celebration of Teaching will take place following the last breakout session on Thursday afternoon. The 4 p.m. celebration will see student presenter, Amanda Gendron offer some words, before handing out specially-made ‘Years of Service’ pins to teachers that are being honoured for the hard work they do in their schools and communities.

Those attending the conference will have many presenters and topics to choose from during the two-day event. The six 75 minute-long breakout sessions will each host an average of 11 presenters with a diverse range of topics that include such areas as Engaging Students with Technology, Protocol and Traditional Knowledge,Understanding Anxiety, Language Learning Experience: A Holistic Approach, Assistive Technologies in the Classroom, The Connected Kid: Learning and Living in a Digital Age, Promoting Speech Sounds in the Classroom, Career and Technology Foundations and many more. Speakers include Blair Norton, Ryan Anderson, Cassie Calliou, John Felling, Brent Allen, Eric Large, Gerald Auger, Vince Steinhauer, Louise Osland, Dr. Abinash Mishra and many others.

Conference delegates are reminded to wear their nematic at all times to ensure full access to sessions and meals. In an effort to go-green delegates are asked to return their name tags at the end of the event so they can be disposed of in an environmentally friendly way.

“Those who return the name tags as they come in to the closing keynote comments on Friday,” explained Calliou, “could win a prize. Name tags will be drawn for prizes during the closing remarks; you have to be present to win.”

More information can be obtained online at teachersfirst.ca or by calling Wendi Ecker at 780 944 0334.