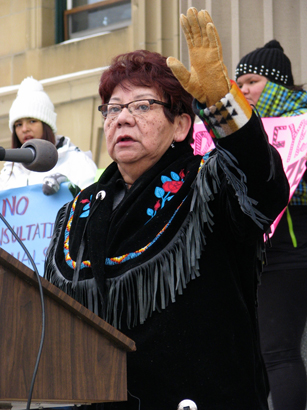 November 28 was one of three coldest days on record so far this year, but the freezing temperatures and the blowing wind didn’t keep away the several hundred people who gathered at the Alberta Legislature to protest, among other things, the province’s newly devised consultation policy, which many are denouncing as ludicrous.

“We are here today to send a message to government,” stated Treaty 8 First Nations Livelihood Portfolio manager, Chief Trevor Mercredi, leader of the Beaver First Nation. “No longer will any legislative policies, regulations and acts which negatively impact our Inherent, Treaty and Aboriginal Rights be allowed to pass quietly. Destruction to our ecosystem is occurring without our free, prior and informed consent and this has to stop. We will protect our Treaty and Aboriginal Rights, protect our lands, air and water. The environmental destruction that we are trying to curb does not just affect First Nations; Albertans should be more concerned. Our children have to live in this province together and they deserve better.”

The rally, organized and hosted by Treaties 6, 7 and 8, was held in response to what Aboriginal leaders say is a lack of meaningful consultation on the legislations, policies, and regulatory changes put forth by the Government of Alberta in recent months. 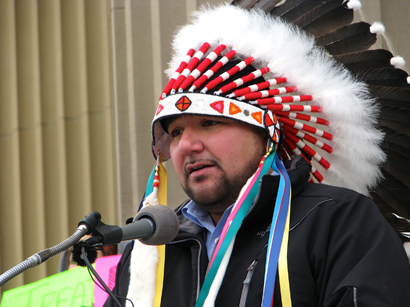 “If it wasn’t such a serious matter, policies like this one would almost be laughable,” said Mikisew First Nation Chief Steve Courtoreille. “The province fails to consult and accommodate and we complain; this new policy, one adopted without any consultation or input from the First Nations and other Aboriginal group, just gives government a license to do with what they have been doing for some time already, failing to consult and accommodate.”

The Mikisew Chief noted that he came to the rally with more than one thought in mind. He’s worried about the lack of action on the part of the Alberta government when it comes to the ongoing environmental damage being perpetrated throughout Alberta’s First Nation territories and the province’s wilderness areas.

“The government’s very slow response to what amounted to a spill of more that 1,000,000,000 litres of coal sludge and toxic waste materials into the Athabasca River from Sherritt’s Obed Mountain coal mine has me very concerned,” assured Chief Courtoreille. “These types of incidents are down-played by government and industry but the repercussions within our communities and across our lands are devastating. When the medical officer for the province says there’s toxic waste in the water as a result of this unusual and very large spill, why did it take another two weeks for the province to issue a clean-up order to the mine owners?”

So far there’s been no explanation for how or why the barrier that gave way on October 31 near the mine site occurred. Darin Barter a spokesman for the Alberta Energy Regulator told media in early November that this was first for him.

“I haven’t seen this happen,” he said. “Coal mine incidents and pit leak incidents are really rare; I was surprised this could happen.”

Cold Lake First Nation Councillor Sally Scanie told the rally participants that the government’s soon-to-be-implemented consultation act “is in direct violation of the agreements set down in the Declaration of Indigenous Rights” in that consultation and consent of First Nations was never sought by government.

“The fact is government has rejected all attempts by First Nations to become involved in the process. The Alberta government’s consultation process is a complete failure,” Scanie declared, noting that “government and industry don’t seem to realize that our treaty rights supersede oil rights. We were here first and we are not going anywhere.” 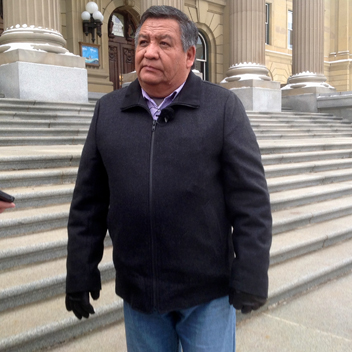 Driftpile First Nation Chief Rose Laboucan drew cheers and extended applause when she took to the podium and exclaimed: “This government is disrespectful of First Nations; they poison our land; they destroy our environment. Know your rights! Know who you are! We are not immigrants; we are the First People of this nation. We need more people speaking out about the arrogance, racism, bigotry and marginalization of our people by the provincial and federal governments of this country. We need Canadians from all walks of life to join us, to support us, to work with us to ensure that we all have a future.”

Chief Mercredi, attended the rally “to support the Chiefs, the communities and the people here today as Treaties 6, 7 and 8 join together to oppose the consultation act the government is about to put in place.” He said, “Meaningful consultation is a reciprocal process that is based on trust. Consultation signals respect for Treaty and Aboriginal Rights and we have not been engaged in a meaningful consultation process.”

NDP Official Opposition Aboriginal Critic Deron Bilous said the “irony of this new consultation policy, is that government failed to consult the very people that this policy directly affects. The Treaties have made various responses to the government that they would like to be included in this consultation, and the government continues to ignore them. This gathering today isn’t necessarily about one issue, it’s about the mounting issues that the treaties and their representatives have with this government.  The First Nations’ leaders from across Alberta’s Treaty areas have gathered here today to send a message that they don’t intend to sit by and allow their voices and their concerns to be ignored. They are here because they are frustrated with the consultation policy that this government has adopted.

“Decisions being made by the government that affect Aboriginal people and their communities are being done without consultation; they are being imposed on First Nations. For too long this government has had a paternal attitude toward First Nations and other Aboriginal groups by deciding what is in their best interests; this needs to end. Government needs to sit down with treaty representatives and acknowledge that they (too) are an order government.”

Chief Mercredi noted that the “purpose of the rally is to unite First Nations, Albertans and Canadians that support environmental

and Treaty Rights, and stand as Treaty partners to demand reconciliation and recognition to protect our lands, air, and water.”

He noted that consultation flows from upholding the ‘Honour of the Crown’ in which the government must consult in good faith with the intention of substantially addressing their [First Nations] concerns.

Treaty 8 First Nations [Alberta] have consistently stated that meaningful consultation has yet to occur with the Alberta Government concerning policies, regulations, and acts. First Nations have largely been ignored in Alberta’s processes.

“There have been countless submissions, letters, and position papers from Alberta’s Treaty 8 Chiefs, combined with years of meetings attest to this,” assured Chief Mercredi. “It is time for government to understand that we expect them to live up to the obligations set down of our treaties; we will not accept anything less.”