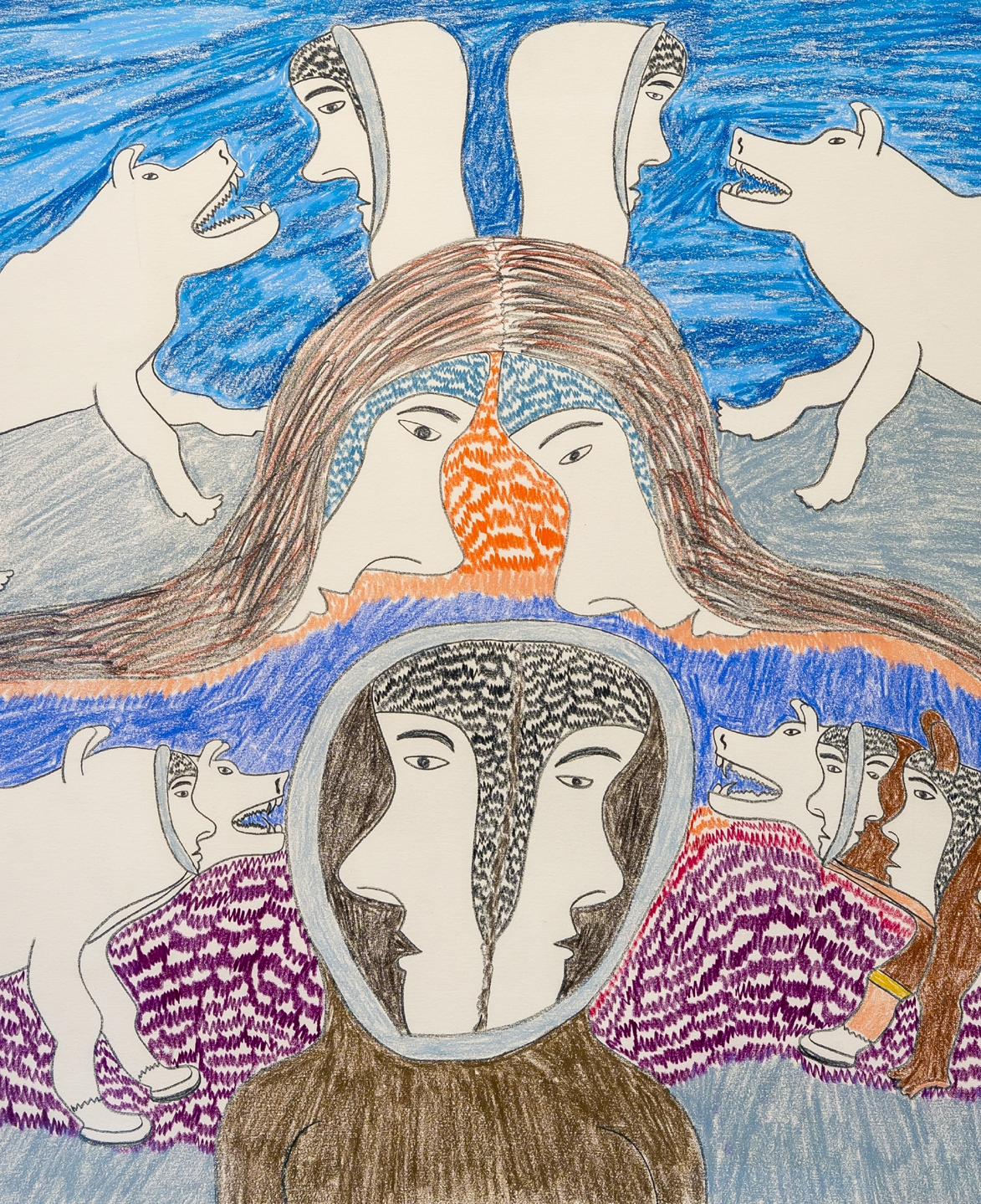 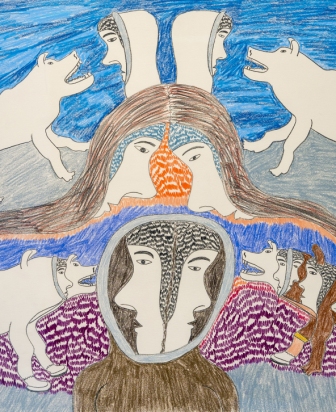 The art featured on the cover of the November 2013 edition of Alberta Native News is a detail from “Shaman Wolf Transformation” by the renowned Inuit artist Simon Tookoome (1934-2010).  It was part of a collection of works that was on exhibit at the Bearclaw Gallery in Edmonton from November 16 – 30, 2013. The exhibit celebrated the life and art of Tookoome, who led a traditional nomadic life on the land before settling in the community of Baker Lake in the Nunavut Territory.  Simon became a founding member of the Baker Lake Co-operative print shop in 1970 and continued as a self-taught artist drawing images, with an emphasis on Shamanism and Mythology.  Over the many years Simon gained a reputation as a respected leader and renowned artist.

It was through his unique imagery in drawings, prints and sculpture that Simon Tookoome became internationally acclaimed. He was a self-taught carver who began carving in stone and antler in the late 1960s, but it was his drawing that gave him the freedom to depict his ideas and images from his experiences of living on the land. Besides making his drawings, he also was a stone-cutter, producing the blocks for most of his prints. After moving into Baker Lake in 1968, he worked in construction, mining, fisheries, and education (teaching carving to school children), as well as being a cameraman and interviewer for the Inuit Broadcasting Corporation. For forty-five years he attended and participated in solo and group exhibitions all over the world, contributed to the annual Baker Lake print collections from 1971-1990, and his art is documented and referenced in many catalogues and publications.

The drawings of Simon Tookoome are a legacy that give us a rare glimpse into his shamanic world of transformation and offer us an insight into a world that has disappeared and is now all but forgotten.

In his own words in a 2009 interview, Tookoome described his life and his inspiration:

“I moved as a young lad from Uqhuqtuuq, Gjoa Haven to Baker Lake. I first got into hand drawings in 1970. I would take my 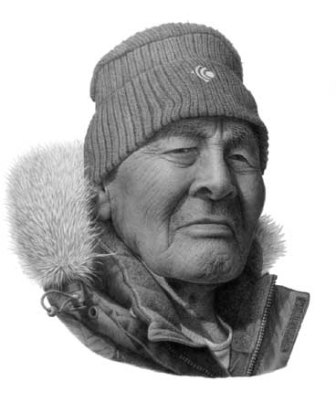 drawings to the print shop and the buyer would rip them into pieces. Out of five drawings, only two were bought and the rest were torn to shreds in front of my face. It hurt me immensely, but I recalled my mother always told me not to be upset even if people were bad to me. My mother’s advice was my saving grace. After about a year, our boss, Jack Butler, told me my art would never be ripped up again. I have continued with my art up to today. My favourite drawing is of a man with out-stretched arms on top of a mountain looking below at many people. I have done that piece a few times. In terms of carving stone, I saw others carving, so I also did soapstone carving as well. I recall that my first piece was quite large. With that piece, I bought a snowmobile. I was very euphoric. Snowmobiles were not that expensive back then.”

“My first art was a drawing I did before I moved to Baker Lake. When I came here, I saw my sister doing drawings and making money and I envied her. From there, I started to make drawings. I tried to look at other people’s work. I took what I liked and moved towards my own style of mythology and a bit or realism and mixed it together. I did Inuit legends of shamans and other Inuit stories and legends. I also tried to capture the past life of Inuit long since gone. I enjoy these themes immensely. My mother was my storyteller. As I lay in bed as a child, I would ask her to tell me stories. I also had a stepfather Tutanuaq; they were the ones that told me stories.”

Since starting to exhibit his art in 1970 until his passing in 2010, Simon Tookoome received widespread recognition for his work. His drawings and sculpture continue to be exhibited in the finest galleries throughout Canada, the United States and Europe and they hold a prominent and treasured place in numerous private and public collections around the world.

Be the first to comment on "Featured Artist for November, 2013: Simon Tookoome"