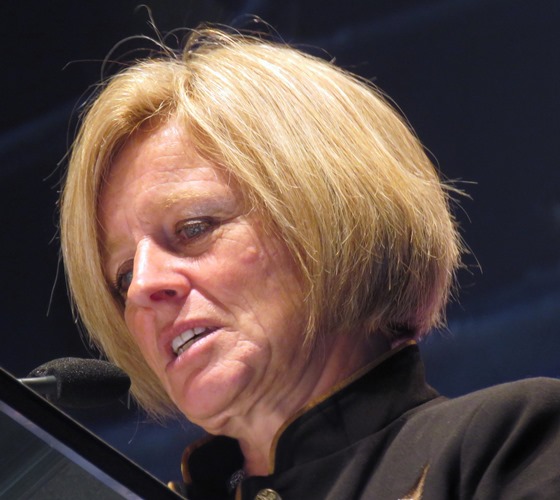 “My fellow Albertans, we face a serious situation.

I’m here before you to tell you how we are defending you, your resources, your jobs and the future of our province and country.

“Fewer jobs. Overstressed hospitals. Crowded classrooms. And for almost as long, successive governments in Ottawa and Edmonton failed to change this.

“Despite having more coastline than any country on the planet, Canada as a whole remains landlocked. Three years ago, we set out to fix this. Working together, we have made progress.

Today, Canadians in every part of the country support our efforts to build the Trans Mountain Pipeline.

“In coffee shops, on shop floors and in boardrooms around the country, I have heard directly from thousands upon thousands of our fellow citizens who understand that a strong Alberta equals a strong Canada and a pipeline to the coast is critical to that. I want to thank Canadians for their support.

“Now, more than ever, we need to come together and prove to ourselves and the world that our country works. Why? Because this morning, the Federal Court of Appeal ruled against the Trans Mountain Pipeline, quashing the decision to approve the pipeline. This ruling is bad for working families. And it is bad for the economic security of our country.

“Albertans are angry. I’m angry. Alberta has done everything right and we have been let down.

The combined result of the actions taken by the Harper government, the current federal government, the National Energy Board and the Federal Court of Appeal means that the current state of affairs in Canada is such that building a pipeline to tidewater is practically impossible.

“As a result, our ability to transport our most profitable commodity is subject to the whims of the White House and the U.S. government.

“Let’s not kid ourselves. This is a threat to Canadian sovereignty and Canadian economic security.

It is a crisis. Today, Alberta needs action.

“I have always said that protecting our environment and growing our economy can and must go hand in hand. That’s why we established a made-in-Alberta climate plan that creates jobs, lowers emissions and sets our economy on a stronger, more diversified foundation.

“Yet, as important as climate action is to Alberta’s future, I have always said that taking the next step and signing on to the federal climate plan can’t happen without the Trans Mountain Pipeline.

And so, today, I am announcing that with Trans Mountain halted until the federal government gets its act together, Alberta is pulling out of the federal climate plan.

“And let’s be clear – without Alberta, that plan isn’t worth the paper it’s written on.

I don’t take this decision lightly. Every Canadian has a stake in climate action – no one more so than my kids, your kids and the generations who will follow us.

“But Alberta, and indeed Canada, can’t transition to a lower carbon economy, we can’t build a more just, equal and prosperous society – we can’t do these things if we can’t provide the jobs and prosperity that comes from getting fair value for our resources.

“So to Ottawa, tonight, I also say this:

Successive federal governments created the mess we find ourselves in. It was broken in Ottawa and now Ottawa needs to fix it. When Alberta’s economy is held hostage, Canada is not working.

“So the time for Canadian niceties is over. Earlier today, I spoke to the Prime Minister and told him that Ottawa must take the following actions. First, the federal government must immediately launch an appeal to the Supreme Court of Canada.

“Even more importantly, Ottawa must immediately recall an emergency session of Parliament to assert its authority and fix the NEB process as it relates to this project to make it clear that marine matters have been and will be dealt in a different forum.

“Then Ottawa needs to roll up its sleeves and continue its work to protect our coast and improve consultation and accommodation relating to Indigenous peoples in the way they deserve.

“Our sovereignty and our economic security depend on it.

If the federal government acts boldly and gives this crisis the attention it deserves, construction can restart early in the new year.

“This needs to happen. Because today’s decision by the courts should put fear in the heart of any government or investor who wants to export non-renewable resources directly from Canada – including, I might say, LNG on the west coast.

“We cannot accept – no one in Canada should accept – that the only way to sell Canada’s resources is through the U.S. No other country on earth would accept this and Canada shouldn’t either, especially when we are doing it to ourselves. It is ridiculous.

“Money that should be going to Canadian schools and hospitals is going to American yachts and private jets. We’re exporting jobs, we’re exporting opportunity, and we are letting other countries control our economic destiny. We can’t stand for it.

“That’s why I have pulled out of the national climate plan and called on the federal government to take this to the Supreme Court, call an emergency session of Parliament, fix this mess and get construction restarted.

“Alberta, we are the economic engine of this country. We have built one of the greatest societies on earth, through hard work, ingenuity, and by aggressively defending our interests when those interests have been challenged.

“History calls on us to do so again today. And we will not back down.