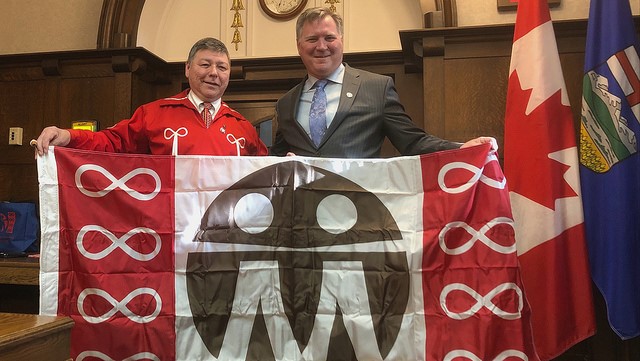 (December 2018) – To honour Alberta’s commitment to a renewed relationship with Indigenous communities and mark eight decades of history between the Government of Alberta and the Metis Settlements, Indigenous Relations Minister Richard Feehan and Gerald Cunningham, president of the Metis Settlements General Council, joined leaders of the eight Settlements to celebrate this milestone.

“This is a significant milestone and a testament to the important role Metis Settlements have in the success of our province. I look forward to our continued work together and am proud of all that has been accomplished over the last 80 years.”

Since the creation of the Metis Population Betterment Act in 1938, which formally established Metis Settlements, Alberta has been a national leader in recognizing the unique status of Metis people. Alberta remains the only province in Canada with a dedicated Metis land base and unique governance structure entrenched in provincial legislation.

“We have realized, and continue to realize, the vision of iconic Metis leaders like Gabriel Dumont and Louis Riel, who fought to preserve and protect the rights of all Metis and fought for the establishment of a Metis homeland,” noted Gerald Cunningham. “They tirelessly pursued their vision of a Metis land, governed by Metis people, and respected as distinct and unique from other Indigenous communities.”

The Metis Settlements General Council celebrates “The Big Five”: Joe Dion, Peter Tompkins, Malcolm Norris, Jim Brady and Felix Callihoo. The work of these men created the foundation for a Metis homeland in the Metis Population Betterment Act of 1938.

This vision was continued by the Alberta Federation of Metis Settlements, formed in 1975 by the “Fathers of Federation” – Adrian Hope, Maurice L’Hirondelle, Lawrence Desjarlais, Sam Johnston and Richard Poitras. The federation created a relationship between Alberta and the Metis Settlements that resulted in provincial legislation proclaiming the independence to self-govern and self-determine.

The Government of Alberta continues to work closely with the Settlements and the General Council on Alberta’s seven Indigenous climate leadership programs, which help Settlements create jobs, lower energy costs and transition to a greener economy. The Settlements and the General Council have received more than $7 million from these and other economic development programs since 2015. This includes more than $1 million for new solar photovoltaic projects.