I awoke today to the sad news that Robin Williams had passed away.

His story reminded me of one my favourite operas and one of the most well known operatic performances in modern culture. Everyone has heard it at least once in a movie, on the radio or in a TV cartoon. It is called ‘Vesti la giubba’, translated from Italian as ‘put on the costume’. The performance is done by a character who is a clown and is about to perform before an audience to make them laugh. Just before performing he has found out that his lover has cheated on him and he feels terrible, however he still has to go on stage. It is the origin of everyone’s modern idea of the tragic clown who is smiling and laughing on the outside by crying on the inside. The saying ‘the show must go on’ also originated with this opera. Like the tragic clown, Robin Williams had his own inner demons that we never saw during his lifetime because he was too busy making us all laugh. 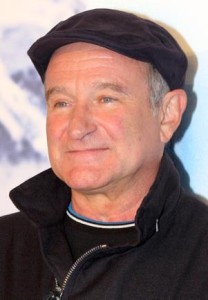 The world is a sadder place today with the tragic passing of genius comic / actor Robin Williams. Column by Xavier Kataquapit

When I heard that Williams had died, at first I was sad and then I became angry at the fact that he had committed suicide. I felt cheated by him. Williams was one of the great comedians that I enjoyed growing up on the Rez in Attawapiskat. He was a comfort for me over the years and I was counting on him taking me on many more laughing adventures.

He made so many really funny movies and happily I have seen most of them. My first exposure to his amazing talent was in the movie Popeye. It was a big hit with a lot of First Nation people as most of the Elders grew up with the cartoon and all of those wonderful characters like Popeye, Olive Oyl, Sweet Pee and Whimpy. I recall my mom and dad and the entire family in tears with laughter as Williams joked, sang and danced with the refrain of ‘I yam what I yam’. He made that moment in time special for all of us and swept us away from all our toils and troubles.

In the movie ‘Hook’ as Peter Pan he took myself and my friends on a magical childhood adventure. He made our childhood fantasies come alive. I can still see him swinging over Captain Hook’s head with the Lost Boys at his side. I recall staring out of my bedroom window and wishing Peter would come down and invite me to wonderful adventures in Never Never Land. As the voice of the Genie in ‘Aladdin’ Williams brought his stand up comedy to a big boisterous blue buffoon.

By the time Mrs. Doubtfire came along I had become accustomed to expecting Williams to visit me from movieland to make me laugh. I also began to see him as more than a comedian as he was so sensitive and intelligent in every movie he chose to make. In the ‘Bird Cage’ he along with Nathan Lane broke down so many preconceived ideas about gay people and they did it by making us laugh. ‘Patch Adams’ was not one of his biggest hits but it made me realize the medicine and medical care could be much more affective with a large dose of good humour and sensitivity.

In general we Cree up the James Bay coast have a lot of respect for people that make us laugh. To a great degree our culture functions on humour. Just about anything negative that can happen to a people has come to us over the past 100 years but we have survived. We are a little tarnished, a bit frazzled, somewhat traumatized but still very forgiving, open and ready to move ahead with a good laugh at all the insanity in the world.

Robin Williams and his mentor Jonathon Winters made life a little easier for everyone and although these two rapid fire masters of improvised humour never knew it, they put a light up in some dark moments of my life. We Cree understood the quick wit of these two geniuses because we grew up using humour as a means of survival. I recall often being able to find humour in even the most tragic or terrible situations and of course this was geared to be able to move on and put the past behind me. If my family, my friends and my neighbours could still find a way to help each other along with a smile, a joke, a funny anecdote or legend then we knew things had a good chance of working out for the best. We Crees up the coast are very good at improvisation on many levels and humour has always been a winner for us.

I plan on having a Robin Williams movie night with friends this evening. I am sure the loons, ducks, cranes, squirrels, lynx, skunks, chipmunks, bears and wolves will wonder at our bellowing crescendos of laughter with the Simpsons from the little cottage on the lake in the middle of the wilderness. I like to think that Robin Williams and Jonathon Winters would appreciate the scene. Laughter is their legacy.

1 Comment on "Under the Northern Sky: The legacy of laughter"