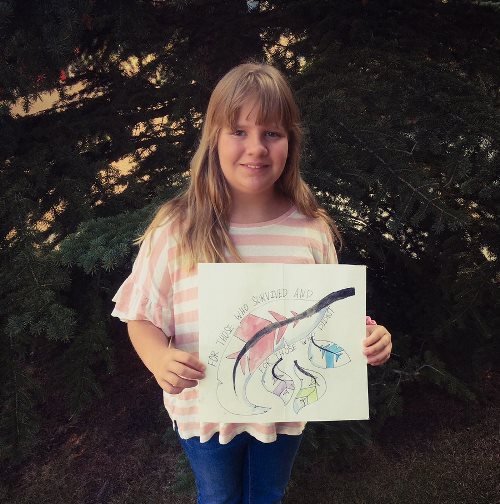 (July 31, 2018) – The Society for Safe and Caring Schools & Communities is pleased to announce the winner of the annual Orange Shirt Campaign Design Competition.

Monsignor Neville Anderson School grade five student, Sophie St. Cyr’s design has been selected as the logo for this year’s Alberta Orange Shirt Campaign and will be featured on the front of the official Alberta Orange Shirt, worn to honour residential school system survivors and to promote ongoing reconciliation.

St. Cyr is normally shy about showing her art, but felt Orange Shirt Day was important “because many people don’t acknowledge what the government did to the First Nations and to honour their traditions and to remember what happened so we don’t do it again.”  About her design, St. Cyr said “the large feather is meant to symbolize the children who survived and grew up and the three small ones symbolize the children who didn’t survive the schools.”

St. Cyr’s design was short listed from more than 665 submissions by a panel of judges that included First Nations community leaders, Alberta Teachers’ Association (ATA) and local school board representatives, community leaders, and Safe and Caring board members. It was then selected through a process of community engagement at Edmonton’s Indigenous Peoples Festival and on-line voting through the month of July.

“The art contest is a way we can keep the conversation going throughout the year to grow our understanding, recognize the harms done to residential students and to demonstrate commitment to participate in the work of reconciliation. The work the students put into this competition with their hearts and their minds really shows.”

Alberta’s Orange Shirt Campaign will run throughout the month of September, culminating in Orange Shirt Day events in Edmonton, on September 29, and in Calgary, on Monday October 1 this year. Albertans are invited to order their orange shirts featuring St. Cyr’s design through the Safe and Caring website www.safeandcaring.ca.