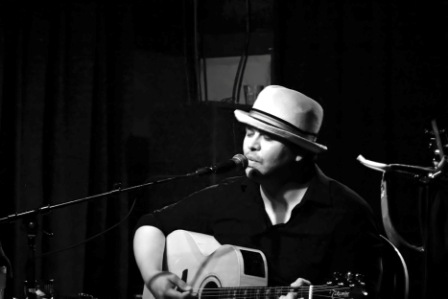 Will Belcourt loves music and has a penchant for pleasing an audience with melodies and lyrics designed not just to entertain, but also to showcase his cultural pride.

“I don’t think I actually became interested in music; I was born with it inside of me,” explained the musician/entertainer. “I think my love of music and my desire to share it with the world is a Creator-given gift that I need to explore. If I’m not immersing myself in music, then things have a tendency to go a little off the tracks.”

It would appear, however, that everything is on track at the moment, a trend that is likely to continue. Belcourt, who was honoured by the Edmonton Arts Council a couple of months ago as an artist/musician who “adds enrichment to Edmonton’s cultural scene,” is an award-winning artist who makes his home in Alberta’s capital. His repertoire is long and varied; his music is upbeat, often hard-hitting and not without a bit of cynicism. 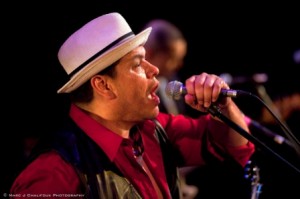 Will Belcourt at the Rubaboo Festival.   Article by John Copley

He has four albums on the market and is currently in-studio getting ready for another album release later this summer. His four successful albums – Full Moon Blanket (2007), Obliterate (2009), Epoch (2011), Crazy Life (2013) – and a proven track record both in the studio and on the road, indicate that Belcourt is a rising star whose talents know no boundaries.

Belcourt is a laid-back performer who likes when his music makes money, but that’s not what motivates him. Instead, he’s motivated by family, friends, fans and those who’ve supported him over the years.

“My parents were always supportive and still are,” he nodded, noting that even today “most of my family members come to shows when I am performing and they keep me inspired, so that’s pretty amazing. I have always had support from my home community, which is Marlboro; they really treat me well and they are the reason I keep going. Recognition isn’t something I think about, fame or fortune either. I do, however, spend lots of time trying to figure out how I am going to make my next album. I have enough music written to keep me going for years to come. I write a lot of stuff and I don’t think in terms of genre; I just love music – period.”

Will Belcourt has played every type of venue; from the street corner to the big stage and says that even an audience of one is enough to stir his musical vibes. 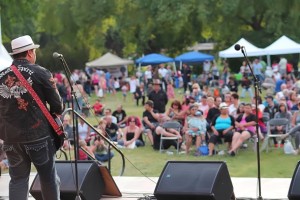 Will Belcourt performing at a summer festival.

“I’ve played on the street corner and in a television studio and just about everywhere in between,” he  reiterated. “Whether I’m playing for one person or thousands of people, it really doesn’t matter. I always give it my all, and if I am satisfied with my performance and the way I present my music, then that’s all I need; that’s what makes me happy. In the early days when it was all new, it was fun going to all the fancy parties and award shows and it still is, but it’s less important today. The art is what matters and hopefully long after I am gone, maybe my future relations will listen to what I had to say.”

And if they don’t?

“That’s cool,” he said. “In my heart I know what I do is real, and I believe that what I am doing is meaningful on many levels.”

As a group, Will Belcourt and the Hollywood Indians, have made their mark and continue to do so. In fact, the group is currently in the studio working on an album that should be finished by the end of April.

“The new album, Will Belcourt and the Hollywood Indians – Annie Baby will be presented to the public at an album release party here in Edmonton – at the Draft Bar and Grill, on July 24,” he announced.

The group is also in the process of shooting music videos and Belcourt is updating his various web connections and sites. The new album release is also enabling Belcourt and the Hollywood Indians to kick-start the year “so we can hit the ground running; a cross-Canada tour and a some added gigs in Europe this fall” will fill the rest of 2015.

“Big plans are underway to get the music out there,” noted Belcourt, “and I’m confident that the next 12 months will give us the momentum we need to move us into a successful future.”

Is the band a permanent fixture, or do you hire as you go? 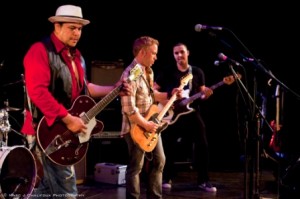 Will Belcourt and the Hollywood Indians

“I have a sort of revolving door of musicians (who are really good friends that play with me). The life of an artist especially one that is travelling constantly can be weary and full of drama, so yeah, people come and go,” he shrugged. “I have my go-to guys, of course. That includes my brother, Allen, who is an award winning, bass-playing actor. He played on the last Belcourt and Hollywood Indians album, Crazy Life. He’s also a journeyman pipe fitter with a very busy family life so he’s kind of retired from the band, but he’s always willing to help out – especially if I hound him enough.

“I also have QMike; he’s playing drums right now, but at present that’s it. When we go on tour later this fall I’ll definitely be looking for some people.’

Belcourt is currently in the studio and as such doesn’t need input from the band.

“I write and perform most of the music in the studio myself,” he explained, noting his proficiency with various instruments. “I play a few instruments so it’s just easier that way; mainly in the studio it’s just me and my instruments. It’s a very different process than performing and it usually brings out the best in me; sometimes the other side can bring about the worst so it’s always a balancing act, one that I am trying to be more aware of.”

As the main and often only singer in the group, Belcourt is also in the process of recovering after a car crash that almost snuffed him out.

“Yes,” he acknowledged, noting that, “I guess I’ve recouped but I’m still regrouping after a year away from the stage. That 2014 car accident almost killed me; I had to spend half a year in physio. Add that to some  strained personal relationships and it wasn’t long before I found myself at the end of my rope.”

Inner strength, and a bit of help from the Creator, saw Beclourt overcome his despair. 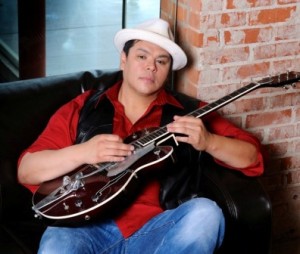 “I received solace and guidance from the Creator,” he explained. “I found an inner strength and I rejuvenated, worked on my health and found my path again. I began writing new music, lots of it, and this year things couldn’t be better. I plan to put out two albums this year, one based in rock, the other alt country, with an influence of folk and blues.

When Belcourt is not working on music he devotes time and energy to community based youth projects in the City of Edmonton where he enjoys inspiring, enlightening and educating others. He recently volunteered to teach a songwriting class through Sun and Moon Visionaries. He oversaw the process from beginning to end and the students performed their songs at a well-attended and highly successful showcase.

Belcourt is also spearheading an Indigenous music festival for the fall of 2015 to be held in Edmonton..

But his biggest challenge, and one that could make a big difference in his life, is yet to come. He’s is currently developing a musical repertoire different from his work-to-date.

“I will take my collective experiences and journey back to the start, to the figurative place that inspired and pushed me forward on this artistic path. This, of course, is the traditional Métis folk music I was raised with.”

Belcourt is planning an album that will revisit his life as a Métis Canadian, one that will include the story of the Métis people.

“I grew up surrounded and immersed in traditional Métis folk music, which I can play with great skill and confidence,” assured Belcourt. “My earliest recollections of playing music are rooted in this tradition and the creation of this material will allow me to express fundamental aspects of my culture, while also allowing me to tell fascinating family stories that have resonated in my heart, mind and soul.

“Although the stories are intrinsically rooted in my family history, I have thoughtfully taken those that are full of universal themes and ideologies. The songs I am creating from these family stories are melodically imaginative, catchy, and rhythmically diverse with high energy. They are intelligent and fresh, and have an earthy energy and purity of sound. “ 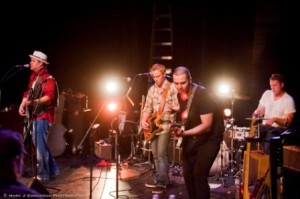 Will Belcourt and the Hollywood Indians

While Belcourt’s guitar playing is a bit dark and somewhat haunting, his fiddle playing is uplifting and deeply rooted in Métis folk tradition. His voice captures all of his influences and solidifies an artistry that has proven to be well-rounded and soulful.

“With this project,” he said, “I wish to deliver to my audience a worthwhile and satisfying album with great integrity and artistic merit. When completed, the music I have created will be raw, yet polished, primal yet finessed. It will have many layers and thought out structures and intelligent dynamics. It will deliver to the ear a sound that is rich and diverse and will have a darker, rhythmically driven edge.

“I will record this material so it will be commercially appealing, fresh, new and vibrant. It will have the ability to reach a broad range of listeners without bombarding them with unfamiliar and foreign sounds but will be cleverly crafted to draw the listener into a new musical landscape.”

2015 is going to be a great year and in the meantime, here are a few websites to enjoy.