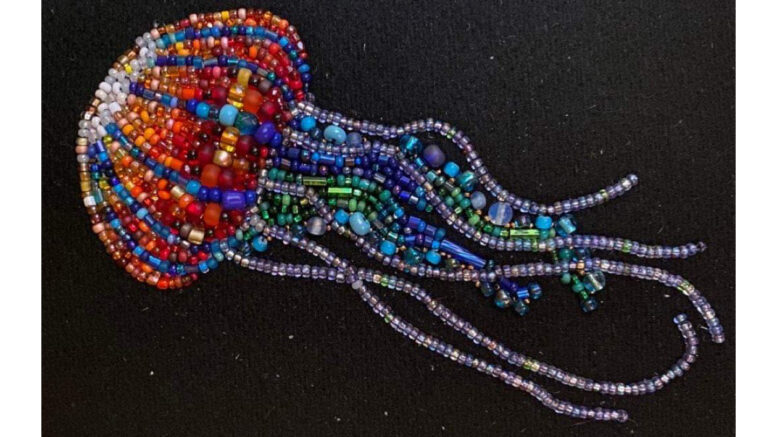 (ANNews) – Krista Leddy is a Métis artist currently located in Treaty Six territory. Her artwork has been featured in the Royal Alberta Museum’s Breathe exhibit, in the Canadian Geographic and on the cover of the book Stories of Métis Women: Tales My Kookum Told Me. Leddy spoke with Alberta Native News about one of her beaded artwork pieces: Rainbow Jellyfish.

According to Leddy, the creation of Rainbow Jellyfish began in the earlier days of the COVID-19 pandemic. She was working from home, and making Rainbow Jellyfish was something she needed to do in order to heal and cope with what was currently going on around her in the world.

“I think sometimes some of the best art comes from those really visceral moments of feeling and need,” Leddy said. “And [Rainbow Jellyfish] was definitely one of those pieces. So [I was] just trying to make something shiny and happy and light amid a world of uncertainty and fear.” 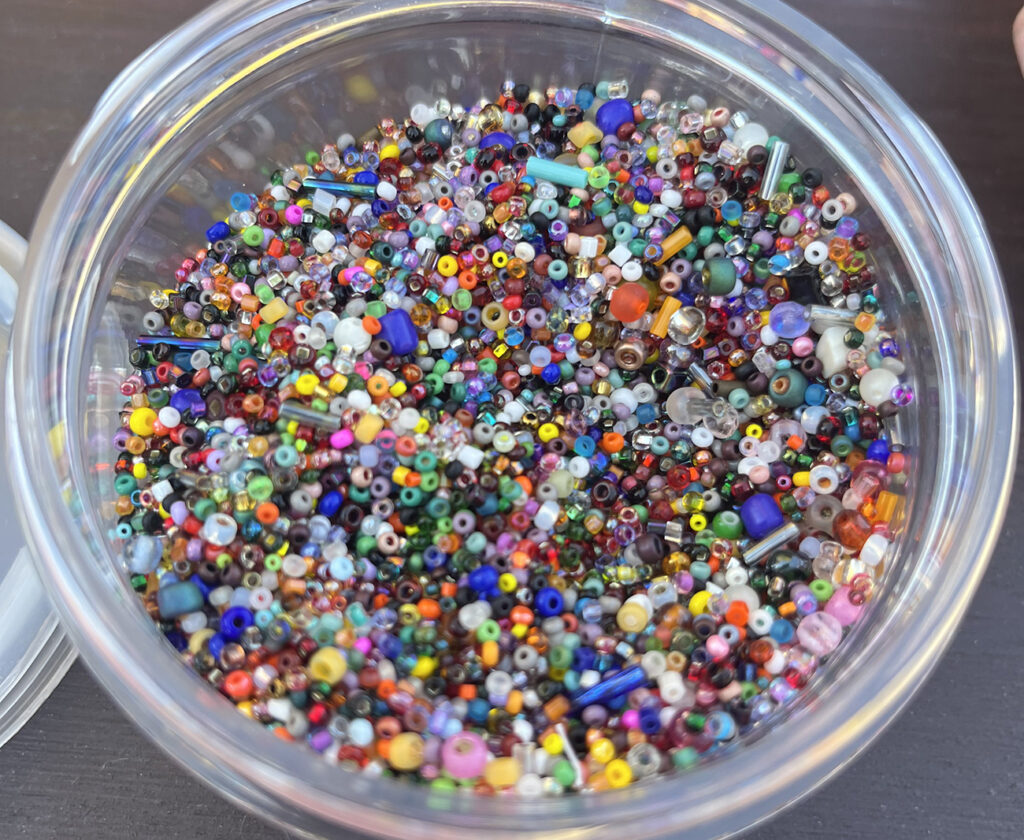 Leddy explained that Rainbow Jellyfish was also created for an online challenge she had started called the: #BeadSoupChallenge. Bead soup is a container filled with a mixture of different beads. The beads in Leddy’s soup are mostly glass, but there’s also some beads made from stone, bone, shell, and the odd piece of plastic. Rainbow Jellyfish was created entirely from the glass beads selected from her tub of bead soup, though she used beads from elsewhere for the edging. She compared beading to painting a picture.

“Instead of paint, it’s laying down each bead because that’s your colour. And with beads you don’t get to change the colours. You don’t get to mix them. You have to find different ways to tell a colour story with what you have. I think I did a pretty good job of telling an interesting story with the colours I had that [were] in my tub of bead soup.”

“I’d start beading a little bit and I’d get stuck, and then I’d sleep on it and then wake up and be like: That’s what I need to do. I just saw it in my sleep, in my dream. And whether it’s the ancestors kind of guiding me or my subconscious, it’s the experience and stories that were telling me what to do.” 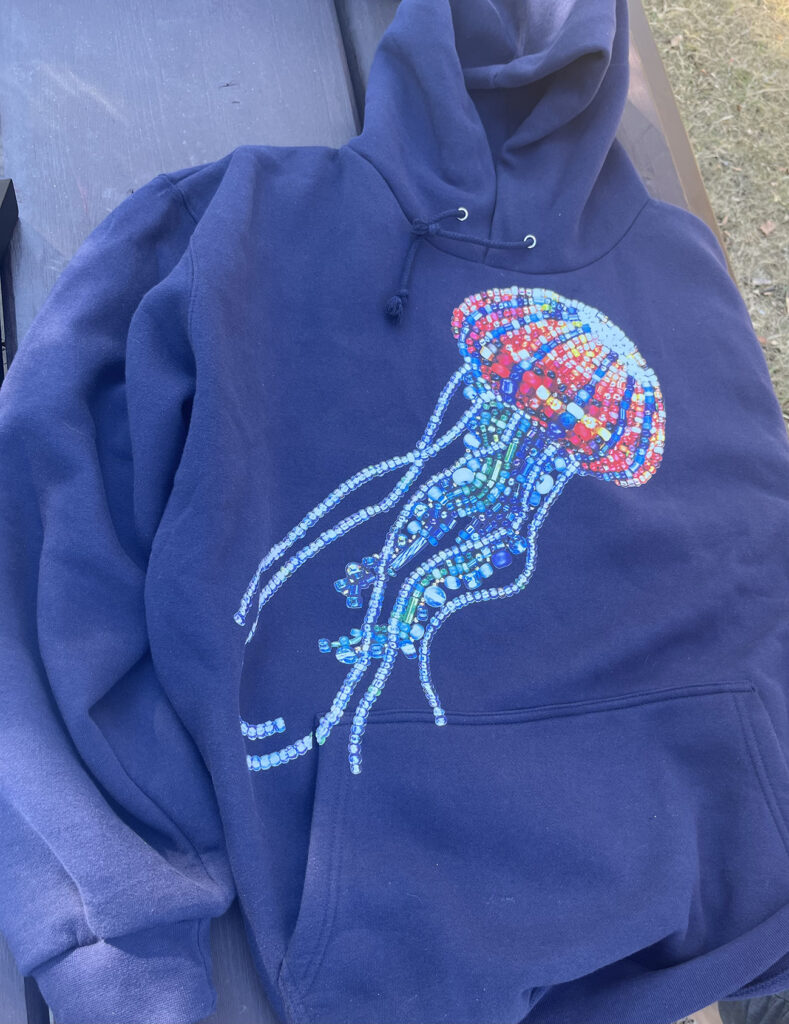 A hoodie with a ‘Rainbow Jellyfish’ print. Photo by Deena Goodrunning.

Leddy said that Rainbow Jellyfish is also the result of years of experience in beading and creating art.

“That’s years and years of practice and hours and hours of work. And even though it seems whimsical, it’s not done lightly. I invested a lot of time in [Rainbow Jellyfish] and a lot of me, because it does carry a piece of my soul and my identity in there.”

When asked about what she thinks the story that Rainbow Jellyfish tells, Leddy said: “I made this as a moment of joy and beauty and whimsy, because I needed it. Because of what was going on in the world around me. The story that has evolved from that is: recognizing what art is. What Métis art is. Hopefully [Rainbow Jellyfish] inspires other Indigenous artists to take their experiences of the here and now and tell it through a lens that comes from the training and the stories and the way they were raised that comes from their ancestors.”

“It’s very contemporary because we don’t have a lot of jellyfish on the prairies. You know, it’s not a regular Métis thing.”

Leddy said that to her, Rainbow Jellyfish is a modern telling of Métis experience.

“So this is a modern telling of Métis experience because I’ve seen jellyfish…and, so it becomes part of the new [Métis] experience. And so that’s an evolution of culture and art,” Leddy said.

When people try to dictate that only certain images are allowed to be classified as Métis art, Leddy disapproves, “because it’s taking images that sometimes aren’t really the ones that truly represent who we are. But, it’s the greater Eurocentric view of who we are supposed to be, [and what our art is supposed to look like.]”

Leddy said that she believes that if her ancestors had access to the materials she has, that their art and images used would look a little bit different. But, the stories and the underlying ideas and representations of wahkohtowin would remain the same.

“Cultures evolve. If they don’t, they die. We are always evolving to what’s around us. And so [Rainbow Jellyfish] is a representation of how cultures evolve. I still [bead traditional Métis imagery] because there’s important stories and whatnot in there. But, that’s not the only Métis art. Métis art is that and everything else that is made by Métis artists. And it doesn’t have to be beadwork either. It can be paint, it can be sculpture, it can be anything.”

In conclusion, Leddy said that she thinks everyone should give beading and the traditional arts a try.

“And you’re never going to be good at it the first time. All these things take practice and they take time,” Leddy pointed out.

“It’s okay not to like it either, so don’t think you’re any less Indigenous because you don’t resonate with doing the art. That’s not everybody’s cup of tea. But, I do suggest everyone just give it a try.”