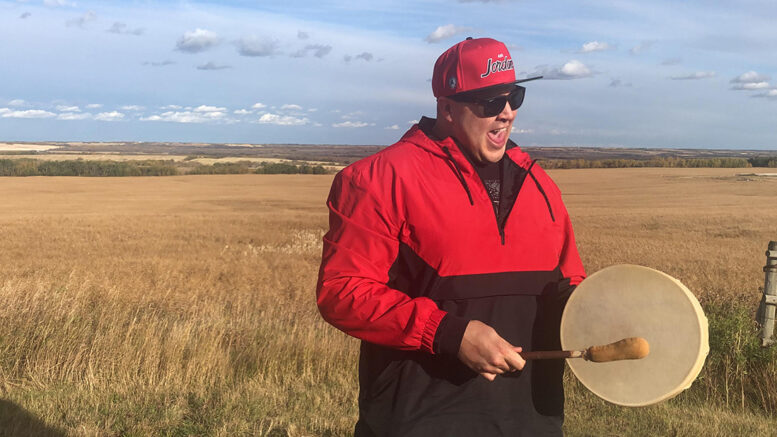 (ANNews) – Every individual has a wake-up moment or a wake-up call that signals they need to make significant life changes. Their life may spiral out of control, and they have missed the subtle warning signs that could have prevented them from reaching rock bottom. For some, it’s as simple as an argument with a friend or family; for others, it’s a Driving Under the Influence charge, court-ordered forced rehab, health concerns, or a loss of job, and for others like Brandon McDonald, it’s a stint with Corrections Service Canada.

“Prison was a blessing in disguise,” said McDonald, a proud father who lives in Grande Cache but was born and raised in Red Deer, Alberta.

He bravely spoke at North America’s first Wellbriety Conference last month, sharing details about his healing journey. Unfortunately, his story is more common than one would hope in Canada but McDonald is a positive example for others in similar situations.

According to the latest stats in Canada, 36 percent of women and 25 percent of men sentenced to provincial and territorial custody in Canada are Indigenous—a group that makes up just four percent of the national population. Add in federal prisons, and Indigenous inmates account for 22.8 percent of the total incarcerated population.

McDonald is half Cree and half Irish/German; his mother, Linda Lee, is a registered nurse, and his older brother recently signed up for 25 years in the Canadian Military. He says, “Growing up was hard on my mother, who was a single mother. My older brother took care of me when my mom worked two jobs at school.”

He says, “My dad’s family’s traditions were drinking and picking up the bottle.” He said his father is Cree, but he never taught him culturally Cree.

McDonald also explained that his mother learned a lot about Plains Cree’s traditional teachings from the Rabbit and Cattleman family of the Montana Cree Nation. However, he explained that she did not pass that information on until later years of his life. However, they helped her in her younger years.

He says, “My mom had Cree traditions, but at the time, she never taught them to me.”

McDonald explained that he learned about Cree culture from prison.

“I went to my first sweat lodge and saw my first smudge ceremony there, and it was part of my correctional plan to keep going with the ceremonies to keep me on the right track,” said McDonald. “Then I started to see all the blessings happening from the prayers to the Creator.”

He said he continued even after his correctional plan was complete and his parole was up.

“I kept going with the ceremonies and Cree ways,” said McDonald. “Prison was a blessing in disguise; I connected with some great elders who helped me stay on the right path.”

“When I was in prison, I knew I never really belonged there, I was involved with a lot of gangs that gave me that sense of belonging, but I didn’t want to spend the rest of my life in prison,” he explained.

He said he found a healthier sense of belonging in our traditional Cree ways.

“My prayers keep me going, they keep me grounded. I thank the Creator for the positive changes in my life, in my culture, I have seen people get sick and then healed,” said McDonald.

“Even positive things in my life, whether it was housing, career, employment… and my son, they all give me purpose,” he added.

He said the only thing that his father ever showed him was drinking. “It wasn’t the smudge or the lodges,” said McDonald.

As a very proud father, he explained that he is trying to break those cycles for his son and be the father he never had.

“I’m going to teach my son to lift the drum,” said McDonald.

“I’m going to teach my son traditional songs and to use that medicine in a good way, and pray to the Creator.”

McDonald concluded by saying that he was thankful to be allowed to share his story and expressed appreciation to the Wellbriety Conference for the opportunity.