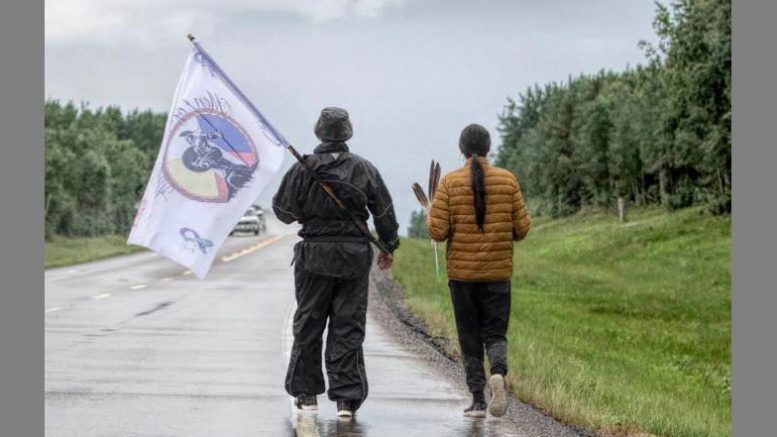 Tristen Durocher on a walk to raise awareness of the suicide epidemic among Indigenous people in the north. He will follow his walk with a hunger strike. Facebook Photo by Kandis Riese

(ANNews) – The suicide rate in Indigenous communities has reached epidemic proportions and a young Indigenous man from Saskatchewan is walking and fasting to promote awareness and effect change. In the last 8 months there have been several crises that should have resulted in action.

An article by Global News is released.

It was reported that The Makwa Sahgaiehcan First Nation declared a state of emergency in November following three youth suicides – with the most recent (at the time) being a 10-year-old girl.

At the time of the article’s release, the community of 1,000 has seen seven suicides within 3 years.

Makwa Sahgaiehcan Chief Ronald Mitsuing said, “We know all the problems here, we can try to fix them on our own, but we just don’t have the resources or the funding… If we can get trained people to come and train our people, we’ll have a long-term sustainability. Our people will be trained on how to deal with these types of situations.”

National Chief Perry Bellegarde said, “We know that too many of our young ones are taking their lives. And so we say to those young people that you’re special, you are gifted and you’re loved. Never forget that.

“We do call on this government to finally work with [our] leadership and families and people to finally implement a youth-suicide-prevention strategy. That is needed — one that supports all of our young people.” Chief Bellegrade stated.

A CTV News article is released.

The Ochapowace First Nation had declared a state of emergency following the suicides of four people in the previous three months.

“As far as declaring the state of emergency, it’s a good way to bring awareness and educational awareness of what’s going on. We need to talk about it, one thing we don’t want to do is push it under the rug,” Chief Margaret Bear said

The nation said that while many other reserves are experiencing suicide among the youth, Ochapowace is facing it with men between the ages of 30 and 45.

Onion Lake Cree Nation declared a state of emergency after a rash of drug and gang-related activity that led to increased violence in the community, as well as Suicides.

“Over half are under the age of 30 and over half are not employed,” said Philip Chief, director of operations, Onion Lake Cree Nation. “A seven-year-old tried to commit suicide in our community two months ago. There are a lot of young people that see no hope.”

Also, in the last two months, there were two deaths directly related to drug and gang activity.

The Saskatchewan government introduced a plan to prevent suicides in the province.

“Honestly, if we can save one person from suicide, this plan is a success,” said Rural and Remote Health Minister Warren Kaeding.

About 144 people die by suicide each year in the province, according to data from the Saskatchewan Coroners Service.

The NDP said in a statement to the press, regarding the Pillars for Life Suicide Prevention Plan released in May, that no additional funding is attached and called it, “wholly inadequate to save lives.”

“We’ve had so many suicides, so many young people, so many attempts. We introduced a bill two years back and then we reintroduced it as Bill 618 recently, in 2019, after the original died on the order paper,” Doyle Vermette, NDP MLA for Cumberland told Canada’s National Observer in May.

But Vermette is at a loss of words now.

A young Indigenous Man in Saskatchewan is walking to Regina from La Ronge Thursday July 2, 2020. This walk will take place to raise awareness for the northern suicide crisis across our communities, and protest against the unanimous Saskatchewan Party vote against a suicide prevention bill.

The Facebook page “Walking With Our Angels,” was created to promote the walk.

However, this is much more than a simple walk.

Once Tristen reaches Regina, he is starting a hunger strike.

Tristen said in a Facebook post, “Once I arrive at Pile Of Bones (Regina), I’m going to step onto the Legislative Assemblies lawn, walk to the front steps, and play ‘Amazing Grace’ for the families of those who’ve buried their loved ones because of suicide.

“Once I step foot on the lawn, I will not eat, my fasting and prayer begins, a hunger strike will begin: until the government passes meaningful legislation in response to the suicide epidemic across our province, not plan, not propose, not promise,

“I will fast for however long it takes. Pray for me. Pray for our kids. Pray our political officials vote with their hearts and not their careless money minds.”

The walk will being at the Graveyard in Air Ronge with a ceremony at 9am. A drum group will be present, a pipe ceremony will occur, as well as a smudge, and some prayers will be said before the walk to Pile of Bones.

From 2011 to 2016, the suicide rate among First Nations people (24.3 deaths per 100,000 person-years at risk, roughly understood as number of deaths per persons per year) was three times higher than among the non-Indigenous population (8.0 deaths per 100,000 person-years at risk). Among First Nations people living on reserve, the suicide rate was about twice as high as that among those living off reserve.

The Indigenous population of Canada is only 4.9%.

Be the first to comment on "Walking With Our Angels: Saskatchewan’s Indigenous suicide crisis"