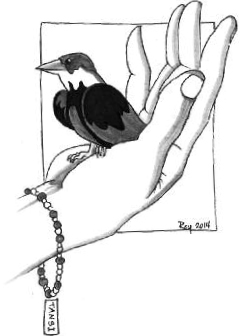 I noticed a story the other day in Wawatay News, an Aboriginal newspaper that serves northern Ontario, that featured coverage of a group of walkers from Attawapiskat. They were on a mission to walk to the parliament buildings in Ottawa to lobby the federal and provincial governments to meet with First Nations and address the issues concerning housing, suicide, education and health care. The main organizer and spokesperson for the group is Danny Metatawabin of Fort Albany First Nation who is a well known First Nation leader from the James Bay coast. I also noticed that an article appeared in CBC online which indicated that the walker’s mission was to deliver a message to the leaders of both the federal and provincial governments and to First Nation Chiefs that the time to honour the treaties is now. The four original core group of walkers include Danny Metatawabin of Fort Albany and Attawapiskat trekkers Paul Mattinas, Brian Okimaw and Remi Nakogee.

It won’t be an easy task to walk from Attawapiskat along the winter roads to the south all the way to Ottawa. The walkers who have made it to Moosonee are now faced with trying to establish the best way to continue their journey south to Ottawa.

The group of walkers is receiving assistance and support from the First Nations communities along the James Bay coast. Chief Theresa Spence of Attawapiskat First Nation has contacted the Mushkegowuk Council Chiefs in support of the walkers and she is asking for a national meetings of Chiefs to deal with the issues raised by the
walkers.

As the walk progressed, they were joined in Fort Albany by Michael Knapaysweet, Brent Edward and Chief Rex Knapaysweet. Albert Iahtail, of Attawapiskat First Nation, also joined the group in Fort Albany.

The walkers were inspired to begin this project based on last year’s walk that started with six Cree youth from Whapmagoostui Quebec, which is on the east coast of Hudson Bay. They made it all the way to Ottawa and they were joined by hundreds of people as they completed their 1,600 km journey to Ottawa last March. The walkers at the end of their Idle No More trek met with Aboriginal Affairs Minister Bernard Valcourt. When they reached Ottawa, they were joined by thousands of people to celebrate their arrival.

It makes me very proud to see my people pursue nonviolent protest action to bring important issues before the public and as a means to lobby politicians to do something constructive and make things better. I know there are probably a lot of people that will just fall back on making racist and bigoted comments about First Nation people but maybe they should realize that what governments do affects all of us. Maybe it is time for everybody to be concerned about their own well being and a good future for the generations to come.

Life in this great country is not just about making money and making really rich people a lot more wealthy. It also has to be about taking care of our land, our rivers and our people.

The Attawapiskat walkers are moving ahead with their non-violent walk at a time when Neil Young, a famous and respected Canadian song writer has raised his voice for the land and its people. I have been reading in most of the mainstream media for the past couple of days about Neil Young’s ‘Honour The Treaties’ Tour. Young explained that
his tour is in support of First Nations in their fight against expanding oilsands projects in Alberta because of their destructive impact on the environment. He has dedicated funds from four concerts across Canada to benefit the Athabasca Chipewyan legal fund in challenging expanded tar sands development in Alberta.

Neil Young has always been admired as a Canadian hero when it comes to activism and standing up for people. He has always been a supporter of First Nations in this country and he has a history of supporting environmental and conservation issues.

Everyone is entitled to make a living and the use of our natural resources has a lot to do with making that a reality. However, we also have to care about our environment and we have to be ready to stand up and be counted when it comes to making sure that we live in a just and caring society. I believe in good people getting together for a good cause to fight against the greedy few who have enough wealth and power to think that they can do anything they want. Eh-Koo-Teh-Neh Pee-Moh-Teh Nee-Kah-Moo (That is the way, walk and sing).

Be the first to comment on "Walking and singing for change"