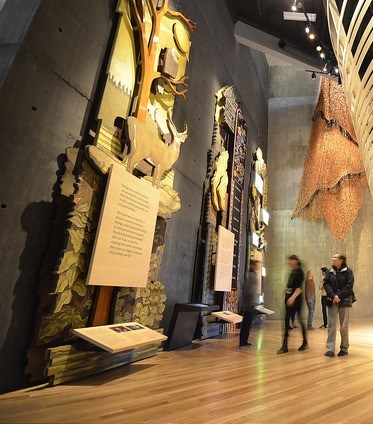 Winnipeg – January 26, 2018 – As the 70th anniversary year of the Universal Declaration of Human Rights begins, voices of Indigenous youth across Canada have been shared through a new website, where they reflect on human rights and reconciliation

Video and artwork from the “Spirit Panel” project – which created visual and interactive exhibit elements for the Indigenous Perspectives gallery at the Canadian Museum for Human Rights (CMHR) in Winnipeg – can now be explored online. The project began in 2013 as a partnership between the National Association of Friendship Centres (NAFC) and the CMHR, involving workshops with Indigenous youth, artists and Elders held at Friendship Centres in every province and territory.

“This project highlights the important role of Friendship Centres as gathering places for both youth and Elders, where culture and creativity can mix in profound ways,” said NAFC President Christopher Sheppard. “I thank the young people and artists who shared so many pieces of themselves during this journey together.”

CMHR President and CEO John Young said digital outreach allows the museum to take human rights stories beyond its walls. “Sharing the perspectives of Indigenous youth is important for reconciliation in Canada and for human rights education in general.”

Online visitors can virtually examine the 13 artistic wooden Spirit Panels created by the Indigenous artists, inspired by discussions with youth at the workshops. In the Museum, the Spirit Panels adorn a circular theatre designed to resemble a woven basket, which plays a 360-degree surround film sharing perspectives on human rights narrated by four generations of Indigenous women and girls.

The new website also includes videos of Indigenous youth explaining their visions for human rights – equality, respect, honesty, freedom, the right to speak your own language, practice your culture and be free from discrimination. For example:

Some express their frustration about limitations to fulfillment of their rights. For example:

During the project, Elders and artists engaged youth in ceremony, songs and sharing circles focused on conversation about rights and responsibilities from their own perspectives. The artists then led the group in hands-on visual art activities to creatively represent their thoughts and create a collective statement about human rights. Indigenous filmmaker Jordan Molaro documented the project and created videos from each community.

“There are many Indigenous youth who are engaged across the Friendship Centre Movement,” said the NAFC’s Aboriginal Youth Council president, Rae-Anne Harper. “They are committed to making change through civic engagement and many of their stories are being heard. This website will keep their perspectives and thoughts relevant and alive.”

The Canadian Museum for Human Rights (CMHR) is the first museum in the world solely dedicated to the evolution, celebration and future of human rights. Located in Winnipeg, Manitoba, it is the first national museum in Canada to be established outside the National Capital Region. Using immersive multi-media technology and other innovative approaches, the Museum creates inspiring encounters with human rights as part of a visitor experience unlike any other. Learn more at www.humanrights.ca.