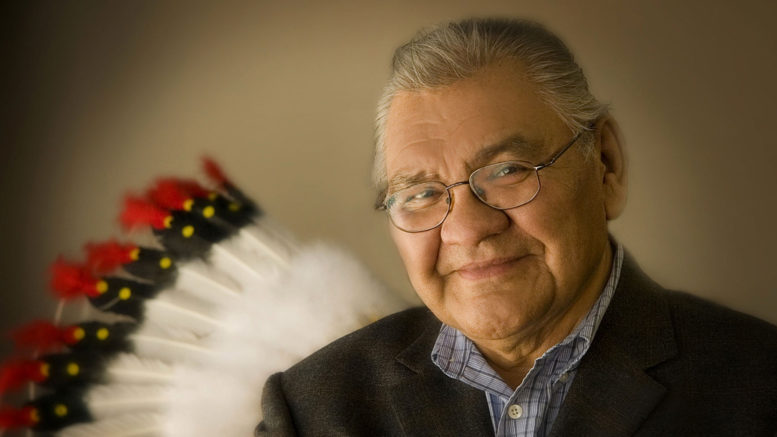 (ANNews) – Victor Buffalo is a respected Alberta leader and entrepreneur. His pioneering work has helped First Nation businesses across Canada to thrive. His passion for education has opened new doors for Samson Cree First Nation members.

In an exclusive interview with Chevi Rabbit, the former Chief of Samson Cree Nation and founder of Peace Hills Trust opens up about his thoughts on the Pope coming to Maskwacis AB next month.

“I’m very excited that the Pope is coming to Maskwacis. I’ve tried to be a devoted Catholic and go to church every Sunday, and do all the things to be a good Catholic,” said Victor Buffalo.

“For me, it’s a lifetime experience for the pope to come and apologize for the past mistakes of the church community.”

Buffalo was placed in residential school in 1948 when he was seven years old and was there most of the time. In all, he spent 13 years at Residential School.

“My dad was in the Charles Camsell Hospital and my mom was not able to look after us,” he explained.

Charles Camsell Hospital was founded in 1913 in Edmonton and originally functioned as a Jesuit College for boys. In 1942, the building was bought and operated by the American Army during the construction of the Alaska Highway, and in 1944, it was sold again to the Government of Canada.

Buffalo said that he is happy that the Pope is coming to their Nation. Hw commends the efforts of Chief Wilton Littlechild and others, and stresses that it will be a respectful gathering.

“I know Doctor Wilton’s little shop has worked very hard to make that happen through the Truth and Reconciliation Commission – and he met the Pope several times privately and with other people,” said Buffalo.

Reflecting, he said that he is now 80 years old. Most of his fellow students died miserable deaths and died of alcoholism. “They were unable to deal with the trauma inflicted on them at Residential School.”

He said he asked Chief Littlechild why they have been able to live longer than their classmates. “His response is our spirituality,” said Buffalo.

In addition to abuse, the harm of the IRSS included “the government’s way of turning our minds around. You can talk about all the problems that happened at the residential school, such as sexual abuse, violent abuse, and physical abuse,” he said, but just as harmful, “was that the government was trying to change our minds. The first thing they did was get rid of the Cree language.”

He explained, “I never spoke a word of English, so every time I spoke my language, I got strapped. The older kids that were already learning the English language used to laugh at me and the others who could not speak English.”

“Our people went underground to perform some of those ceremonies. They perform some ceremonies today like the Sundance and giveaways, but we lost a lot; we had more,” said Buffalo with a heavy heart.

“There were a lot of ceremonies that we lost, and even now, we sometimes forget proper protocol.”

Buffalo also remembers being “locked in” on the reserve. “We weren’t allowed to leave without the Indian agent’s approval,” he said.

“We had to get a permit from the Indian agent, and we lived in a Police State. I also remember when we were kids, when the RCMP came to the houses, we used to run and hide. We just scattered like scared animals.”

“I tell people now, that the biggest thing we lost was love. It was only when my mother was drunk, she told me that she loved me. I teach my children about healthy love, and I tell them I love them.”

Buffalo says that many people who came out of residential schools had a very corrupt idea of love. “They thought love was a sexual thing. Our people need to remember healthy love; love is what we need. I always tell people that love is the fruit of our soul.

“Love is what residential school took away from us. Indigenous families need to begin to love each other again and to say it.”

Buffalo didn’t even know his siblings at the residential school.

“I never saw them, I never talked to them; it was only after we left the school that we finally got together.”

“We need to return that healthy love to work into our families,” he concluded.

Buffalo welcomed the Pope’s apology in Rome and is looking forward to hearing it on Maskwacis. “He’s a man of respect and genuinely sorry for what happened. We expect thousands of people to come to Maskwacis from USA and Mexico. We know a lot of people will protest as some families are still upset at what was done to their families – but it will be respectful.”