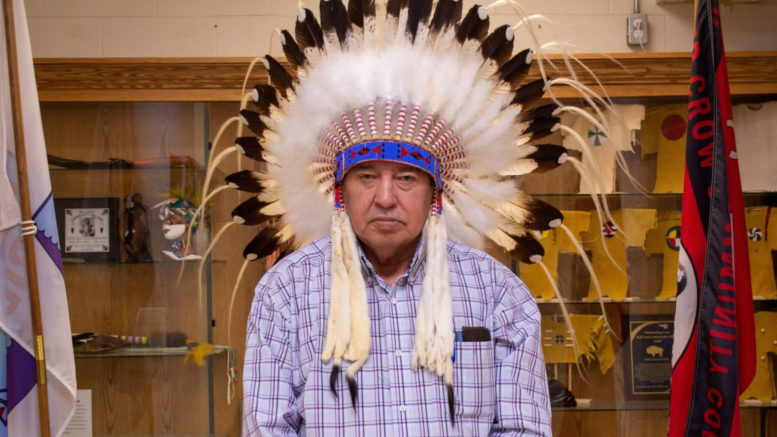 These efforts have earned the current Red Crow Community College president an Honorary Doctor of Laws from Athabasca University, which is awarded to individuals who have made outstanding intellectual or scholarly contributions in their field.

Weasel Fat’s efforts reflect his own experience with schooling, both in his grade-school and in his post-secondary experiences. 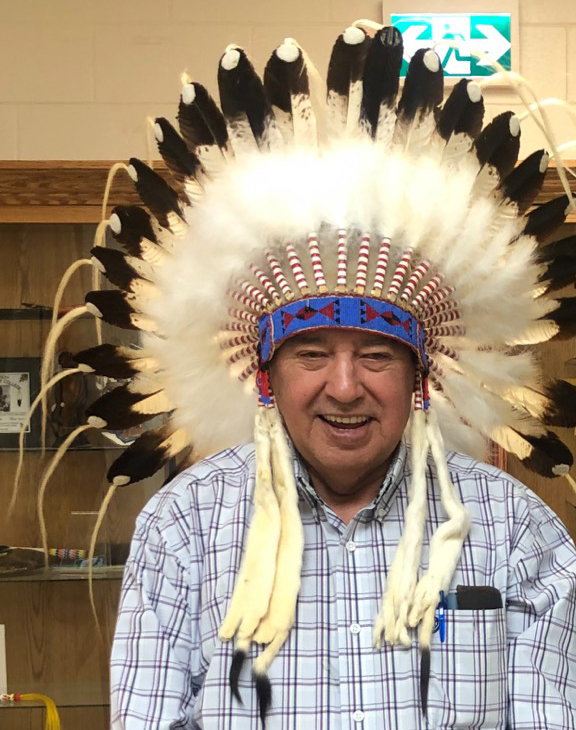 “There was really nothing in the curriculum that taught about Indigenous people. It was always studying other cultures, rather than our own culture,” he said. “So that’s what Indigenous education is about. It’s to reclaim our identity as Blackfoot People and learning our language, so we can make better sense of our Blackfoot culture and identity.”

Weasel Fat’s leadership on this issue, among others, earned him recognition as a leader from his own family and community; he is also known by the Blackfoot name Namahkan. He explained Blackfoot names are often bestowed on individuals throughout their life in recognition of certain characteristics or accomplishments.

The name Namahkan was originally held by one of his ancestors, who signed the Lame Bull Treaty between the U.S. government and the Blackfoot People. The name signifies leadership. He said it is now his obligation to honour the name by considering how the original Namahkan would have behaved, and then meeting that expectation or exceeding it.

That capacity for leadership is one he began to show throughout his life, even before the name was bestowed on him.

Weasel Fat said some of his first memories of education are from his family. His first language was Blackfoot, and he was able to understand the Blackfoot language from an early age.

When he was about 8 years old he stayed with his grandparents for the summer. He recalled how his grandmother would tell him stories in the Blackfoot language – lessons that were intended to teach him about the world around him and about the Blackfoot culture and worldview.

“That’s where my early foundations of Blackfoot culture really started, because of that experience with my grandma,” he said.

That experience contrasts sharply with his experience in settler-run schools, both the residential schools on Blood Tribe territory in southern Alberta and the integrated schools in nearby Cardston and Fort McLeod. The Truth and Reconciliation Commission of Canada released reports in 2015 outlined the history and long-lasting negative impacts of Canada’s historical approach to educating Indigenous children.

Weasel Fat said he experienced some of the challenges outlined in those reports, but in recalling his experience he spoke mainly about how he felt disconnected from the Blackfoot language and culture.

“And maybe that’s the way education was done at that time. But you know, it wasn’t good for me, personally,” he said. “I guess I just kind of learned not to like school because of that experience.”

Yet already in those early years, before he was given the name Namahkan, he was showing he had a capacity for leadership and helping people. He recalled going to the residential school at 8 years old and looking out for some of the other younger students there who had been bullied, or were just feeling really lonely.

Education as the new buffalo

Weasel Fat wasn’t left with a good impression of school, but he said his parents always told him how important education would be in his life. In the same way that the buffalo on the prairies provided the Blackfoot People with everything they needed, education could now provide that.

Although the description of education as “the new buffalo” was not unique to Blackfoot culture, his family always spoke about the importance of getting an education to be able to make a good living.

“They were always telling us to get an education; you’ll get a good job. That’s all I heard from my parents, because they went to school too,” he said.

His parents had not been able to attend college or university themselves, but he said he saw how they were able to support themselves with skills they had learned – agriculture in his father’s case, and homemaking in his mother’s. His parents had known education could help them provide for themselves, and so he knew it could do the same for him.

Discovering his role as an educator

Weasel Fat completed an agricultural technology program at Lethbridge College in the 1970s, and did fairly well, which made him realize post-secondary education was something he could do successfully. In the following 17 years when he worked in the agricultural industry, he said he found he liked teaching others, whether about farming techniques, safety requirements, or equipment operations.

When he decided to go to university, he chose to pursue a bachelor of education because he wanted to continue teaching. After completing his degree from the University of Calgary, he worked as a substitute teacher for a few years. In 1994, he joined Red Crow Community College in Stand Off, Alta., to help develop and teach its adult literacy program. He won the Teacher of the Year award at Red Crow College in 1995.

The college’s mandate is adult education in the community, and in those early days that mostly meant adult literacy and academic upgrading. The college would offer programs semi-regularly, when there was enough demand to run particular programs.

Returning to school to advance his career

Weasel Fat said he enjoyed the work he was doing, but in order to move into a leadership position at the college as the adult education coordinator—a role he described as roughly equivalent to that of a school principal—he needed a master’s degree.

He earned a master of education in 1997 from Gonzaga University, based in Spokane, Wash., because that program was hosted at the Red Crow campus. That experience helped to underscore the need not just for education to be accessible to people in their own communities, but also the need to acknowledge the value of Traditional Blackfoot Knowledge and culture within a formal education system.

“We were always seen as simple people wandering aimlessly in the country. But that isn’t the case,” he said. “We had a purpose in life, and we know that. And we were able to live in an extreme environment because we knew how to live off the land.”

After 5 years as the adult education coordinator, when Red Crow Community College began offering more certificates, diplomas, and degree options, Weasel Fat was appointed as the college’s first vice-president of academics in 2002.

“With those two programs, the idea was to promote Blackfoot culture in academic programs,” he said. 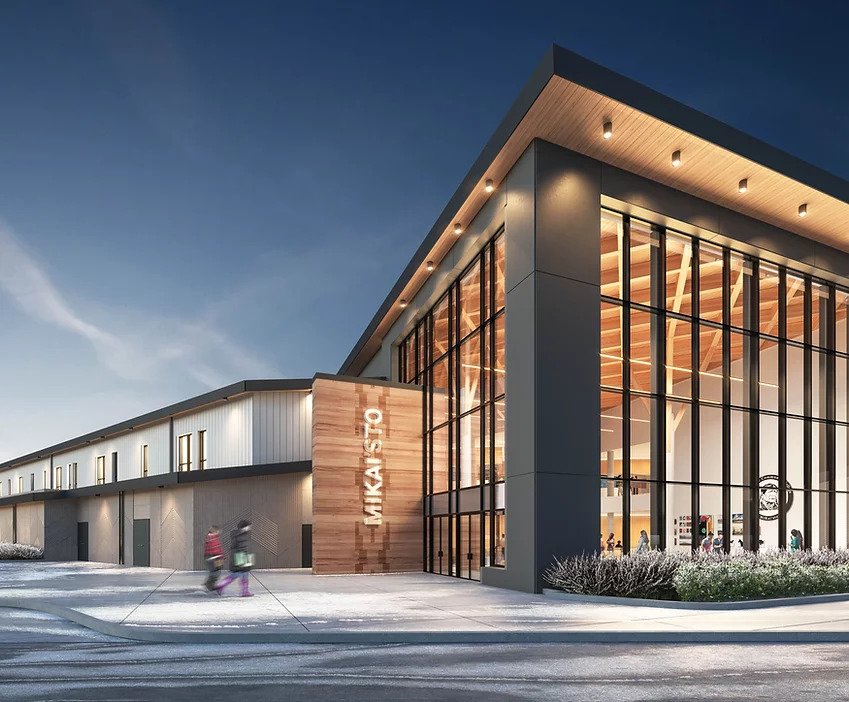 The new campus of Red Crow Community College is scheduled to open in fall of 2022. Photo supplied.

This included work to forge partnerships with other post-secondary institutions via transfer-credit programs, as well as work to more formally recognize the Knowledge held by Blackfoot Elders in the community by awarding them doctoral designations.

The college faced a significant challenge in 2015 when its building, a former residential school, burned down. The Blood Tribe provided a former elementary school building to the college to continue its operations, and the college leadership’s work to develop a new campus took on a greater sense of urgency.

“I want to give credit to the Blood Tribe leadership, chief and council,” he said. “They committed to funding half of the building costs, after surveys of community members showed overwhelming support for a new building. That helped us get matching grants from the federal government.”

That work is nearing fruition. After years of planning and advocacy Weasel Fat said the new campus will accommodate up to 900 students when it opens in fall 2022.

The future of Indigenous education

The new building will present further opportunities for academic programming in the community, such as offering more transfer-credit options where the partner institution delivers the course at Red Crow’s physical facility—something Weasel Fat said will help break down barriers for Blackfoot members to access and complete post-secondary education.

“I’d like to make sure there’s a higher rate of completion and graduation for the Red Crow students who are in our community,” he said. “We could improve on that just by having more post-secondary programs offered on site.”

He said the college has also seen an increase in retention and graduation rates because students have been able to really claim their Blackfoot identity, increasing their knowledge of Blackfoot culture, meeting the challenges and moving forward in their academic lives. Having Blackfoot Elders in the college has been invaluable in helping students achieve this.

Weasel Fat acknowledges his role at Red Crow won’t last forever, but said he expects to continue working with the college for as long as he is able in an advisory role, supporting educators and students alike in understanding the role Traditional Blackfoot Knowledge can have in their post-secondary experience.

“We have really expanded our cultural programming, because we know that once our students reconnect, or gain a better understanding of Blackfoot culture, that really moves them forward,” he said. “They can take on any challenges.”