It was a very cold day and we were struggling along in our little red car through near blizzard conditions on our way to Thunder Bay. As northerners myself, my cousin Ron and my friend Mike were accustomed to dealing with slippery, remote roads like highway 101 west of Timmins. As we drove, huge transport trucks met us emerging like ghosts from the snowy whiteouts on the thin ribbon of ice that was 101. The little heater in the car squealed with the fan on high and it barely managed to keep the minus 30 degree temperature on the outside of the car. On either side of us there was only wilderness blanketed in many feet of fluffy snow and Thunder Bay seemed like a million kilometres away.

Happily, we had planned a brief stopover in Fox Lake First Nation near Chapleau to visit with the legendary Lindy Louttit and his daughter Wabimeguil (Betty Albert). We had been looking forward to visiting their art studio located in this tiny First Nation just off of highway 101. By the time we reached Fox Lake we were all very happy to exit the little car to take a break from the winter storm.

Lindy met us at the door and ushered us in with Cree greetings and a lot of laughs. We had a tour of the studio and we felt fortunate to see the artist at work in powerful images of oil on canvas. It felt as though we were visiting old friends and soon we were sitting, drinking tea and having a bite to eat. This was the old way, the Cree way and the northern way of having a visit. When we announced that it was time to get back on the road and head for our political event in Thunder Bay, Lindy protested as only Lindy could. There was no arguing with this man. He had much experience on stormy winter roads and from his days as a bush pilot so we decided to leave the raging winds and snow outside to be comforted and entertained by this amazing father/daughter duo.

We all laughed until our bellies hurt and we learned a few things about life, art and survival from the colourful stories Lindy told us. After a hot supper and evening of sharing stories we were provided with comfy beds and when we awoke in the morning they had breakfast waiting for us. It was as though the angels were watching over us. Sadly, Lindy passed away some years ago yet I think of him often.

Back on the road we had a much easier time on the salted and sanded highway 101 and the storm had passed. Under a pale blue northern sky and the hint of warmth from the shimmering sun we made our way through the white fantasy like world of winter, along the wilderness highway. 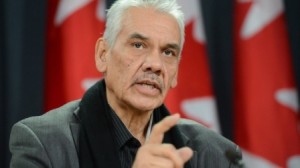 When we reached Thunder Bay we all felt a little intimidated at the thought of our attendance at a major First Nation political event. However, all that nervous anxiety fell to the wayside as we were greeted by a tall, robust and fit looking man who welcomed us in to share the room with many of the most powerful political leaders of the First Nations of northern Ontario. Stan Louttit, although a powerful and well respected leader asked us to join us at his table and in true Cree fashion managed a few witty jokes to make us feel more relaxed. My cousin Ron and I chatted with him in Cree and he provided us with all the information we needed to understand the meaning of this meeting we were attending. He made us all feel welcome. He helped us to understand that even though we were in the midst of very important leaders and attending a serious meeting it was also a gathering of mere mortals trying to do something good for their friends, neighbours and families. In the setting of a hotel conference room Stan made us feel at home.

I was very sad to learn that recently this giant of a man in terms of spirit, wisdom and kindness had passed away. He had been battling cancer for some time and has been taken from us far too early in his life. Stan was such a strong, positive and good voice for First Nations people. He was as much at home in a conference room in a big city filled with lots of important people as he was in his goose blind up the James Bay coast surrounded by family and friends on the goose hunt. He loved the land and he brought that connection and grounding to every meeting and negotiation he made with others to the table. He had respect for everyone he sat with and he brought his gift of humour and kindness to every situation he encountered. Don’t get me wrong, when he had to stand his ground his true spirit of the Cree warrior rose to the occasion.

Stan was born on his family’s traditional homelands at Lakitusaki, otherwise known as Lake River, north of Attawapiskat. This is remote wilderness area that I know well. Although he was a Fort Albany First Nation member, Stan moved to Moose Factory when he was a teenager and later was made an honourary member of the Moose Cree First Nation for his many contributions to the community. Stan was in his third consecutive term as Mushkegowuk Grand Chief when he was diagnosed with cancer. He also served a five-year term as Deputy Grand Chief of the Nishnawbe-Aski Nation. He was presented with a Ministerial Award and the Governor General’s Medal of Bravery in recognition of his efforts during the Winisk flood of 1986.

In 2011, the grand chief was awarded an Honourary Doctorate of Education by Nipissing University in recognition of his leadership and service to the Mushkegowuk Peoples and all First Nation citizens throughout Canada.

I know that his wife Sharon and his four daughters will always have him at their sides as they heal from such a huge loss. Myself and so many other First Nation people from all across Canada say a special Chi-Meegwetch for sharing your husband/father with us so that we could benefit from his strength, wisdom and courage to make life better for First Nations. I can imagine that Stan and Lindy might be somewhere far away near Lakitusaki like eagles soaring over the green pine, the rivers, the lakes and out onto the great James Bay. I thank them for taking the time to make this little Cree writer from James Bay welcome to their world of giants. I thank them for making me feel big in a world that has mostly made me feel very small and voiceless. Soar my friends way high in the sky and help us when you can.

1 Comment on "UNDER THE NORTHERN SKY: Homage To Mushkegowuk Grand Chief Stan Louttit"