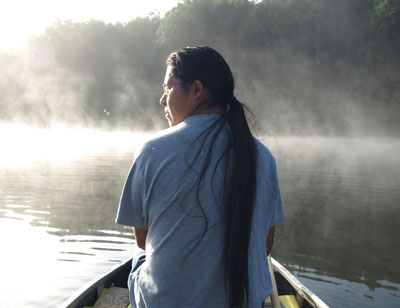 (underthenorthernsky.com) – Here we are entering another new year and leaving the old one in our dust. A lot of good things happened in 2018 but in my own experience I also have had to deal with family loved ones with health issues and also the passing of family members and friends. So, hello 2019 and I say that with the hope for all of us that we will have a wonderful year and that the world will become a more peaceful, loving and tolerant place.

If there was a wish I would be granted for the hope for this new year I think my choice would be for all of us just to be a little more kind to each other. Sometimes when we don’t feel good about ourselves we tend to search for others that we can look down on or focus our negative thoughts on. Too often I hear people talking badly about those of us in society who are different in terms of race, sexuality, culture or belief structure. Most of the time the people I hear saying negative things have big problems of their own that they can not or will not deal with and so they take it out on anyone else that is vulnerable.

Perhaps if you are not happy with your situation in life then it would be a good idea to work on that and improve yourself rather than hit out at anyone else. Hate for hate’s sake is a very sad and tragic thing. We need more understanding, tolerance and openness in our societies. To make this world a better place to live in we need to understand where all this hate comes from and do our best to heal it with kindness and getting to the root causes of intolerance.

Most of the time we tend to pick people and cultures to hate based on our fear or misunderstanding of who they are. Much of the time right wing or fascist parties and governments will use hate as a motivator to help them with their election to power and as a means to organize people. With so many of us being in situations where we are not happy it is very easy to get sucked into political strategies of hate and fear. These types of strategies most recently resulted in electing Donald Trump as the President of the United States. It is also the same type of strategies that were used by the rich and powerful to put fascist governments in place during the 1930s in Germany, Spain and Italy.  Once you jump on that hate bandwagon it becomes a very dangerous situation and suddenly countries find themselves sliding into dark realities where parts of society are demonized, oppressed and in some cases, as history has proven, eliminated or incarcerated.

It is up to us to be intelligent, strong and kind enough to recognize when political parties or governments are trying to use us with the good old, well proven hate magnet. We don’t have to join in with those who look down on people of a different culture or colour, those who are poor, immigrants from other countries and those of the LGBT communities.

I know what it feels like first hand to be treated badly by racists. I have experienced what that feels like and I can tell you that in the past it made me angry, sad and fearful. However, these days I understand the roots of where that hate comes from and it always has to do with people being sad about their own lives, having some terrible addictions that makes them feel hopeless or feeling that their life situations have not worked out as well as they would hoped.  It makes it easier to deal with hate when you understand where it comes from but at the same time it scares me that so many of us are willing to hate. That makes us easy prey for any political parties or governments that want to use that hate to put themselves in power. History has proven where that leads and we sure don’t want to keep repeating those dark periods of fascism.

So the next time somebody tries to get you to go along with hating anyone or any group based on race, colour, sexuality or beliefs take a deeper look and try to understand why that person is spouting hate. Do your best to educate them or enlighten them. Always speak up and stand up because the more we accept this behaviour and mentality, the worse our world becomes. The mere act of questioning someone’s negative attitude is a powerful one that shows everyone that intolerant behaviour is not acceptable. The more intolerant steps we allow society to take, the deeper we lead ourselves towards a darker future. We can live in a world that is peaceful, where we share the wealth and where we are kind to each other or we can live in fascist states where the wealthy get more wealthy while the poorer get poorer, where democracy and free thinking is oppressed and where minorities are discriminated against. It is all up to each one of us as an individual to make the New Year a better one.

Be the first to comment on "Under the Northern Sky: Happy New Year 2019"