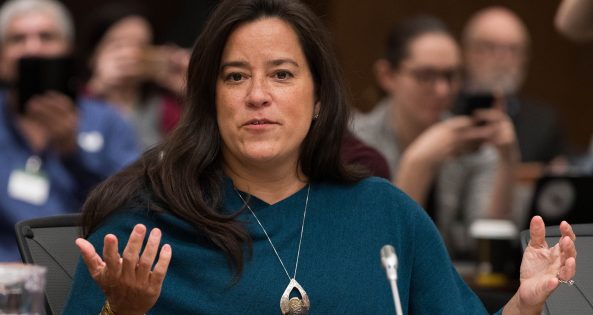 (Coast Salish Territory/Vancouver, B.C.) On February 27 former Attorney General Jody Wilson-Raybould displayed her characteristic unwavering commitment to justice and truth that has distinguished her as a strong, respected leader for Indigenous peoples. In scrupulous and succinct detail, Wilson-Raybould testified before the House of Commons Justice Committee.

“Jody Wilson-Raybould’s announcement that a campaign of “veiled threats” and “sustained pressure” was carried out by senior members of the Prime Minister’ Office (PMO) in order to force her hand in the SNC-Lavalin case is disturbing and indicative of a government that is severely compromised,” stated Grand Chief Stewart Phillip, President of the Union of BC Indian Chiefs (UBCIC). “The Trudeau government is upheld not by the pillars of justice and truth, but greed and partisanship – a government that time and time again favors corporations over the welfare and rights of Indigenous peoples. UBCIC unequivocally stands behind Jody Wilson-Raybould and denounces the inappropriate efforts of the Trudeau government to undermine her prosecutorial discretion and secure a strategic deferred prosecution agreement with SNC-Lavalin.”

Chief Bob Chamberlin, UBCIC Vice-President, stated, “Justin Trudeau’s willful ignorance belies how he is personally and directly linked to the charges of excessive political interference and Canadians will be hard-pressed to trust his claims that he and his staff have always acted ‘professionally and appropriately’ now that Jody Wilson-Raybould has provided her testimony. I cannot understate how proud I am of her integrity, determination, and dedication to justice. We respect her power and integrity.”

“UBCIC will continue to honor Jody Wilson-Raybould’s commitment to her role of the Attorney General as an independent and impartial administrator of justice who is not to be bought, bribed, or coerced,” stated Kukpi7 Judy Wilson, Secretary-Treasurer of UBCIC. “Highly concerning is the fact that the PMO still has not freed Wilson-Raybould from some of the constraints that bar her from speaking out about any communications or events that occurred post-cabinet shuffle, the time between her appointment as Minister of Veteran Affairs and her resignation from that post. We call upon Justin Trudeau and the PMO to issue a new Order in Council that would lift any and all constraints that would stifle Wilson-Raybould’s complete and truthful testimony of the SNC-Lavalin case.”