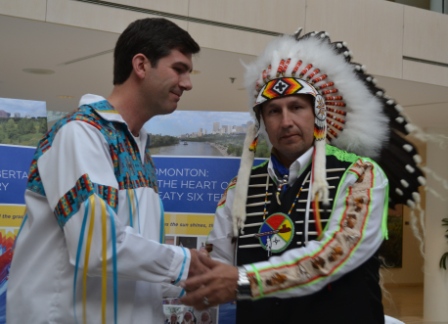 Chiefs representing the Confederacy of Treaty Six First Nations assembled at Edmonton City Hall to recognize the historic relationship forged between the Plains and Wood Cree people and the Crown at Fort Carlton in 1876.

To celebrate that historic relationship and recommit to a strong current and future relationship, on September 25, 2014, The City of Edmonton and The Confederacy of Treaty Six First Nations proclaimed Treaty Six Recognition Day. 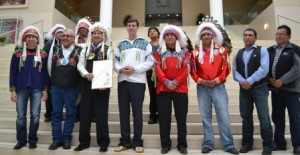 Two years ago, (then) Edmonton Mayor Stephen Mandel signed the historic Memorandum of Cooperation and Dialogue at the Alexis Nakota Sioux Nation Powwow. The memorandum was a commitment to recognize the original intent of Treaty Six as a reciprocal relationship and for the two to embark upon a renewed relationship. It is intended to be built upon honor, respect, sharing histories and cultures and acknowledging each party’s  unique contributions. Treaty Six Recognition Day is a direct result of this enhanced working relationship. 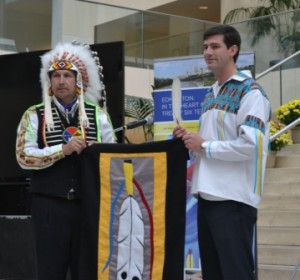 “First Nations have always thrived in this area long before the establishment of the Fort and the current municipality utilizing waterways as a major avenue for trade and commerce,” said Alexis Nakota Sioux Nation Chief Tony Alexis, on behalf of Grand Chief Craig Makinaw, Confederacy of Treaty Six First Nations.

“I feel it is always important to recognize the rich history that this area holds and it is equally important to appreciate the effort of those parties who seek to emphasize this history.”

A pipe ceremony was held before the event and following the ceremony the two parties exchanged gifts. Mayor Iveson was presented with an eagle feather and the chiefs kiddingly referred to him as the “Chief of Edmonton.”

Mayor Iveson noted the significant contributions made by Aboriginal people despite generations of attempts by the national government to strip them of their language, their culture and traditional practices.

“Indigenous people are here to stay,” he said. “They are resilient. They are our neighbors and they are our friends.”

He also referred to the fact that in 2005 Edmonton was the first Canadian municipality to have an Aboriginal declaration. In 2007 the city introduced the Edmonton Aboriginal Accord. Although progress continues on projects such as consultation and engagement around the Walter Dale Bridge and West Rossdale, he said there’s still a lot of work ahead.

The Treaty 6 Recognition Day event included a pipe ceremony as well as drumming and singing by the Alexis First Nation Singers.

During the event Mayor Iveson revealed that the City of Edmonton is pledging $20,000 toward a project involving the Confederacy of Treaty Six First Nations and the Fort Edmonton Management Company. In order to support how the local Treaty story is told, the project will endeavor to locate and honor the original Treaty Six adhesion site. It will also lead to new and improved First Nations’ programming at Fort Edmonton Park.

“This relationship is another important step towards the Park’s mission of connecting generations to Edmonton’s dynamic history,” said Doug Goss, Chair of the Fort Edmonton Management Company. “It is our wish to highlight the important role of First Nations in the development of the region and provide First Nations a place to tell their stories.”

“It is without a doubt that the recognition of Treaty Six will only grow in the following years and the work being completed today will lay the foundation for a dynamic city rich with First Nations history and involvement,” said Chief Alexis.

“It is difficult to read the news headlines today without seeing a negative portrayal of First Nations, however, events such as this are striving to educate both Treaty parties on the meaning of relationship and how best to implement the terms of the sacred arrangements. This process begins with recognition of where we came from and how we came to be here today, here on this momentous occasion and to learn from our mistakes and strive to be better than we have been in the past.”

“Leaders like Mayor Don Iveson and the current council have dedicated themselves to reconciliation with First Nations, and this begins with recognizing and understanding the rich history that this territory holds. I commend city staff and those at the Confederacy for their work thus far — the future holds a wealth of promise.”

The chiefs of the Confederacy presented the City with an official Confederacy of Treaty Six First Nations Flag which will fly outside City Hall for one week, while another will permanently hang in the City Room beside the Urban Aboriginal display.