Attending the Truth and Reconciliation Commission’s final, national event in Edmonton was a remarkable experience to say the least. I attended for work purposes and also as an inter-generational survivor as my Kohkum attended residential school. Unfortunately, I didn’t have the opportunity to speak with her about her experience before she passed away just over six years ago.

In fact I hardly knew a thing about residential school until a few years ago, which, sadly falls right in line with the 50 per cent of Canadians who have no idea that they even existed. 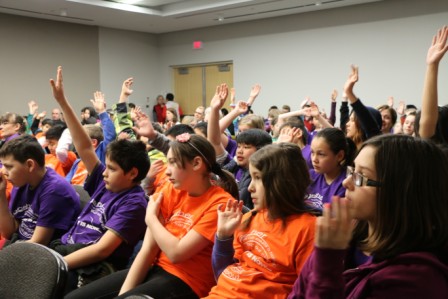 Children listen attentively to an address by Commissioner Wilton Littlechild on Education Day at the TRC event in Edmonton. Story by Brandi Morin; Photos by Terry Lusty

It was an amazing sight to behold – thousands of Indigenous Canadians filing into the Shaw Conference Centre during the four-day event. By then I thought I knew about residential schools because I had researched and watched documentaries on the matter. But nothing could’ve prepared me for the multitude of horrors, sorrow and shame from hearing survivor stories first-hand.

Like Marjoric Wright who did not attend residential school, but may as well have by the way she was ridiculed and beaten in public school because of her Aboriginal decent. Her older sister, who is no longer with us, attended residential school and its effects deeply penetrated through the generations and showed up in the form of addictions and other dysfunction. Wright’s sister delivered babies from girls who had been impregnated by priests and sometimes the boys that would sneak out – they even delivered nuns’ babies. Wright said the babies either died or were killed and their cousin was the one in charge of getting rid of the bodies.

Another survivor, Theodore Fontaine of Winnipeg, wrote a book about his experience. He bravely shared his story during the commissioner’s panel in front of a crowd of over two thousand.

He said he entered residential school in 1948 and spent more than 12 years there.

“This was the biggest mistake that Canada ever made. Whatever you’ve heard is incredibly true and is just a fraction of what happened,” he said.

Fontaine said he endured mental/spiritual and sexual abuse having being raped repeatedly from a young age.

He went through several phases of trauma, confrontation and healing in his life. The circle seemed to continually go around and now, in his old age, the effects never appear to fully subside.

Just one month ago he began reliving the abuses. A terrifying nightmare left him lying paralyzed in bed.

“I always think I’m on my way to reconciliation and a better way of life, but it stays with you.”

He went on to share how he reached out to one of the priests who molested him in an attempt to bring closure and that priest claimed he didn’t remember him.

Fontaine said he apologized to his abuser.

“I said ‘I’m sorry; because for the last 60 years I’ve hated you and wanted to kill you.’ Can you imagine saying that to another human being? That came from me, but it wasn’t me speaking. It was the 7, 8 and nine year old boy getting out whatever was still bothering him after 60 some years.”

After that the abuser continued to deny that anything had happened and Fontaine resolved to confront him again at a later date.

Within a month he had another face to face meeting with the priest. At the end, as they were wrapping up the priest said, “By the way Theodore, thank you very much for not mentioning my name in your book.”

This left Fontaine with a sickening sense of despondency for closure with his abuser. 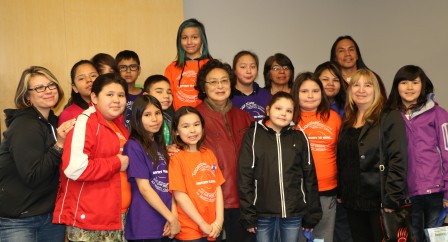 Students pose for a picture with author, Margaret Pokiak-Fenton after listening to her read from her book “Fatty Legs” during Education Day at the TRC event in Edmonton. Photo by Terry Lusty

Multitudes of school aged children were trucked in to take in the TRC as it coincided with Education Day. It is an encouraging step in the reconciliation process to give exposure and education to a new generation of society. Allowing others an authentic opportunity to understand events such as this tragic era in Canada’s history makes it easier for us to relate and form new relationships across the divide of preceding ignorance.

Many non-Aboriginal attendees could be seen mingling    among the crowds with looks of distress over comprehending  the reality of what their beloved country brutally mandated  over its Indigenous population.

One woman took an Aboriginal history course beforehand to prepare for the event. Anne Arsenean said she had no idea how much harm had been done. She said, “Even though I’ve worked with inner city people in groups, I have always had a sense that I did not really understand them fully. Now, my eyes and my heart have been opened.”

Arsenean works for a large church in Sherwood Park and the church is teaching staff and its congregation about residential schools.
“Most people have no knowledge of this generational hurt and pain. We are working towards breaking stereotypes and developing relationships and respect for our dear brothers and sisters. This is a Canadian issue and requires the country to come together. Our history and voice needs to be shared.”

Attendees also displayed unimpeded compassion and a willingness to participate in the reconciliation process.

Edmonton Mayor Don Iveson was inducted as a honourary witness and said that he will wear his commemorative pin for a full year in order to give an opportunity for conversations around healing and reconciliation to take place. He also declared the year ahead for the City of Edmonton, (as did Calgary), to be one of healing and reconciliation. Iveson along with Premier Dave Hancock participated in a walk to the Legislature along with nearly 5,000 people at the conclusion of the TRC event.

This is not the end, however, merely the beginning. The TRC helped to forge a pathway for healing and reconciliation to continue and break ground into the core of this movement for Canadian society. It’s a moment for the First People and settlers to come together, discern and work out our differences which will ultimately benefit us all. I hope we’re on the road to living peacefully, side-by-side flourishing together as was the original plan on which this great country was founded.

Be the first to comment on "TRC event drew thousands"