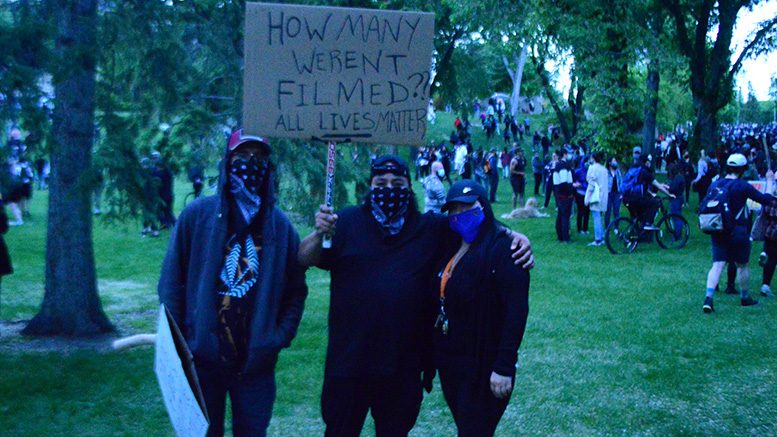 TJ, Nathan and Vanessa speak out against systemic racism at an anti-racism rally in Edmonton on June 5.

(ANNews) – Things are getting scary here in Canada. The political upheaval that the United States is going through is slowly creeping up into our borders. There have already been countless protests and plenty of “DefundthePolice” hashtags here in the Great White North. However, this has not stopped the RCMP from assaulting and murdering Indigenous people within Canadian borders.

According to an article by the Globe and Mail, six Indigenous people have been killed by police in Canada since April in shootings in Winnipeg, New Brunswick and Nunavut.

In New Brunswick alone there have been two murders: Chantel Moore was shot five times (where the bullets hit her has not been released) during a wellness check by an unknown police officer; Rodney Levi was shot and killed by police a few days later.

In a CBC article, it states: The RCMP’s commanding officer in Alberta denies there is systemic racism in policing in Canada, amid allegations his members used excessive force against an Indigenous chief during an arrest.

Rodney Diverlus, co-founder of Black Lives Matter Toronto, said “I think [Commissioner Lucki’s] answer was absolute bullshit. I’m just going to be really frank about it. To suggest that there are five different definitions of systemic racism and that you’re confused is not really the point. I think the real point is that our public officials are actually learning about racism that their own institutions have been inflicting on our communities, from the media in 2020.

I don’t know why we have officials that are struggling to define racism in 2020. I have done presentations to elementary school with more nuanced analysis of racism. And I think it’s unacceptable and frankly bullshit for anyone in any leadership position anywhere in the country to stand there and not show an ounce of understanding of these basic issues. Institutional systemic racism really was coined 53 years ago and has been felt by Indigenous, Black and racialized people since day one of this country’s creation.”

Eleanore Sunchild, the Boushie family’s lawyer, said Zablocki’s latest comments indicate he did not learn from the events following Colten Boushie’s murder at the hands of Farmer, Gerald Stanley, who was acquitted for the murder of the 22-year-old.

Sunchild said she wasn’t shocked to hear the comments, saying similar arguments have been made for hundreds of years. “We’ve been hearing this … since colonization, since the RCMP came onto our lands to take the children away,” Sunchild said. “It’s been the same old problem.”

“Systemic racism is an issue right across the country, in all of our institutions, including in all of our police forces, including in the RCMP,” Mr. Trudeau said. “Recognizing that is difficult and we need to make sure that we are moving forward in really meaningful ways and that is also going to be difficult.”

“It was never my intention to minimize anyone’s experience or to hurt racialized or Indigenous people through my comments,” said Alberta’s top RCMP officer when asked by CBC News about calls for his resignation by the Criminal Trial Lawyers Association of Alberta (CTLA).

The Edmonton Journal reported: The province’s top RCMP officer is walking back comments he made earlier this week denying systemic racism exists within the service, the same day a group representing over 200 Alberta defence lawyers called for his resignation.

Brenda Lucki said, “I did acknowledge that we, like others, have racism in our organization, but I did not say definitively that systemic racism exists in the RCMP, I should have. As many have said, I do know that systemic racism is part of every institution, the RCMP included. Throughout our history and today, we have not always treated racialized and Indigenous people fairly.”

In a Global News article, it’s stated: Lucki should resign or be removed to ensure the national police force can properly serve Indigenous communities, a Saskatchewan senator said.

Seems both of their tunes changed when the prospect of their resignations were brought up.

The True Cost of Replacing the RCMP in Alberta