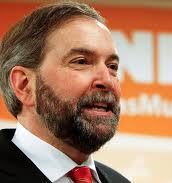 OTTAWA – The NDP leader vows that his government would launch a national inquiry into the cases of the 1,200 Indigenous women that have been killed or gone missing over the last 30 years in its first 100 days in power.

“Enough is enough. Stephen Harper has made it clear that he has no intention of doing the right thing. But I can promise that, if the NDP forms government in 2015, we will launch an investigation into murdered and missing Indigenous women,” said the leader of the Official Opposition, Tom Mulcair on August 27, 2014.

A recent RCMP report revealed that approximately 1,200 Indigenous women have been murdered or gone missing over the last 30 years. Young Indigenous women are far more likely to be murdered than other young women.

“Police investigations just aren’t enough,” added Mr. Mulcair. “It is inconceivable that we, as a country, allowed this situation to continue. We urgently need to acknowledge the systemic aspect of this crisis instead of ignoring or dismissing it. All Canadians deserve to live in safety.”

The Liberal Party of Canada has long promised support for a National Public Inquiry while the government of Canada continues to reject calls for the inquiry.

Be the first to comment on "Tom Mulcair: NDP would launch national inquiry in its first 100 days in power"