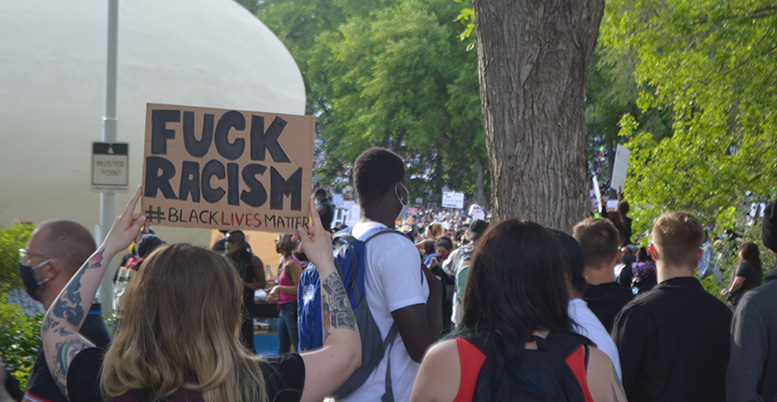 Thousands of Edmontonians took to the streets on June 5, 2020 to protest racism at home and around the world in solidarity with Black Lives Matter.

(ANNews) – On June 5, 2020 Edmonton, Alberta was the host of a Black Lives Matter protest in which upwards of 15,000 people were in attendance.

The protest took place behind the legislature grounds and along with countless other protests happening worldwide in the largest human rights protest in history, it was the result of a pressure cooker of police sadism and systemic racism, which exploded on May 25, 2020 when George Floyd was murdered by police in Minnesota for an alleged $20 counterfeit bill. 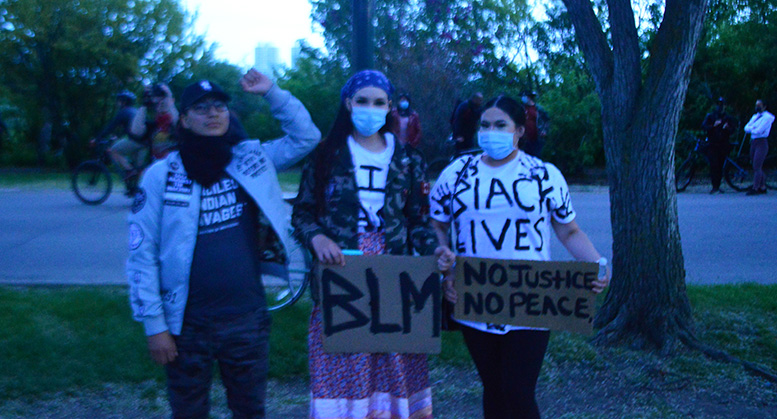 Caleb, Olivia and Mercedes speak out against police harassment at a Black Lives Matter rally in Edmonton.

Olivia: “A few times I’ve gotten pulled over when I was walking on the street. A cop would pull me over and ask me questions. And I don’t know if it was because I was Native, but I do know that I wasn’t being suspicious. It happens.”

Mercedes: “Being a Native in Canada is tough. It comes with a lot of discrimination based on how we look, how we dress, how we present ourselves. I stand with the Black Lives Matter because they’re going through what we’re going through. Enough is enough.”

The main part of the Edmonton “equality” protest ended around 8pm, which saw a large chunk of the crowd disperse back to their homes. However, a few hundred protestors took to the streets and continued to protest until midnight approximately.

During this time, Global News reported that one arrest was made in regards to a smashed police windshield. The perpetrator was charged with mischief, but was released. In the same incident, a police officer was also struck in the face by an unknown woman. She was not charged, nor did any injuries occur.

The Edmonton Police Service (EPS) responded to the protest by taking a knee while a police helicopter circled the protesters and the downtown area until 5am. The EPS also allegedly had vans equipped with multiple police officers a few blocks down from the protest grounds in case it turned violent. 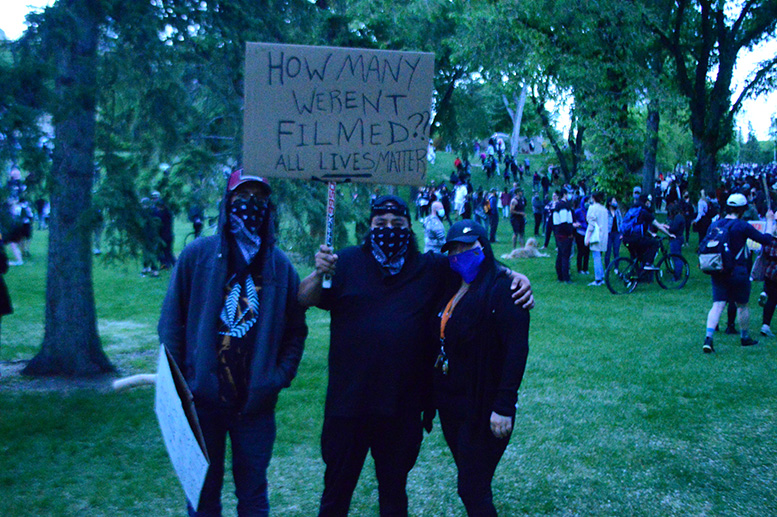 TJ, Nathan and Vanessa speak out against systemic racism.

Nathan: “I get pulled over all the time just because I’m Brown. They’re always checking if I’m smoking dope or if I’m drunk. They follow us all the time, even when I’m going to buy make-up for my wife they think I’m going to steal something. I think that’s racism.

Despite the EPS taking a knee and other News Media reports, there are citizen reports making the rounds on social media which argue for different events. For example, in a Twitter thread made by @ashyslashyxo, they claimed that the EPS allegedly pulled out AR-15s and tear gas canisters during the peaceful protest.

The anti-racism protests against brutal and sadistic abuses of power came a day after the murder of Chantel Moore, an Indigenous woman living in New Brunswick; a month after the man who murdered Jake Sansom and Maurice Cardinal pleaded “not guilty” of second degree murder; four months after the senseless beating of Athabascan Chipewyan First Nation Chief, Allan Adam; more than six months after the release of the Globe and Mail report, in which they revealed that more than one third of people shot to death over a decade by RCMP officers were Indigenous. 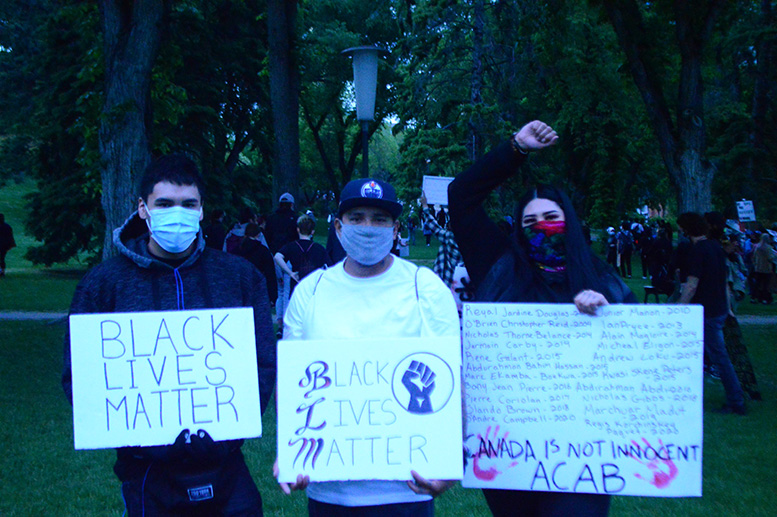 Eagle Whistle Woman, Albert and an unknown man protest the senseless murder of George Floyd at the hands of a Minnesota police officer.

Eagle Whistle Woman: “There’ve been plenty of times when I’ve seen and experienced racial profiling. I’ve been followed, shopper racism, it’s just common. If you come from the reservation to the city, just to spend a day, I guarantee you will most likely experience one form of racism or another. It’s just an everyday thing here.”

Albert: “I was walking across the street, jay-walking, on Whyte Ave and I was tackled by police officer. I wasn’t the only one walking, I was also walking with many others [of multiple ethnicities], but they singled me out because of my braid. This was about two years ago.”

For these reasons the hashtag, DefundthePolice, has blown up in the past few days. An online petition calling to defund the EPS has gained over 10,000 signatures.

Edmonton Mayor Don Iveson, stated in a Global News article, “on several occasions in budgets over previous years, we have chosen to fund those community safety partnerships over increasing the policing budget because we believe there is a strong return to working with community that way.”

The Edmonton Police Service is expected to receive an additional $75 million dollars over the next few years. This money is being added on top of their 300 million dollar budget.

In the same Global News article, president of the Edmonton Police Association, Sgt. Michael Elliot said, “I know the stress is high but I think at this moment to defund (the police) would be detrimental not only to policing in general but to continue with our relationship with the community.”

After engaging in some discourse analysis, it would be interesting to know what Sgt. Elliot meant when he said “to continue our relationship with the community.”

It could be interpreted as a vague threat or a simple plea to keep a job during an economic depression caused by COVID-19. Either way, there is no question that if the Edmonton Police Service (and Police across Alberta) were to be defunded: the rich, white politicians destroying the environment and stepping on not only Indigenous rights, but basic human rights as well, would have no one to enforce their laws. 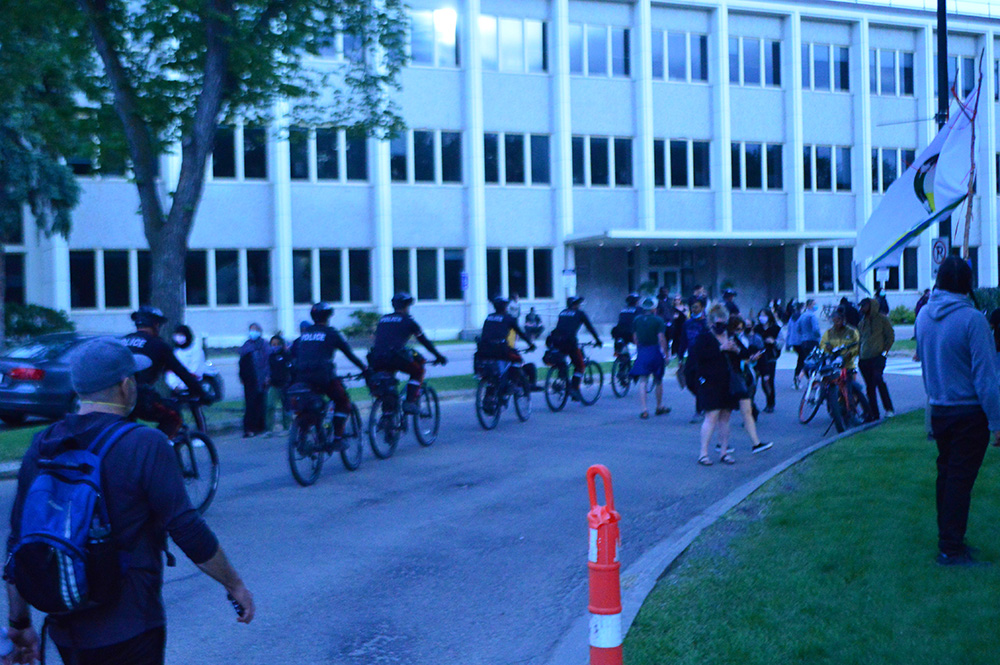