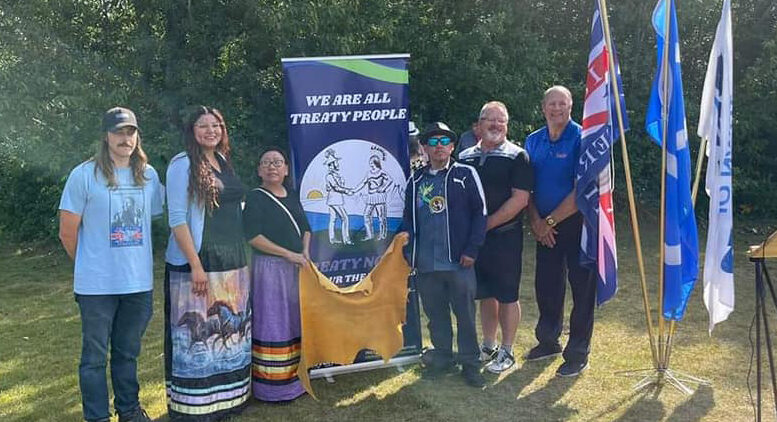 (ANNews) – The Second annual Treaty Six Day in the Town of Devon, Alberta was held on Saturday, August 27. This was a day of gathering not only as a community but as Treaty People. This year’s gathering was the result of a partnership with kisipatinahk, nipisikopahk, akamihk, neyaskweyahk, and maskêkosihk, and the Town of Devon was honoured to work with each Nation to create an inclusive, engaging and experiential gathering for the region.

The event was a success, with over 250 people attending throughout the afternoon, with the opportunity for everyone to learn about Treaty, history and culture.

“August 23 of each year is the proclaimed Treaty Six Day in Devon, a day intended to celebrate the Treaty Relationship between Devon and Treaty Six First Nations, to continue educating the community and bringing people together in a good way. This year’s gathering was a two-part event, with the Pipe Ceremony and meal held on August 23, and the community celebration on August 27,” said Mitch Wincentaylo, Indigenous Engagement Coordinator for the Town of Devon and Edmonton Metropolitan Region Board.

“This was a day of recognition and education regarding Treaty – a way for everyone present to gain a better understanding about the true history of the Nations [and region], and to come together to celebrate this covenant.”

Although the rain made for a smaller attendance than planned, those that attended had the opportunity to learn directly from Elders and Nation members, to learn about Treaty Six, Nehiyaw, and Métis culture, as well as play hand games, attend Treaty Talks sessions, and learn how to brain tan deer hides. There was also an artisan market, with over 30 vendors and Indigenous food trucks from Louis Bull and Samson Nations.

“This gathering is so important to Devon, as it’s also a way for non-Indigenous people to learn about their responsibilities as Treaty People,” said Wincentaylo.

There are so many people who don’t know about history, or about Treaty, and this day is a good start for those that want to learn more and become involved, he explained.

“It’s also a day to celebrate one another, to come together and break down those barriers that still persist today. We can only learn from one another – from the Nations of whose territories we live within. It’s time we start acknowledging this and educating ourselves; that’s the only way change will happen, ” added Wincentaylo.

“Devon also would like to say a special thank you to Elmer Rattlesnake for the emceeing, and to all of the Elders for attending and supporting the gathering and sharing their knowledge with attendees and to the vendors who came out for the day,” said Wincentaylo.

“Settlers are trying to find their role in the Treaty relationship and their part in reconciliation.”

Both Swampy and Wincentaylo represent a new generation of Albertan leaders who, in their roles, are aiming to build reconciliation between the settler populations and Indigenous populations. And as we grow as a country and as a nation, it’s important to highlight events such as Devon Treaty Day because the idea of a settler town hosting a treaty day was unthinkable only 30 years ago. It’s an example of how far we have progressed together.

The Town of Devon will be creating a planning committee for future gatherings. If you would like to be a part of this volunteer committee, please get in touch with Mitch Wincentaylo or Katherine Swampy

The Treaty contained a unique clause stipulating that a “medicine chest” be kept for the benefit of each band.