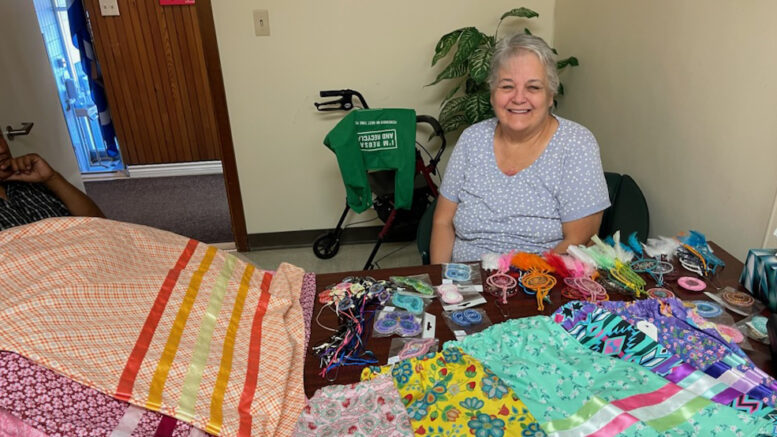 Jamie Lynn Stewart recently made a generous donation of cultural items to Metis Child and Family Services Society to be distributed to Metis children in care.

(ANNews) – A few weeks ago, local Indigenous designer Jamie Stewart dropped by the Metis Child and Family Services Society (MCFSS) in Edmonton with a donation of ribbon skirts, dream catchers, earrings, moss bags and more for children in care, many of whom haven’t had the opportunity to embrace their culture.

Stewart told ANNews she decided to make her donation, which is part of a project dubbed “A Bridge Back Home,” because as a descendant of residential school survivors, and the spouse of one, she understands what it’s like to be deprived of your culture.

Children being taken from their parents and placed into care is a direct consequence of this trauma, she added.

“People are dealing with addictions and cycles of abuse and family violence, so we’ve got a whole bunch of kids in care. These kids are disconnected from their communities, their families, their culture and their teachings,” said Stewart.

“All I wanted to do was send them a message that I’m thinking about them, that we’re here and we want them back home.”

She said the next phase of her project is to make Christmas stockings for kids in care.

Stewart said she doesn’t think decolonization is  “going to happen,” but that Indigenous people can still persevere and take care of their own, as they have historically.

“Doing it this way, I don’t have to ask for government funding, approval or permission. I’m doing this because of who I am and who we are as a people,” she said of her decision to donate.

In her business practice at Jamie Lynn Designs, Stewart said she always makes sure that her goods are affordable for your average Indigenous person – but this is different.

“I’ve been gifted along the way. I’ve got an excess of fabric and I could probably turn it into a profit, but that’s not what it’s about. It’s about reaching these kids in light of everything that’s happened,” she said, adding that she wants to ensure a “seed is planted” in these kids’ minds about their culture.

Florence Gaucher, who is in charge of foster care and kinship at MCFSS, told ANNews they “very, very seldom” receive donations.

“I’ve been working here for 20 years and as far as donations go, the only one I recall receiving is a lump sum from the Metis Nation of Alberta,” Gaucher recalled. “We’ve never had any other organization donate dollars towards us.”

Gaucher added she’s known Jamie Stewart for a while, ever since she was a vendor at the St. Albert Metis Festival, which Gaucher organized.

She said she was “amazed” by Stewart’s generosity, which will help children in care get in touch with their Metis heritage.

“They need to have a little bit of their culture with them, because kids coming into care are [generally] placed into homes that are not Native homes — they’re not Metis homes — and it’s not any fault of theirs or the system. There’s just not enough Metis families that want to foster,” Gaucher said.

“That’s really the bottom line. We’d definitely place them into a Metis home if we could.”

She estimates Stewart’s donations were worth about $2,500. “There’s a lot of work she put into it,” Gaucher said. “That’s what she does for a living.”

MCFSS has seven support workers, each responsible for 10 homes, with each having anywhere from two to four children in their care. Stewart’s donations were given to each support worker who dispersed them among their homes.

“We’ve already given them to some of our young teenage girls and they’re totally excited about it,” said Gaucher.

Like everyone else, it’s important for Metis people to embrace their culture and know where they come from, she said.

“When you grow up and you don’t know who you are, you don’t know what your culture is, you don’t know your history and you’re cut loose into foster care at 17 or 18 years old, who do you go to? You need to belong to a community. That’s the important part of it,” she said. “It’s the sense of belonging somewhere.”