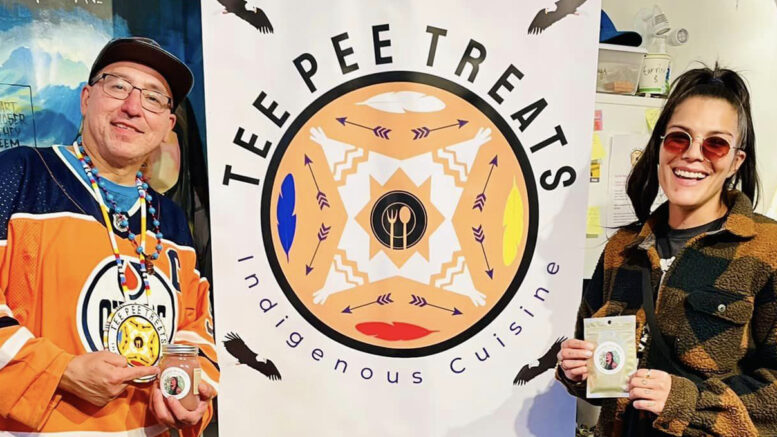 Tee Pee Treats is located at the CO*LAB – Community {Arts} Laboratory in the Quarters on the East edge of Downtown Edmonton (9641 102 A Ave). They are open Tuesday to Saturday from 11 am to 7 pm

(ANNews) – We all experience journeys and stories while we are on Mother Earth. Originally from Whitefish Lake First Nation, Curtis Cardinal is the owner and founder of Tee Pee Treats Indigenous Cuisine located in Edmonton.

According to Cardinal, Tee Pee Treats has been over 11 years in the making. In 2010 he was selling bannock out of his backpack at powwows to make extra money during the summer. But, the fact that he didn’t have the necessary Alberta food and safety qualifications caused his business to get shut down.

“The bannock police chased me out of there,” Cardinal said, smiling. He spoke more about why he started Tee Pee Treats. “I started my own business because I love to cook. And I learned how to cook from my mom and my aunties.”

But he said what threw him off his cooking journey were his struggles with drugs and alcohol. Cardinal had also previously struggled with being homeless. He told ANNews that he went to rehab in 2012 and soon after, a longtime friend of his, Ian Gladue, asked him to help him with his business Native Delights.

Cardinal explained that Native Delights started out as a vending cart and Gladue mentored him on how to run it. When Native Delights got a food truck, Cardinal would take it to different events across Alberta. The learning experience that he gained from Native Delights was crucial to him being able to run his own business and in 2015 Cardinal opened his own catering business.

“But, it wasn’t actually legit because I didn’t have my business license,” Cardinal said, smiling. “So I was just doing it out of my house, out of my garage.”

Eventually Cardinal got his business license in 2018 and he said that the process of opening and running Tee Pee Treats has been a lot of hard work. He has put numerous hours into the business and has had many late nights and many days away from his family —- all for the purpose of being able to feed good food to people.

Today, Tee Pee Treats has a dine-in and takeout location at 9641 102A Avenue in downtown Edmonton, where the Community Arts Laboratory (CO*LAB) is located. Tee Pee Treats also does catering at another kitchen located in Edmonton.

“I’ve always had a vision in my mind where I wanted to have these restaurants built as teepees all across everywhere – all across turtle island.”

Cardinal said what he loves most about working at Tee Pee Treats is making the food, meeting new people everyday and learning new things about the food industry. Throughout the interview Cardinal exuded a genuine love for his job and also a love for people. One way he demonstrates that love is by his initiatives to give back to the community.

One of those initiatives was Tee Pee Treats’ Giving Back to the Streets 5 event. Sponsored by Astum Auto Loans, the event took place on September 25 at its CO*LAB location. Cardinal said he’d been planning the event for two years but, due to the COVID-19 pandemic it wasn’t possible until this year. The event had live performances, drummers and free food and it included various donations such as winter clothing for the community.

“Since we opened in July this year at the new location we must have fed at least 300 people,” Cardinal said. “Hungry people hear about the program and come here and get something to eat.”

In the future once Tee Pee Treats grows bigger Cardinal plans on giving back to the community in bigger ways. One way he wants to give back is by starting an Indigenous trust fund. The idea would be that Indigenous people who are financially in need could access money from the trust fund through Tee Pee Treats. Cardinal explained that they could use the money for things like paying for groceries or addiction programs.

When asked if he had a message he would like to share with those who may be struggling or aspiring to open their own business, Cardinal’s message was: “Just do what you love to do, work hard and don’t give up.”

He explained that he wouldn’t be working at Tee Pee Treats if he didn’t love it. But, running the business is a lot of hard work and he’s faced lots of difficulties. However, despite everything he has been through he hasn’t ever given up on Tee Pee Treats. The knowledge that others, including his children, are watching him motivates him to keep on persevering.

“A lot of people inspire me, but I want to inspire others too,” Cardinal said. “And I hope that’s what I’m accomplishing with Tee Pee Treats: inspiring others.”

More information on Tee Pee Treats can be found at its website: www.teepeetreats.com

Be the first to comment on "The story of Tee Pee Treats Indigenous Cuisine: a journey of perseverance and love"