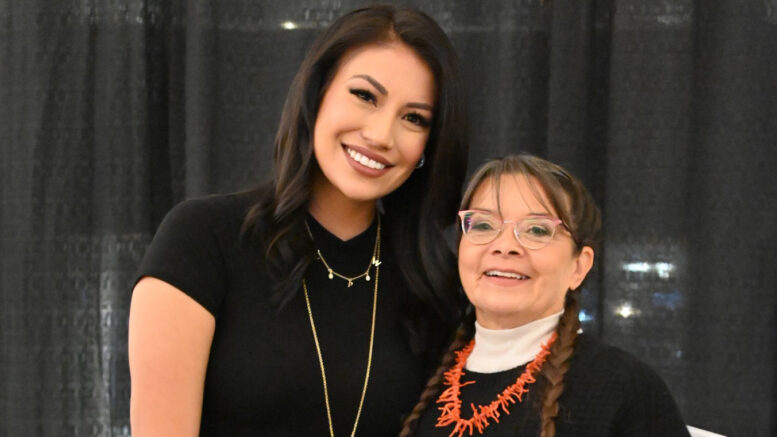 Tanya Ward-Schur at the 3rd annual Walk a Mile in A Ribbon Skirt with Ashley Callingbull at West Edmonton Mall. Photo supplied.

(ANNews) – Tanya Ward-Schur describes herself as a helper in the Red Deer community. She was educated at Royal Roads University and was recognized by the City of Red Deer for her community work.

Ward-Schur is identified as Blackfoot, Metis with relatives from northern Alberta and Browning, Montana, USA. She is a prominent advocate from the Red Deer area who worked for the Red Deer Native Friendship Society and is currently at the Urban Aboriginal Voice Society in Red Deer. She recently helped organize North America’s first Wellbriety Conference in Red Deer, Alberta. 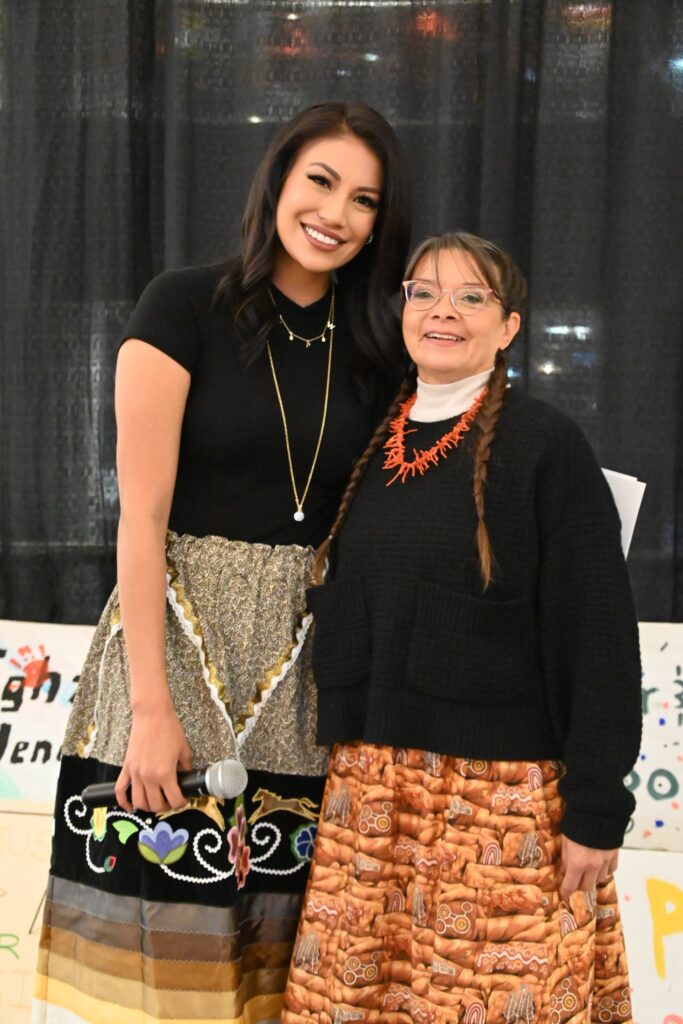 Tany Ward-Schur with Ashley Callingbull at the third annual Walk a Mile in a Ribbon Skirt event at West Edmonton Mall. Photo supplied.

Tanya explained that right now, she is a human person who wishes she could be a Bear. “I didn’t grow up culturally,” she added. “I struggled all through my life trying to recognize myself as a person and human.”

Ward-Schur says we hear about epigenetics, but as Indigenous people, we talk about “blood memory.”

“We carry the blood memory of our ancestors in our DNA,” she explained.

According to Ward-Schur, as Indigenous people, we are constantly accessing that memory from the past into the future. Drawing from the Indigenous four directions, she said, “I realize to be a balanced person, we need to work on being emotionally, mentally, spiritually, and physically balanced.”

“Our spirit exists long before it comes into this world,” so we need to do the work to achieve balance, “and engage in the struggle of getting well.”

“We are given forms throughout life to live,” she added. “That’s always been my struggle because I was born into a family with addictions.”

Doing the work means “letting go of what we need to let go of, that hurt and pain which led us to addiction, it could be substance, overeating, too much shopping, or whatever it may be that led to an unbalanced life.”

Doing the work on ourselves “is an attempt to try and reconcile all the pain of the generations that have come before us,” said Ward-Schur.

“So, the ones that come after us don’t have to go through the suffering we had to endure.”

The goal is to create healthy Indigenous families that can thrive. “It’s more than just breaking the cycle,” she said.

“We are starting a new cycle…I am starting to meet little kids growing up in intact families, with parents that have not suffered substance abuse issues.”

For her, it’s a positive signal that Indigenous people are healing.

Ward-Schur said healthy Indigenous families want to focus on “what lays ahead for their kids.”

Tanya’s blood memory carries a time when her female ancestors migrated from the eastern areas of Canada.

She said “[I was] born from a family that was also suffering from intergenerational trauma and having grandmas, grandmothers, and ancient years back – we came from the east by the fur trade, trade, and traffic.”

Ward-Schur explained, “My ancestors were in the back of canoes, heading down rivers, and coming west. Those women helped European fur traders and the first settlers to live on the land and survive on the land.

“But in that move, in that becoming, it left a lot of confusion about who we were as human beings.”

Growing up in a family of brothers, she struggled to find her place. “I wanted to be part of what was going on in my family – I had a lot of opportunities to play sports, sing songs, and be active.”

Ward-Schur said her relatives profoundly impacted her life as a youth but living in a small community and town with no other Native people was challenging and a struggle.

She explained, “We knew we were Native, but no one talked about it.”

It wasn’t until later in her life that she began to reintegrate into the Indigenous experience.

“It wasn’t until my grandmother was in her transition that anyone even told me what it meant to be a Native person. Since then, it’s been a long journey of trying to understand myself as a Native person,” said Ward-Schur.

She is now a proud Native Woman; she carries her drums, sings Indigenous songs, and understands the Indigenous experience.

“The drum is my life; it came to me, protected me, kept me safe. In this world, I carry drums and songs from many places.”

Her journey finding balance has been a struggle, she added.

“I was given the Indigenous name, Morning Star Eagle Singer.”

She said it took her a long time to grow into her Indigenous name and own her gift of song.

It’s all about being of service in an excellent way to Indigenous communities. “It is through the beauty and beautiful voices that we make medicine and good medicine for one another.”

“I heard that music goes where words cannot go – and it has been very true in my own life,” said Ward-Schur.

On October 22, 2022, she inspired guests when she spoke and sang a beautiful song at the third annual Walk a Mile in a Ribbon Skirt at West Edmonton Mall. The event was initiated by Edmonton’s Hate to Hope Initiative after the Rabbit family of Montana Cree Nation faced discrimination in an Edmonton restaurant. It was hosted by Ashley Callingbull, an advocate and long-time supporter of Hate to Hope Initiatives.

Ward-Schur concluded her interview by discussing the Medicine Wheel and living the balanced life of the four directions.

She said that there are times that she wants to be a Bear to have a long memory.

“The buffalo is big and extraverted,” she noted, “and the balance is that I can also be small like a mouse, and it’s okay to be invisible and support from the back.”

If we think about the medicine wheel, the balance, and the centre, it’s the ability to move in any direction, as they say, to be the right person at the right time for the right reason.

The idea of hope for healthy Cree families is to grow our families in love and acceptance – with unconditional love.