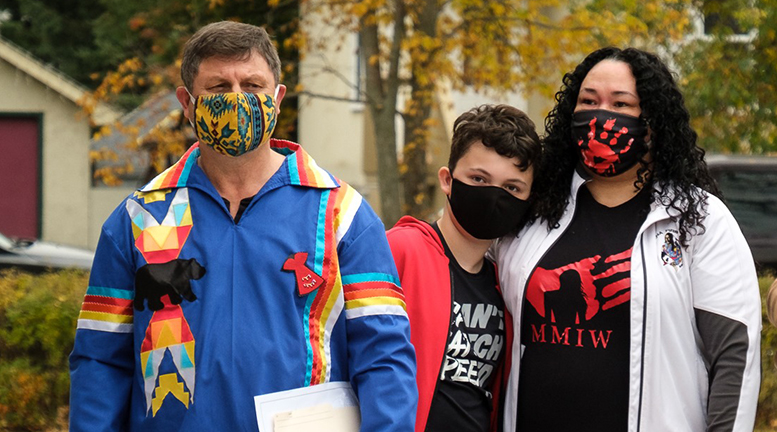 Suzanne Life-Yeomans and Minister of Indigenous Relations Rick Wilson at the walk to remember and raise awareness of missing and murdered Indigenous women and children. Photo by Darlene Hildebrandt.

(ANNews) – Suzanne Life-Yeomans is a member of the Liidlii Kue First Nation but was raised in Cowichan Tribes Territory on Vancouver Island, BC.  She is a committee member for the Alberta Joint Working Group for Missing and Murdered Indigenous Women, Girls and 2S+ (AJWG), and a member of the Alberta First Nation Women’s Council on Economic Security.

In an interview with Alberta Native News, Life-Yeomans discusses her life, career, education, and her family’s personal connection to MMIWG. She calls on support for families of MMIWG2S+ and she said that the AJWG heard that “loud and clear.”

When talking about her role as a committee member for the AJWG Life-Yeomans explained, “It was an extensive process of examining what is happening currently and what are suggested improvements.

“We gathered the input of family members and advocates through engagements conducted by IAAW and Awo Taan Healing Lodge, reaching out to groups for absent perspectives and an online survey.”

She said by addressing the calls for justice, society as a whole can participate in creating an Alberta where Indigenous women, girls, and 2SLGBTQQIA+ people are valued, respected, and are safe to lead lives filled with hope and promise.

She added, “Over 46 full-day meetings or 337 hours and 100 hours + of preparation time was given by members for this process. The final report contains over 100 recommended actions in several areas. The report was presented to the three Ministers on December 23 and currently, it is in review.”

She’s achieved a master’s degree in Business, a bachelor’s degree in Law, Indigenous Corporate Relations Diploma, and an Indigenous Governance Diploma. Her educational endeavours include many certifications – most recently a Technician Level Certification for Cando’s Certified Aboriginal Economic Developer.

Life-Yeomans explained that COVID-19 health and safety measures impacted in-person meetings for AJWG, however, the meaningful work continued through the pandemic. This resulted in a nine-month extension for AJWG, which was granted by the Government of Alberta to thoroughly examine the issues and come up with recommendations.

“Our goal is to collaboratively build an Alberta where Indigenous women, girls, and 2SLGBTQQIA+ peoples are valued, respected, and are safe,” she added. “We fully understand it will require system change at a number of different levels and therefore, it can’t be just government alone.”

According to Life-Yeomans, lived experience by survivors, and families must take the lead and be a high priority in actions and any solutions that are implemented. “For far too long, Indigenous women and 2SLGBTQQIA have been thought of only as recipients of services. There are many fully qualified Indigenous women who can lead this necessary change.”

Life-Yeomans shared her personal story with ANNews. “My mother was raised in NWT but did not live with her family for very long; she was put into residential school and then was adopted into a white family (60’s scoop). She ended up in an abusive relationship and left NWT for BC,” explained Life-Yeomans.

“She met my father and had two children with him, my brother and me, but she could not escape her pain. She was addicted to alcohol and drugs, and my father ended up with us.  She married another addict, and she was physically and mentally abused by him for years. She left him, but was again in another abusive relationship, this time she almost died.”

“Throughout all these years, my mom was missing,” said Life-Yeomans. “I did not learn of these events until I was older. She spent many years in the bad parts of Vancouver (East Hastings); she was almost murdered and was put into witness protection. She would call me once in a while, high or drunk, and tell me how she wanted her funeral and what songs to play.

“She passed away four years ago this coming June. I always say her spirit died back in residential school, as she was severely abused both sexually, mentally, and physically.  My mom loved her children and grandchildren with all her heart. She stopped drinking when I was in my 20s but stayed addicted to prescription drugs; she could never outrun her pain.”

Life-Yeomans had her mother in her thoughts the whole time that she was sitting on the AJWG and developing the recommendations. “She is one of the reasons I have such a strong voice. I hope that she is proud of me and not mad that I have shared her tragic story.”

Life-Yeomans said that her time working on the AJWG was very emotional and brought up painful memories. “I know I am fortunate in that my mom was not murdered and I had her longer than some.”

She commends Alberta Minister of Indigenous Relations Rick Wilson for his support of the AJWG. “He was a strong force and was supporting us throughout the whole process,” she said. “He has a great team that helped organize all our meetings, took notes, kept us on track and met all our needs.”

“There are many organizations throughout Alberta that support MMIWG2S+ and we will continue to work with them,” she added. “I firmly believe that the GOA has been hearing us and will continue to hear us going into the future.”

“I encourage all Albertans to learn more about MMIWG2S+ and educate your children, as this issue is not going anywhere,” concluded Life-Yeomans. “We all need to be part of the solution as it affects us all.”

The Alberta government recently received the MMIW working group’s final report and the province is now reviewing the report to study their recommendations and determine the next steps.

Be the first to comment on "Suzanne Life-Yeomans: All Albertans should learn more about missing & murdered Indigenous women"