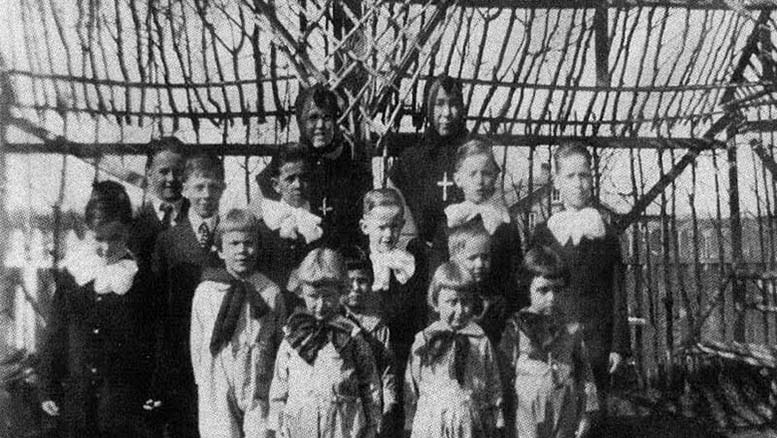 The walk, which is open to the public, will begin at 10 a.m. in front of St. Albert Place and proceed towards the Children’s Bridge and continue to Kâkesimokamik (The Healing Garden) where there will be a traditional ceremony represented by the First Nations, Métis, and Inuit communities.

This comes as the Metis Nation of Alberta’s St. Albert chapter Local 1904 is applying to the federal and provincial governments for funding to scan the sites of the St. Albert Youville residential school for Métis children, which operated from 1863 – 1948, and Métis Riverlot 56, which was open 1924 – 1968, with ground-penetrating radar. This is the same technology that uncovered 215 unmarked graves of Indigenous children near Kamloops, B.C., and the 751 on the grounds of the former Marieval Indian Residential School in Saskatchewan.

“It’s beholden on us,” Local 1904 president Bruce Gladue told CTV News. “This is our responsibility if we’re going to tell our story, the Métis Nation story.”

A survivor of Riverlot 56, which sat on the land now occupied by Poundmaker’s Lodge addictions treatment centre, George Muldoe told CTV that when he was 15, he and other residential school students dug graves in the freezing cold.

“We never did know anybody that we buried. There never was a preacher, no relatives, not even supervisors from here. A truck would literally throw them on the ground and it was up to us,” he said.

The city has some construction sites in the vicinity of the former schools, but has assured the MNA local that they will ensure there are no unmarked graves prior to construction.

The MNA chapter is working with the University of Alberta’s Institute of Prairie and Indigenous Archaeology Professor Kisha Supernant, who is an expert in ground-penetrating radar. Her grandfather survived a residential school.

She told CTV the National Centre for Truth and Reconciliation’s estimate of 4,100 children who went missing after being sent to residential schools is probably on the low side. “We don’t actually fully understand the scope and scale of loss associated with the residential school system,” said Supernant.

In a statement, MNA president Audrey Poitras said the provincial body will support the local’s efforts in any way it can, adding that people often forget that Metis people were victims of residential schools.

“Our Métis citizens and children should not get lost in the broader discussions related to residential schools. That’s why it’s important we do the ground truthing to identify any children buried in unmarked graves in the St. Albert area,” said Poitras.

“We will work to identify them, acknowledge their existence by telling their story and hopefully have those stories contribute to the healing within our families and to the process of reconciliation that needs to happen, and is happening”.