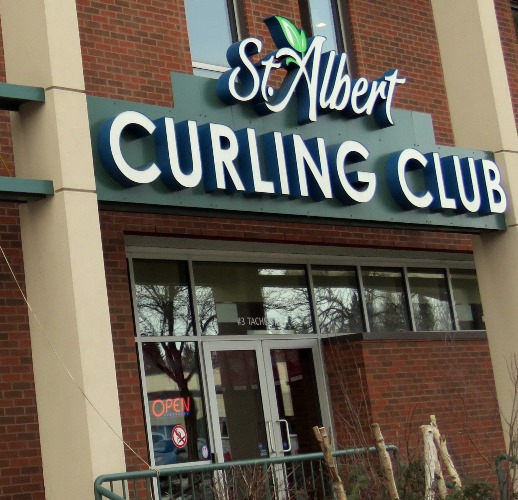 I watched a game between Casey Scheidegger’s Lethbridge rink and Edmonton’s Valerie (Val) Sweeting. Scheidegger, a former provincial junior champion and a skip on the World Curling Tour eventually lost to Sweeting, a Vegreville-born curler who skipped her team to a silver medal at the 2014 and 2015 Scotties Tournament of Hearts.

“It was fairly close match, and one that everyone here in attendance really enjoyed,” smiled Chester Perreault, the 68-year-old Head Ice Technician for the St. Albert Curling Club, in an interview following the event. Born and raised in St. Albert Perreault has been working with the rink since retiring from his job with the City of St. Albert more than 11 years ago. He’s been the Head Ice Technician for the past six years. 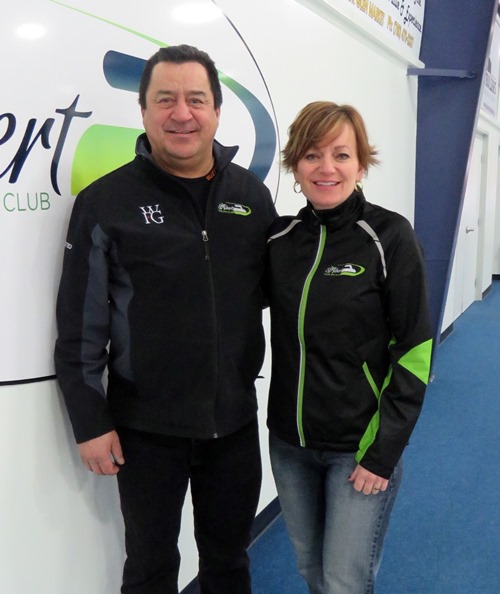 “We host a number of large bonspiels every year,” he explained, and the crowds really come out to watch events like this one. The winner of this game will go on to play one more this evening and that will determine who goes to the Scotties in mid-February.”

Sweeting lost that final match of the day when her rink came out on the short end of a 6-5 victory that won in the 10th end by the Shannon Kleibrink rink from Okotoks, Alberta.

Perreault and his assistant, Audra Lindsey, not only work in the rink by maintaining the ice surface, they also are responsible for teaching several others about the ins-and-outs of curling rink ice.

“We have a new fellow with us this year, Matt Nelson, who is currently in the process of learning the trade and two high school students, Matt Graham and Nick Oake who come after school and on weekends to help out and to learn more about the game and what it takes to maintain a quality  ice surface.

Well known professional curler Marc Kennedy, who along with Brent Laing and Ben Hebert plays with the Edmonton-based Kevin Koe rink, also participates at the St. Albert club, especially when the younger kids come to play.

“We have a program for the younger ages called Little Rocks, an initiative that sees seven to twelve year olds come out to learn the sport of curling,” explained Perreault. “Marc donated the rocks for this group, rocks that weigh 20 pounds each, about half that of the stones used by adult curlers. Having someone with his talent and reputation is really a great benefit to the rink and we are all very appreciative of everything he does for us.” 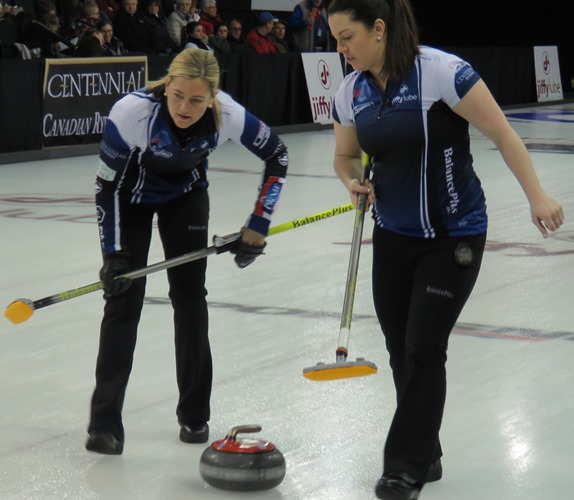 Lori Olson-Johns (third) and Dana Ferguson (second) watch their stone approach the house as they go on to win the semi-final by a score of 8-4.

In a conversation with Chester Perreault and the manager of the St. Albert Curling Club, Nicole Bellamy, I learned that Indigenous curlers playing at the rink are far and few between, something the pair would like to see change in the future.

“We have five or six hundred Aboriginal people living in St. Albert and we’d like to see more of them come out and try their hand at curling; they’d have a blast,” emphasized Perreault. Our manager holds curling clinics from time to time so a phone call to her would provide some further information on that. Nicole is very interested in exposing the sport to more people and works hard to meet that goal. Before coming to the St. Albert Curling Club she taught the sport at the University of Alberta.

“Curling Canada,” explained Bellamy, “puts on seminars known as ‘the business of curling symposium.’ The Northern Alberta Curling Association hosts these seminars from time to time and the idea is to promote curling in the communities. The most recent seminar dealt with the subject of how to bring more people from minority communities into the sport; the most recent conversation centered around how to get the Indigenous communities more involved. With such a small Indigenous community here in St. Albert, and because we really don’t know the right people to contact, we had a difficult time knowing how to get this movement started, so maybe this article will help to create some of that interest.” 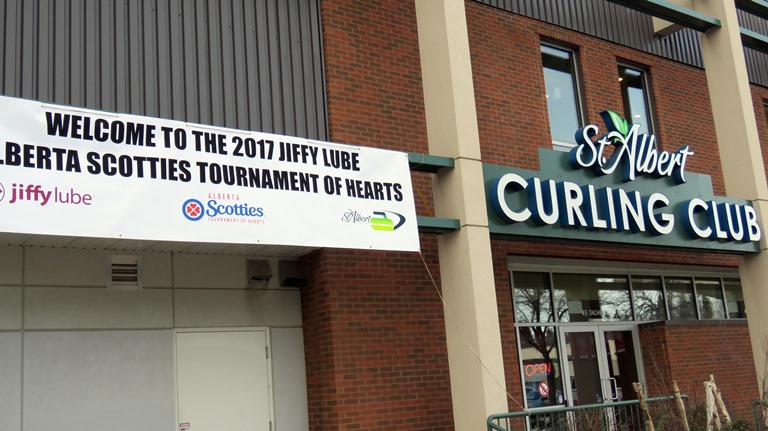 Youth, students, young families and families with school-aged children are the people most willing to take up a new sport or teach their kids how to get involved in sports participation; there’s no better time than now to do just that.

“We are always looking for new players,” emphasized Bellamy, “and you don’t have to have a team together to get involved. If you come and see us, we can put you on a team where everyone has similar experience and you learn together. Individuals are welcome to come down and inquire and we will do our best to make sure they leave with the information they need to become involved in this exciting sport.”

Most of the new teams are formed over the summer months in preparation for the following winter, the season when curling has its biggest impact.

“We do encourage everyone in the St. Albert area to come out and see what we have to offer,” noted Bellamy. “Call or email me and we can sit down and talk.”

Be the first to comment on "St. Albert curling rink welcomes new players – from beginners up"