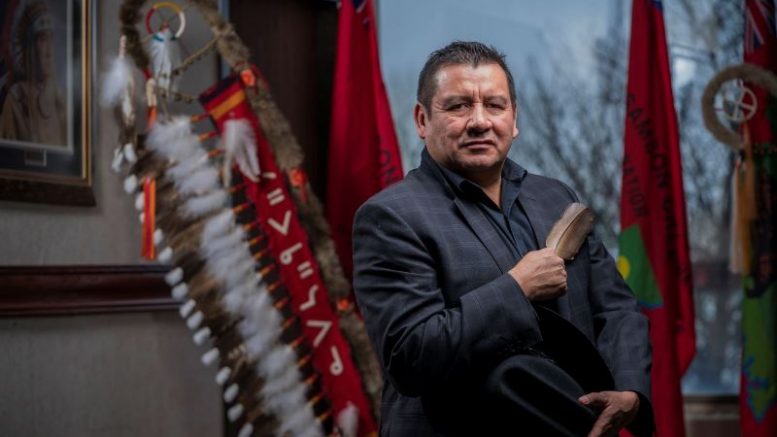 Carter Yellowbird graduated from the MBA program at Athabasca University in 2012.

(AthabascaU) – When Carter Yellowbird was a teenager living in Maskwacis, AB., he took a leap of faith. As a member of the Samson Cree Nation, he saw too many of his friends fall victim to alcohol and drugs. Some even lost their lives. Yellowbird knew he needed to forge his own path and that leaving home was the only way to go. “I’ve always been a go-getter,” says Yellowbird, a 2012 grad of Athabasca University’s (AU) MBA and a consultant who advises industry and Indigenous communities on development opportunities. “I needed to do something with myself – I needed to take chances.”

He quit school and with his father, Norman, a farmer and former chief who’d personally lobbied Prime Minister Pierre Trudeau for changes to the Indian Act, Yellowbird hit the road for L.A., with visions in his mind of sun and palm trees like he’d seen on TV. Instead the pair travelled as far as Riverside, Cali., just outside L.A. “I went with no money in my pocket,” he says. “I had a dream to get away and make something of myself, right?”

Though he had grown up riding, it was only in California that he began to take rodeo seriously, specializing in the roping tricks his father had taught him. Two years later he returned to Maskwacis and used his “18 money” – the portion of oil and gas royalties distributed to reserve members at the age of majority – to buy the truck and horses he knew he would need to compete in rodeo at the highest level. Soon he was working his way up the ranks, from amateur rodeoing meets to the Indian National Finals Rodeo in Albuquerque, N.M. In 1991, he became the first Cree to compete in calf roping at the Calgary Stampede, something he’d dreamed of all his life.

He spent three years in Paris, and even performed the dangerous riding stunts at a special show mounted at the foot of the Eiffel Tower. But after an accident left him with a broken hip, he returned to Canada, where a second misadventure put him in hospital with a concussion. Things needed to change. “I always tell kids,” he says, “when your vehicle breaks down, when you get in an accident, the best thing to have is insurance – that will take care of you. In this case, the insurance I needed was my education.”

Yellowbird quit rodeoing and earned a high-school equivalency diploma, then enrolled in the University of Alberta, securing a Native Studies bachelor and a minor in business. From there he became the business manager at Samson Oil and Gas and then began managing the $30-million Samson Education Trust Fund, which provides support for Samson Cree Nation community members studying at the post-secondary level.

He knew he wanted more, and turned to AU’s Online MBA.

“I wanted to get my MBA because I wanted to focus on business – First Nations are lacking in science, law, and business,” he says. “With my MBA I could get out there and see more, spread my wings more, and most importantly, be able to help First Nations in any capacity.”

After graduating in 2012, Yellowbird worked with the provincially funded Alberta Innovates Technology Futures.

He now has his own consultancy, and is currently undertaking a feasibility study for on-reserve, for-profit seniors homes that would cater to Indigenous elders, with traditional singing and foods, while still connected to the off-reserve geriatric care industry.

The bulk of Yellowbird’s work is looking at different strategies that bring industry and First Nation people together and get them ready for the world at large. He sees education as fundamental to that goal, and each year, his Carter Yellowbird Indigenous Bursary awards an Indigenous student at AU with $1,500.

“You know, going to Paris as a kid was a big culture shock,” Yellowbird says. “Just think about a First Nations person at that time going off the reserve to work.” That experience has defined his work today: helping others jump into the unexpected.

AU learner a shining star in the nursing community