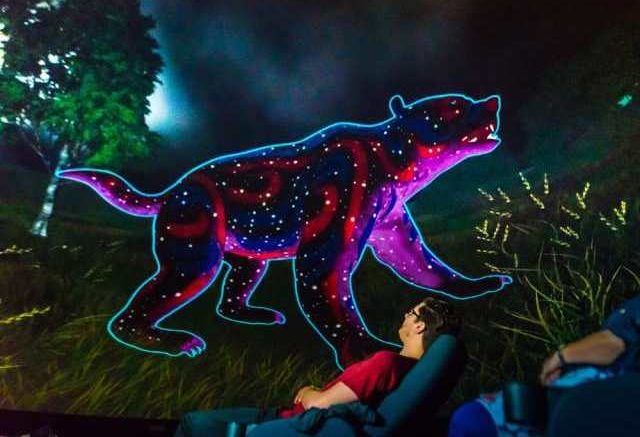 'Legends of the Northern Sky' is a stunning Indigenous themed full dome show that is currently running at the TELUS World of Science in Edmonton.

“We are so incredibly proud of this show,” remarked Alan Nursall, Telus World of Science President and CEO.

“It was one of our goals when we opened the new Zeidler Dome, to create a stunning full-dome show that would not only showcase the ability of the Zeidler Dome, but also pay tribute to Canada, Indigenous peoples, and the North.”

Narrated by Julian Black Antelope, the film blends animation and technical expertise to share the tale of Ocek, the fisher, who’s joined by a band of animal friends on a dangerous expedition south to retrieve summer and return it to the frozen north. To the Plains Cree, Ocek was forever running across the night sky, ensuring the arrival of summer after the cold, perilous winter. Their adventure is mapped in the stars as each night they have to  chase away the great bully, the bear Mista Maskwa. 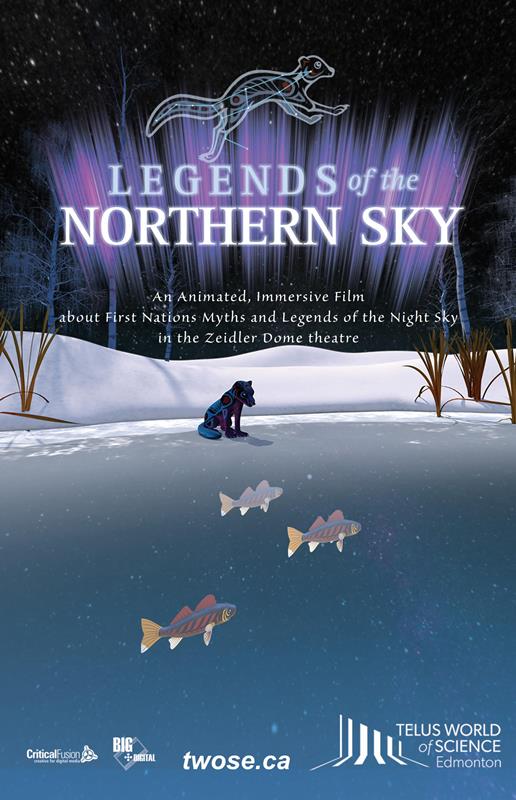 This stunning spectacle of explosive light and color is not just a cosmic expedition through the landscape of the northern sky, but a resource specially designed to supplement the Alberta educational curriculum. The film covers social themes like friendship, teamwork, perseverance and dealing with bullies as well as many science themes at varying levels of study.

First grade students can relate their classroom learning to Legends of the Northern Sky’s discussions of season changes and the needs of plants and animals for the sustaining of life.  For grade two students, who learn about diverse communities within Canada, they can identify the valuable connection between Indigenous cultural belief systems and the natural environment.

Grade three students are able to understand natural life cycles and see through the presentation, real-world examples of their studies.  It is the historical discussion of Alberta’s Indigenous peoples that parallels the grade four curriculum, and grade fives see how cultural identities are shaped.  Grade six students are able to see a marvelous manifestations of sky science – a core component of their education for the year – while grade nines can relate to discussions of space travel.

Legends of the Northern Sky is an ideal excursion for children of all ages and appeals to both youngsters and adults.  Upon entering the Zeidler Dome, patrons can seat themselves in one of the planetarium’s cushy recliners, while little ones rush to snuggle up on the raised circular stage in the middle of the space.  Amidst a pile of big pillows, children lay back beneath the domed projector gazing upward as if there were nothing but sky above them.  The presentation itself mixes science and storytelling into a lovely harmony of family entertainment.

A simulated campfire setting helps to transport audience members into a state of relaxed learning as the voice of one man seated near the fire (Julian Black Antelope) begins to narrate the sky’s endless twinkling lights. The science of astronomy comes alive as the narrator tells the tale of the pictures he sees in the sky – the legends handed down to him by his ancestors.  He explains that as the seasons naturally transition, so too do the images above.

Although there is so much more to say about Indigenous wisdoms and teachings related to astronomy and the northern sky, this 25-minute sneak peak is an exceptionally rich introduction to the topic.  Following the experience, little ones will almost certainly ask to venture out of the glare of urban light pollution for the opportunity to turn their attention to stories of the velvet celestial canvas above them in Legends of the Northern Sky.

General admission to the Telus World of Science includes a trip to the Zeidler Dome, so anyone interested in this must-see experience should make a day of it and experience all the eye-opening exhibits offered.