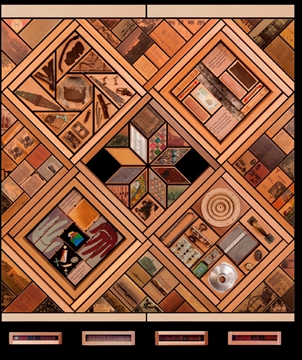 (ANNews) – The Town of Peace River’s Museum, Archives and Mackenzie Centre will host the travelling Witness Blanket monument/memorial in its main gallery from July 1 to August 27 thanks to an exciting collaboration with the Sagitawa Friendship Society (SFS).

“This is a unique and important project and we’ve spent nearly a year preparing for,” noted SFC Executive Director Tracy Zweifel. “We are all very excited as we prepare for Opening Day.”

The Sagitawa Friendship Society works with many individuals and partners with numerous organizations and institutions during its administration of many key initiatives and programs instrumental to its ongoing success in the community. One of those partners in the Peace River Correctional Centre. 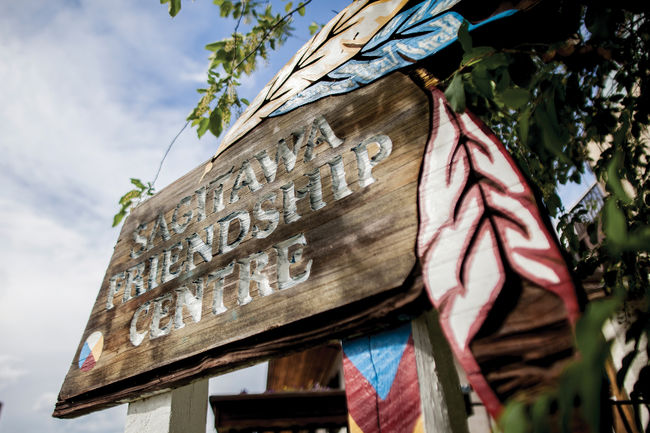 “We are working with different groups in the community, including the Corrections Centre on initiatives that include exploring and hosting workshops on the recommendations of the Truth and Reconciliation Commission, and most recently we are delivering workshops on the “I AM A KIND MAN” initiative developed by Ontario’s Friendship Centres several years ago. As a result of our ongoing work with Alberta Corrections, two of the Witness Blanket panels will be set up at the Peace River Correctional Centre, where they will remain until August 27.”

The Witness Blanket is an extraordinary and monumental project created by British Columbia artist Carey Newman to recognize and honour victims and survivors of Canada’s now defunct Indian Residential Schools (IRS). The large 12-metre-long by 2.5-metre-high display, shaped like and reminiscent of a quilted blanket, includes more than 860 objects gathered from 77 communities across Canada. The objects themselves bear witness to the harsh realities and consequences of an archaic and brutal school system that saw children taken from their homes and forced in one of the more than six dozen government-orchestrated, church-run institutions that dotted the Canadian countryside for the better part of two centuries. 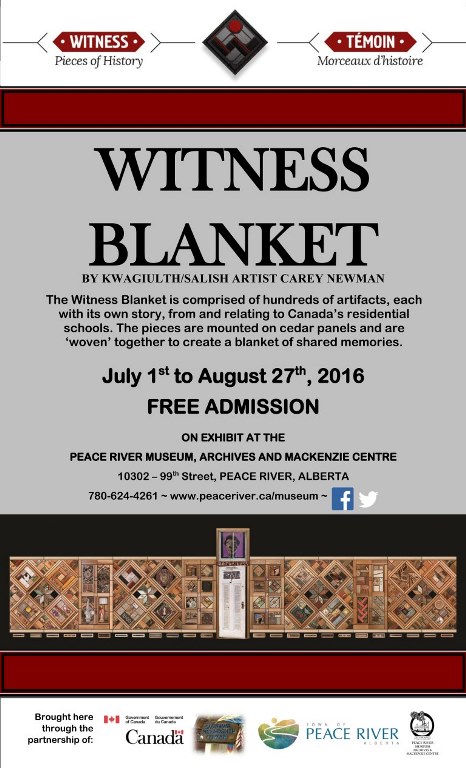 The Witness Blanket project took painstaking effort and several years to construct and is now in the process of making its way into Canadian cities and venues interested in hosting the memorial. Since January 2015 the monument has been erected and showcased at venues in Regina, Calgary, Ottawa, Hamilton, Sydney, Millbrook, and Winnipeg.

“We are very pleased and honoured to have been chosen as a venue for the historical undertaking,” assured Zweifel, who noted that “in addition to the panels, a multi-media presentation within the installation connects viewers to IRS experiences in a personal way.”

The blanket is culturally significant and recognized in the Aboriginal community as a symbol of protection and strength.

The project, noted Newman, “was inspired by the woven blanket, the universal symbol of protection. The Witness Blanket comprises items reclaimed from the residential school era of Canada’s history; it will recognize the atrocities of that era and has been designed to both honour the children and to symbolize ongoing reconciliation.”

As requested by the artist, during the Witness Blanket’s time in Peace River, admission to the museum will be free.

“This is being made possible,” explained Zweifel, “by a motion from Council for us to waive the fees this summer and by the financial support of the Alberta Union of Public Employees Local 101 and Shell Canada.”

After leaving Peace River at the end of August the Witness Blanket will visit Vancouver Island University, in Nanaimo, (October/November), before moving on to the New Westminster Museum and Archives from December 2016 – April 2017. 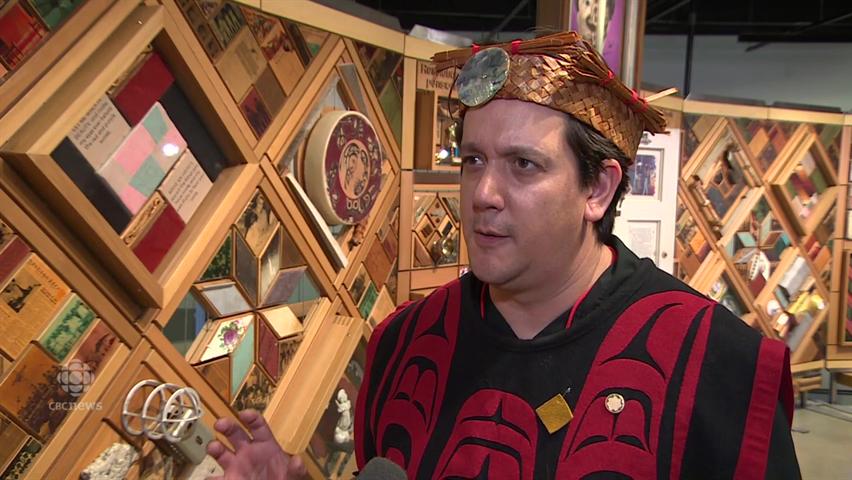 Master Carver Carey Newman is a prominent Kwagiulth artist, entrepreneur and visionary. When he began the Witness Blanket project back in 2013 he hoped to create even greater awareness of the issues facing survivors and victims of Canada’s former Indian Residential School (IRS) system.

“This era in Canada’s history has caused more shame and indignity to the Indigenous peoples of this land than most people can imagine,” said Newman at the time. He said that he grew up not realizing the depth to which he was personally affected by a residential school system designed to assimilate Aboriginal children by denying them access to their families, their culture, their languages and their way of life.

“The true history of the Indian residential school system and the impact that it has had on Indigenous Canadians, is difficult and often emotional,” noted the artist, “but it is a history that needs to be told. The social consequences of those schools, and the multi-generational impact that is still felt today, need to be recognized and understood by all Canadians.

“It is our hope that the Witness Blanket project will help to create awareness amongst mainstream society so that we can begin to work together to make positive change.  This is the only way to create what everyone wants – an equal footing and an equal opportunity. It is out hope that people from every community across the country join us by standing witness to this important part of Canadian history. We, as a country, need to honour these survivors and remember the children who were lost.”

Newman realized his goals and his wish is coming true. His project has opened tens of thousands of eyes and Canadian society is more aware today of the atrocities that have been perpetrated against Indigenous cultures than ever before. The recommendations that came forth after the Truth and Reconciliation Commission’s (TRC) six-year investigation have gained support in every corner of the country, including the offices of the provincial and federal governments.

Carey Newman comes from a long line of well-known artists. He’s a fifth generation carver whose cultural knowledge and artistic skills were learned early in life.

“I get a lot of support from my family and from the Elders in our community,” he assured, “and I am able to draw upon the cultures of my paternal grandfather (Kwagiulth) and grandmother (Coast Salish) for inspiration.”

Always seeking to improve his skills, Newman is an accomplished artist who works with a variety of medium, including wood, glass, stone, gold and silver. He’s also an accomplished painter who follows in the footsteps of his father, especially when it comes to artistic integrity, self-respect and quality of workmanship. In fact, artistry is in his blood. His father Victor, his great, great grandfather Charlie James, and his great aunt Ellen Neel, are all renowned wood carvers.

Newman also owns and operates Blue Raven Gallery, a venture he launched in 1996. Click here to learn more about the gallery and to view some of Newman’s breathtakingly beautiful wood, stone and precious metal carvings.

Click here to learn more about the Witness Blanket project.